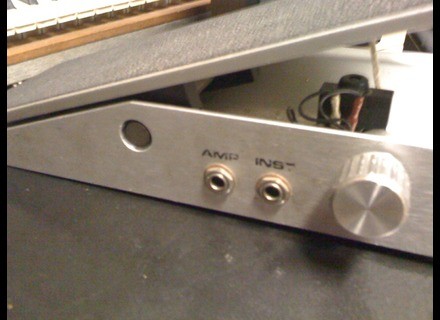 Volume (No reference), Volume Pedal for Guitar/Bass from Ernie Ball.

Ernie Ball Volume (No reference)
4
This is a volume pedal, one of, it not the most simplest pedal ever made for guitar. It's simply a 250k pot controlled via a string, some pulleys and a spring. This is an older 6166, and by that I mean so old it doesn't even have the model number on it. But considering the 6166 is the most basic volume pedal, I'm sure this must've been the predecessor to the 6166.

Just one in jack and one out jack. Nothing else!

It's older so it's not as well thought out in terms of layout, even though there's almost nothing to lay out except the placement of the input and output jacks. Which, aren't laid out properly haha.

The in/out jacks are on the SAME SIDE, both on the right! Which in today's world is completely inconvenient for chaining to other pedals or boards! I like to have my pedals lined up like the signal chain I have it in, with this inconvenience, I can't do that, AND I need a longer patch cable to get to the other pedals. It's really not well thought out.

Otherwise, the pedal motion is quite smooth. I had to replace the string/spring since it's so old, the old string was wearing out. More on that later.

Not much to say otherwise!

It produces no sound, it's used for swells or muting between guitar changes or song changes or tuning etc, things of that nature, what I COULD comment on in terms of sound is how evenly balanced the swelling is from heel down to toe down position. In which case it is smooth, though I don't think it's perfect. It could be the pot, maybe it's not as linear as others? But it seems that from heel down to about 2/3rds through the signal comes in, and the main volume difference is noticed from before then. Going all the way to toe down position is sort of not dynamic enough for me, it's a bit too subtle or just jumps right to full volume. Sort of like there's a sweet spot range where the swells can be the most dynamic and NOT within the entire range of motion of the pedal.

However, I could still get it to do what I want.

Overall it's decent. It's a volume pedal, and unfortunately there hasn't been anything too revolutionary with volume pedals aside from maybe the visual volume, which even then isn't that big of an improvement on the overall function of a volume pedal. I will review that eventually.

My one beef with this other than the range of motion not being as wide as I thought, would be the string replacing kit. It's actually VERY difficult to do properly!! It took me nearly 2 hours or so to replace these strings! I don't know how the employees do it! it was HARD! Even now I don't think I did it right, but it seems to be working so I'm just gonna leave it as is until the string wears out or until I grow more patience to reattempt the install.

I got this for free from a friend! But I know they're also quite cheap. Volume pedals usually are within $100 or less. It's definitely sturdy though, super hard steel chassis and all. I don't expect any problems except the strings, which are problematic with all volume pedals that are designed this way. So it's expected, and will most likely not break or wear for a very long time.
Did you find this review helpful?yesno
»

Ogmor's review (This content has been automatically translated from French)

Ernie Ball Volume (No reference)
5
A volume pedal simple, without tuner output or setting minimum volume.
Like other pedals Ernie Ball volume, it uses a pulley system with a cord and a spring in Kevelar.
Very simple mechanism, but imposing building. Me it does not bother me, but compared to taillpar mechanism may in some fiddle. In any case, the construction makes the aluminum indestructible!
Knob 250k, so a priori designed for passive electronics.

On mine, the crachotte knob slightly, nothing rédibitoire a live volume, you can not hear if the pedal is actuated without playing. The sound of the guitar covers. It must be because she is old. At worst, a new knob costs 20 euros.

The only downside of this pedal is that the pulley system with a cord implies that the latter wears out. the rate of wear will depend in my opinion the use that one makes, but once we were able to assess after how long the cord breaks, it should have the same foresight that with the strings of a guitar: it breaks do not wait for change. The kit parts (cords and spring) costs less than 4 euro on thomann, so the money is in my opinion not a problem!

This is exactly what I wanted: a progressive course, with a large enough amplitude. It allows me to make violings with delicacy, and also to balance the volume of my guitar (and therefore the gain if it is placed in front of a façade or pedal) quite easily and quickly, no need to find the precise position milimetre loan. The "minimum volume" function is not needed with this pedal is used fairly instinctive way.
And this is where the advantage of the cord and pulley system: the length of the cord used to make tiny movements of the plate are accurately transcribed on the potentiometer, I do not think that we can be as progressive and delicate race with a rack system.

I have not tried other pedals volume: I just read carracteristiques many pedals. What attracted me to this model is the strength of the pedal malgrés that the cord must be changed from time to time, and the fact that it has a very progressive and full race. I want to do the violing, lower the gain of my distortion, and to rise again very gradually, this pedal is right for what I need.
the fact that the input and output are on the same side (right) may be the only design flaw for the greater world, but the chance that saw the organization of my pedalboard, it suits me!

See all 101 photos of Ernie Ball Volume (No reference) »