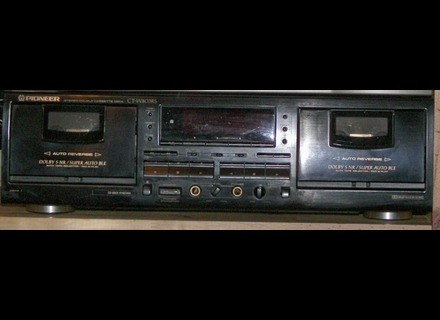 CT-W803RS, Cassette Deck from Pioneer in the CT series.

- What thing do you like most/least about it?
Most: it's probably the best you get without going into digital noise reduction, which came out afterwards and which had a signal/noise ratio of 90dB, whereas this is probably closer to 80 max.
Least: it's clunky when you operate it. It's very noisy when you press any button, not smoothe AT ALL in its operation.

- Did you try many other models before getting this one?
Oh yeah, lots with Dolby B...but this has B, C and S !

- What is your opinion about the value for the price?
Dont laugh: this was 2250 Francs at the time (£225 back then). Yes, you heard me. Amazing, eh? I even had this way before i had a CD player...
Later, the digital Dolby noise reduction came out and i hesitated to get it but i don't think it did Dolby S so then i was stuck...
Of course, for the same money or less even you could get a MiniDisc recorder, which i did too...

- Knowing what you know now, would you make the same choice?...
Yes, actually, because this was the best spec at the time for that money, and it did come in handy more than once: it has 2 recorders so u can record in parallel to both at the same time, which is handy when duplicating many cassettes or rather one recording onto many cassettes. Both recorders are also auto-reverse, and have space search, so you can find the next song rapidly by pressing the search button.
It also has a &quot;FLEX&quot; button, which is an auto-EQ of the sound and that is a major enhancement to many recordings!
The only thing that could make it better is digital NR...and smoother operation.
Did you find this review helpful?yesno
»