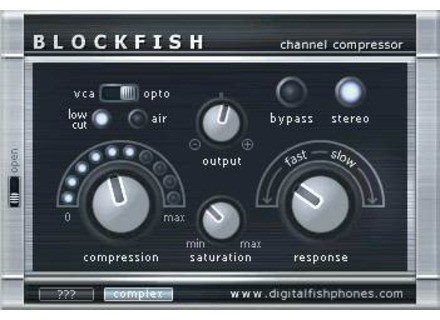 All user reviews for the Digital Fish Phones BlockFish

Average Score:4.5( 4.5/5 based on 2 reviews )
Value For Money : Poor
Not satisfied with those reviews?
Our members also liked:

Digital Fish Phones BlockFish
4
Digital Fish Phones' BlockFish plug-in is a free piece of software for compression. All of Digital Fish Phones' plug-ins are free, and this one is part of three 'Fish Fillet' plug-ins that were created by an independent developer a little while back. It's available for Mac and PC platforms and in VST format for both and AU for Mac. You can download it straight from the Digital Fish Phones website, which only takes a minute as will be the case with installation as well. Learning to use the plug-in isn't hard at all, although there are two layers to it. The main section has parameters for compression level, response, saturation, and output, as well as two modes to choose between - VCA or opto. You can also make further adjustments in a section window that has parameters for low cut frequency, opto memory, air frequency and level, saturation emphasis frequency, and dynamic saturation. It's all easy enough to follow, but I'd recommend sticking with the main parameters to start and work from there as needed. I don't think there's a manual for BlockFish or any of the Digital Fish Phones plug-ins, and if there is I haven't seen it.

I don't have the Digital Fish Phones BlockFish plug-in anymore, but I used to use it in Cubase SX 2 and 3.0 when I was using mostly free plug-ins and didn't have as many as I do now. I was running it on a PC with a Hewlett Packard Pavilion dv8000 laptop that had a 3.0 Ghz processor and 2 GB of RAM. I used this plug-in a lot and multiple instances of it at once without issues on this system. I'm sure it would run even smoother on my current Pro Tools rig (using the Fxpansion wrapper), but I really don't have a need for it.

If you're looking for a free compression plug-in, the Digital Fish Phones BlockFish plug is a must have. I have a lot of more professional plug-ins that I use at home now, but when I didn't have as big of an arsenal, I used this one a lot. I used it a lot on drums, especially kick drum, as it's good for hitting your signal really hard. It can be more subtle but I didn't find that it sounded as good when used in this capacity. I haven't used it in a few years but since I've got the Fxpansion VST to RTAS wrapper, maybe I'll try it out again sometime soon although it's really not necessary for me since I've got a ton of great compressors in the box already. Definitely check out the full line of Digital Fish Phones plug-ins and BlockFish if you're able to run them, as it's quite solid for a freeware plug-in.
Did you find this review helpful?yesno

Micky201's review (This content has been automatically translated from French)" Monstrous"

A compressor is very colorful, which sounds in the style of 1176.
The sound is terrible! There are many options:
Adjustable-Saturation (intensity, frequency)
-Mode complex adding power
High-pass filter and optional air

In short, many more options for setting a normal compressor, emulated the 1176. The sound is very flexible and we get the color you want, very versatile (in the style somewhat / very colorful). I think it would suffice instead of paying to buy a plug in the same style. In short, sound really good with a beautiful color and sharp as desired.

I am always amazed that plugs cheap or free does not attract the crowds that are obsessed with brands and prices. If this plug and had to pay dear, I'm sure there would be a plethora of opinions on it.