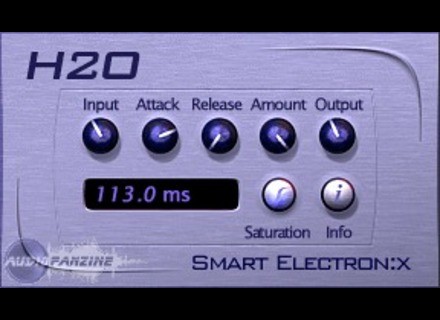 Smartelectronix H20 [Donationware]
4
The SmartElectronix H20 is a compressor plug-in that can be downloaded for free in VST plug-in format. I'm not running this plug-in anymore since I switched from Cubase SX to Pro Tools a number of years ago. From what I can remember, the process of installing this plug-in wasn't a problem, and finding a download of it is very easily done as well. The interface of H20 is even simpler as it only has a handful of plug-ins to work with, including for input, attack, release, (compression) amount, and output level. There is also a 'saturation' button. I'm not sure that a manual was even made for this plug-in, but one isn't necessary either way.

Until a few years ago when I switched from Cubase to Pro Tools, I was running the SmartElectronix H20 plug-in on a Hewlett Packard Pavilion dv8000 lap top PC computer with a 3.0 Ghz processor and 2 GB of RAM. This wasn't a plug-in that I used all that often and really used it sparingly, so I can't say I really tested the water in terms of how many of these I could run within a single session. Having said that, the plug-in certainly doesn't seem to take up much processing power, and being that it is free anyway, you can just try it out for yourself on your own system to see how it runs.

I can't say that I would have had the SmartElectronix H20 plug-in in my arsenal if it wasn't free, but being that it is free, I'd recommend that those with a VST compatible platform download it to try it out for yourself to see if it's something that might be useful for you. I will say that there were a number of other free compressor plug-ins out there that I used instead of this one, including the Kjaerhus Audio Classic Compressor. While certainly not the highest quality compressor, it's a free one nonetheless.
Did you find this review helpful?yesno
»