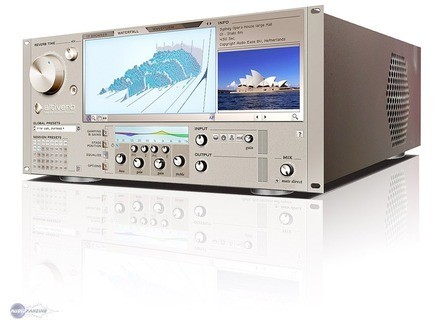 Audio Ease Altiverb 6 Regular
5
I use this in both Logic 9 and Ableton 8 and I have had no compatibility issues. Yes, the manual is clear and sufficient. If you are familiar how reverbs work, you only need to reference it for certain things specific to this software. Yes, the general configuration is fairly simple. All of the parameters are easily accessed.

Yes, the software works great with the exception of one problem. I had initially setup up the IR samples to reside on an external hdd but I found that everytime I opened up the plugin, they were not showing up. All I had to do was go into the settings and point it back to the HDD. After a week of that I just decided to put in on my internal hdd and have had no problems since. The performance is great. Switching between presets is quick and simple and there is no clicking noises when doing so. I have been using this plugin for about 6 months now.

What I like most about this unit is the reverbs are top notch. I expected really good reverbs for the price, but I was very impressed when used in our studio. We have a few hardware reverbs and I still like to use them for their specific characters, but I find myself pulling this out way more often. Most likely due to its convenient home in my computer but also because it is just so great sounding. Other than the issue with the samples not showing up when using the ext hdd, there are no problems. $500 is a lot to spend on a plugin, but if you are doing a lot of work and want access to a lot of different high quality reverbs, this unit will make you very happy even at that price point. 10 out of 10 for software reverbs. It is really the best one I have used to date. I have used a lot of other reverb plugins (audio damage, built in Logic and Ableton plugins, lexicon which were pretty good, etc....) Yes, I would buy this again.

Audio Ease Altiverb 6 Regular
5
The Audio Ease Altiverb 6 Regular plug-in is an extremely in depth reverb modeling piece of software. It comes in pretty much all formats as you can get a TDM, RTAS, VST, or AU version of it. I didn't have anything to do with the installation of the software, as the studio that I used it in already had it installed and running. The interface of the software certainly has a lot of features and options to offer, but I still found it to be user friendly and easy to understand. The plug-in has so much control over your sound that it would simply take too long to list here, but just know that this is one of the most in depth reverb plug-in I've used. It also offers up a lot of different preset rooms, so you have a starting point. I've never had access to the manual for this plug-in, so I don't know how helpful it would be.

I have run the Audio Ease Altiverb 6 Regular on a Pro Tools LE system with a powerful Mac computer and a Digi 003 audio interface. I can't say that I've had any issues running the plug-in, but I've only run up to three instances of the plug-in within a single session, as I always run my reverb plug-ins on auxiliary channels to save processing power. This is definitely a plug-in that will take up more processing power than most, but as long as you use the power wisely and don't go too crazy with it, a good system should be able to support it without a hitch.

I can't say enough about how much control you have over your sound with the Audio Ease Altiverb 6 Regular plug-in. It has a top notch sound quality as well, as everything is sampled from a real environment as far as I know. The price is about the same as TL Space or any other in depth reverb, so this shouldn't be a deterrent. If you looking for a top of the line reverb emulation plug-in, look no further as I know you'll thoroughly enjoy using Altiverb 6.
Did you find this review helpful?yesno
»

zarboa's review (This content has been automatically translated from French)" good but be careful .."

Audio Ease Altiverb 6 Regular
3
installation a little sport at the time because each load of Altiverb made me leave suddenly pro-tools .. but now all is well.
other than that the config is simple and functions are clear

I just give my opinion to shade a little enthusiasm.
Yes, it's a nice software interface that allows you to stroll in the places where the spaces were recreated sound is very pleasant. The large cathedral type reverbs etc are beautiful and some other areas are interesting but it is often very cold and and can not (in my opinion) use of reverb to do everything .. virtually unusable on the votes, not to mix with lots of instrumentals (I mean more than three or four). So it's still a good budget this reverb and if you want to buy but can not invest in other reverbs further think about it ..
There is the Sonnox (after I finally bought Altiverb) which is cheaper and can adapt to more situations heads, it is also warmer and very customizable, this is I wanted to write this review for my experience can be used for other and perhaps avoid a casting error.
PS: Of course I do not work for Sonnox

electik's review (This content has been automatically translated from French)

Audio Ease Altiverb 6 Regular
5
Nothing special to install (iLok or Challenge Response to choose from!)
The site gives much info.
A lot of original pRSET pluttrussis.

Trs is greedy and plant sometimes change pRSET.
Otherwise it is stable in use.

This is rverbe Silk:
Everything comes out soft and never artificial magnificent ... space on more subtle than radical, everything is an incredible ism. Convolution thank you!

A complter rverbe when even a more "classical" for the effects spciaux or solo certain tracks because it's a rverbe "mood".

I got much better than its direct competitor in WAVES.

Some things are when you taste that can not live without.
Did you find this review helpful?yesno
»
Read the 5 user reviews on the Audio Ease Altiverb 6 Regular »