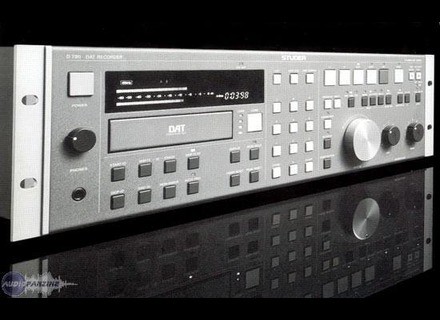 Submitted functions (in addition to the ordinary functions of a DAT):
<ul>

Select 44.1 or 48 KHz possible for numrisation (via analog inputs, therefore)

Fade in, fade out and pause 3 seconds during recording

Select the clock sync (Worldclock, Via numrique between internal or "9.6K")

Among other things (I did not understand everything, not having the user manual)

Too bad I have no instructions as there are functions that I can not operate and clear up points. As such, there is a speed controller. I know the turn - the disable but I do not know rgler. Or example, there ports RS 232, RS 422 and ES-BUS, I know they are transmitting as give give but what? That might need to pass as give a DAT? Is it controllable by computer? Can it be used as streammer? Without instructions, hard to say ...

The main thing that I can not matriser without the user manual is how to know what frquence Sampling is used in the band being in the costs or a digital signal ( S / PDIF or AES / EBU) input. In fact, I'm injecting a 44.1 KHz signal into the machine and listen to a tape in 44.1, the device tells me always 48 KHz. Not having the user manual, it yasr something m'chappe. Can anyone help me?

It is equipped with super good converters, a lightweight better than my Tascam DA-P1, notament mdiums ralistes more acute and played with more finesse.

The only thing missing would be a memory buffer that would allow what the dclanchement the break (playing or recording) is instantaneous and ds then it should also be a wheel in order to be able to Joggle calibrate the sample prs. Anyway, I quibble ^ ^ And also, I have never seen such functions on a DAT up Submitted.

In addition, it does not seem to be made to be transport Premire ear (a scne another example), it drgle easily mcaniquement speaking. It is designed to be installed once and for all in the studio that's it. It took me several hours to run it for the "Drouille" before they can make oprationnel. And still, drop-out numriques remain on some tapes while on the Tascam, the tapes are reproduced without Manir impeccable drops-outs. But hey, I'm the hand and gives it shows its visual state: it has VCU ^ ^

Control buttons sweet and enjoyable to use

No memory buffer for pause button and no possibility to calibrate the sample prs, damage to a DAT of this class.

This is not the first DAT recorder I had (Sony TCD-D3, and my current Yamaha DTR2 Tascam DAP-1) but the first that is truly pro (possibly from the Yamaha and again, is a semi-pro). Well, I did not really need to have a second DAT, my Tascam enough for me but I had this really a price Studer drisoire Used (179 CHF Cash'n Go!! ! - approx. 105 euros !!!!!), drisoire so that when I saw that price, I could not m'empcher jump on the opportunity, especially given the number of DAT tapes I ^ ^

This format is endangered, even for the studio (August 2007). The audio CD recordable, CD-R or even see the DVD-R, much cheaper, less fragile and more reliable, has largely supplanted. To the sound outside, it's portable recorders on flash cards (eg Nagra BB + Ars, Fostex FR-2, Marantz PMD671, etc.). Which overrides the era, but my first DAT (beginners 1990s), I had no other choice for long-term preservation of audio documents.