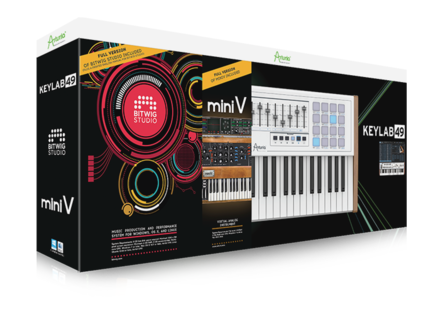 Arturia Producer Pack 49
5
I needed a controller and after seeing the ad for this bundle, it seemed like a good solution to get a 49-key keyboard with a license for a DAW that wasn't too different to Live, which I've been using for a long time.
I don't regret having been unfaithful to Ableton, Bitwig is a bet on the future and it provides all of Live's main functions, I can only encourage people who want to do the switch.

When you open the box, you find the 49-key controller, impressive due to its weight, which gives you confidence right away, plus the USB cable and the Bitwig CD.
I downloaded the software directly from Bitwig's site, because I have a problem with my CD drive. The installation was really fast and without any issues. The scanning of my sample library and VSTs was smooth.

I then installed and activated Arturia's AnalogLAb software, no problems either. I had some issues installing the Minimoog V software, the activation code wasn't recognized, so I sent an e-mail to Arturia to solve the problem. Two days later everything was working fine.

Controlling AnalogLab with the Keybord49 is pretty logical, browsing the menus from the keyboard is pretty smooth. The sound of the software is very good. After only two seconds I started to think I was Jean-Michel Jarre. The quality of the keyboard itself may be questionable, especially regarding its sturdiness, time will tell.

Everything was working perfectly when suddenly the knobs started sending random values or even nothing at all!
I informed myself and realized that I hadn't the latest update from Arturia, which fixes this bug, so I downloaded and tried to install the update.
Tough luck! A problem prevented the update, so I wrote a second e-mail to Arturia to solve the problem, which apparently is caused by Mac's Yosemite and is not an issue with Maverick.

There's one thing that should be said about Arturia's support, they are always there and never leave you stranded. That is crucial to establish confidence between the users and the manufacturer.

Ever since, everything works fine, I'm thrilled.

Granted, it didn't go that smoothly, but everything got fixed and I prefer to keep the good things. Incredible value for money. Just try to get each of the items included in the pack individually:
Bitwig Studio = 248€
Keylab49+Analog LAb = 299€
MiniMoog V= 99€

Based on my experience with it, I would buy it again with my eyes closed and hands and legs tied.
Did you find this review helpful?yesno
»
Read the 2 user reviews on the Arturia Producer Pack 49 »

Published on 10/09/14
Arturia partnered with Bitwig to design home studio packs featuring a MIDI keyboard controller and a software bundle.