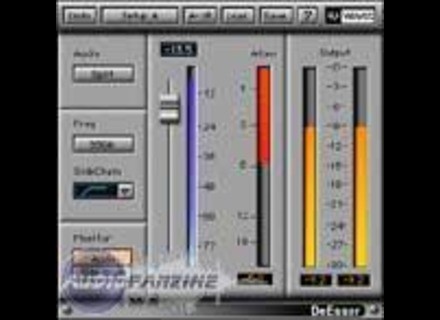 All user reviews for the Waves DeEsser

Average Score:4.3( 4.3/5 based on 3 reviews )
Buy this productView price information >
Not satisfied with those reviews?
Our members also liked:
Buy at Sweetwater

Waves DeEsser
4
Waves DeEsser is a software effects plug-in to be used in a DAW. All Waves plug-ins can be installed by downloading them off the Waves website. Authorization is completed using a USB stick as a dongle, or using an authorization manager application if your computer connects to the internet.
Waves plug-ins are known for working well without bugs. The 'DeEsser' plug-in has been around a long time and works in all popular DAWs.

De-essing can be a very important part of mixing.Sometimes you can get by without it. However, if a vocalist makes really loud 'esss' and 'essshhh' sounds, it can ruin everything. If do almost any mixing, and don't have any method of 'de-essing', you really should consider adding a 'de-esser' to your arsenal. The Waves DeEsser is cheap. It is really simple to use, and the controls are pretty self-explanatory. But, it has just enough flexibility to get good results.
I received the Waves DeEsser as part of the Gold Bundle. I have tried using it, but found that I actually like 'de-essing' with the 'C1' better. It adds a little bit more control than the DeEsser.
Although, 'de-essing' is most commonly used for vocals. I also recommend using it on electric guitars, especially if they have a lot of distortion. In this case, you would only want to compress the problematic high-frequencies using split-band mode rather than wide-band mode.

De-essing is often over-looked as a mixing technique. A de-essing specific plug-in a really nothing more than a frequency specific dynamic compressor. This kind of processing can be achieved with a standard compressor by using a side-chain input. Waves made it really simple to 'de-ess' by creating a specific plug-in where the side-chain is set up internally. Not only does this plug-in make it possible to compress a signal based on the energy in a specific frequency range (wide-band de-essing), it also makes it possible to compress a particular frequency region without compressing a lower frequency region (split-band de-essing). Depending on your application it may be more appropriate to choose one method over the other.
Buy at Sweetwater
Did you find this review helpful?yesno

Waves DeEsser
4
Sibilance is the number one issue when it comes to recording things like spoken words and talk shows. The big issue is that you have those "shh" and "ess" sounds that really can kill your ears and sound utterly annoying. To combat that, you use a DeEsser. The Waves DeEsser is awesome and very simple to use. You have a simple slider that you adjust to reduce the amount of sibilance in a mix. There are also some small buttons to adjust the slope and how everything functions. To use this, you simply enable it on your vocal buss and start adjusting. I didn't experience any compatibility issues, so I can't comment on that. I never read the manual, but I don't think it's really necessary for these plugins. It's very easy and simple to use, so no issues there.

This has saved me many times with spoken word mixes. Battling sibilance can be a total pain, but this plug makes it super simple. It's easy to use and easy to get a good result without much fiddling. For anybody who is having issues with vocals, I highly recommend checking this plugin out. It could potentially save your mix.
Buy at Sweetwater
Did you find this review helpful?yesno

Waves DeEsser
5
This plug-in installed without any problems. I didn't have any compatibility issues. The configuration is all automatic so you just install it and you can start using it after your DAW can recognize it. The manual is very thorough, so if you take the time to read it before starting up this software you should already be an expert except for hearing the effects.

I use this on my Dell computer which has an Intel processor and 2GB of ram. I also run this on windows XP and Cubase for a DAW. It works just fine in this configuration, I had no problems. I use it in the VST format, which is what most PC users will be doing as well. This plug-in actually doesn't use that much CPU power, unlike most other waves plugs. Waves tends to be known for high quality and high CPU usage. It has seemed to be very stable, I don't remember this program ever causing me any crashes or problems.

I have had this for over a year. It really does a great job at de-essing. Nothing can ruin a vocal recording with really harsh overly bright S's and T's. This plugin is like magic on those consonants. It requires relatively little tweaking, and you can start to tamp down on those sounds poking out so much. You do have to be careful though, because you can quickly turn a performance that is overly sibilant into one by someone who sounds like they have a lisp. That is my only real problem with this plug-in, that it can be easy to overdo it. If you use it right though, it can really make a vocal recording sound much better and smoother without a lot of fuss, since it works automatically over the whole track after you give it some guidelines. It is a great value if you do a lot of stuff with vocals that need to be right up front. I would definitely get it again, I use it all the time still.
Buy at Sweetwater
Did you find this review helpful?yesno
Cookies help us improve performance, enhance user experience and deliver our services. By using our services, you agree to our use of cookies. Find out more.