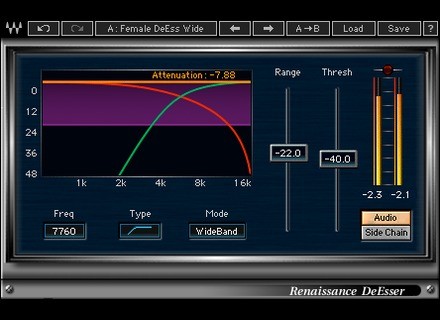 Renaissance DeEsser, Software de-esser from Waves in the Renaissance series.

All user reviews for the Waves Renaissance DeEsser

Average Score:4.5( 4.5/5 based on 2 reviews )
Buy this productView price information >
Not satisfied with those reviews?
Our members also liked:
Buy at Sweetwater

Waves Renaissance DeEsser
4
DeEssers can be life savers in mixes, especially when it's something regarding spoken words. I've used plenty of DeEssers throughout the years, and this has always been one of my main choices. For those who don't know, a DeEsser elimites that shh and ess sound that can occur. They can really make a mic go haywire, and it can totally destroy a mix. I notice this most of all in radio and spoken word lines since most of the vocals I record are death metal vocals. The plugin is laid out very nicely, and anybody can easily use this without having ever read the manual. It contains two slides for range and threshold, a frequency text box, type adjuster, mode and the ability to select between audio or side chain.

This has been my go-to DeEsser for quite awhile. It's easy to use, you can get solid results from it and it doesn't take up too much processing power. I don't use this too often given that I'm a death metal guitarist, but for the spoken word stuff, it has really saved me quite a few times. If you get a chance, I recommend checking it out. It should be able to serve anybody who deals with vocals.

Waves Renaissance DeEsser
5
The process of installing the Waves Ltd. Renaissance Deesser wasn't hard at all as it only took a matter of minutes.  Just follow the basic steps that are usually seen when installing any type of plug-in, as this plug-in is no different.  I didn't have any problems at all relating to compatibility or otherwise and was able to learn how to use the plug-in rather quickly as well.  The make up of the plug-in is easy to follow as it simply has parameters for frequency, type, mode, range, and threshold.  The interface is user friendly as is the case with the entire line of Waves Renaissance plug-ins and I don't think a manual is necessary because of this.

I've never had any problems with the performance of the Waves Ltd. Renaissance Deesser plug-in.  It isn't a plug-in that will take up much processing power at all and for this reason as long as you have a decent system to run it on, I don't think you'll have any problems.  I currently have the plug-in running on a Mac Book Pro that has a 2.2 Ghz Intel Core 2 Duo processor and 4 GB of RAM.  I run the plug-in in Pro Tools LE 7.4 that runs with a Digi 002R audio interface and it runs the plug-in quite well overall.  I've never had any lag or latency of any sort with this plug-in and don't expect that I will in the future.

The Waves Ltd. Renaissance Deesser is overall a great sounding deesser plug-in.  I've used a number of these types of plug-ins in my day and this is up there with the best of them.  I got the plug-in in the Renaissance bundle, so I'm not sure if and how much they charge for the plug-in on its own, but I would say it is worth it either way.  The Renaissance plug-ins are a great collection, so if you are looking for a number of high quality plug-ins at a great price, definitely check out this bundle as you'll be getting this great deesser in addition.