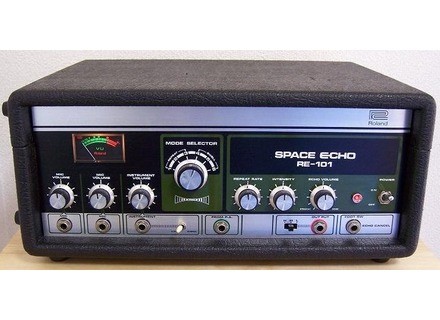 RE-101 Space Echo, Delay / Echo from Roland in the RE series.

Roland RE-101 Space Echo
5
The Roland RE-101 Space Echo is a real tape delay unit. It was released at the same time as the RE-201 and is essentially it's little brother as it's a bit more limited but still shares the same sort of quality. For those new to the Space Echo units, there is a real 1/4" tape coiled up inside this that runs to give you your effects. You make your connections on the front panel via 1/4" jacks for two separate mic inputs, an instrument input, as well as for an output and a footswitch. There's also a distinct connection for taking a direct line in from your PA. It's not rack mountable as it sits in it's own briefcase style case.

It's not too hard to get used to using the Roland RE-101 Space Echo, but there are of course a few things to know about. If you've ever used the RE-201 before, you'll have no issues here as this is essentially a watered down version of that unit. Parameters include knobs for both of the mic input volumes, the instrument input volume, a six way mode selector, repeat rate, intensity, and echo volume control. That's all about you'll need to know, so I don't think you'll have a need for the manual unless you need to open the lid and do some work inside of it, which in fact will be necessary if you own one.

The sound of the Roland RE-101 Space Echo is like no other. It's a super warm and beautiful sounding delay that is perfect for getting that rockabilly slap back delay happening. The RE-201 is definitely more versatile than this, but you can still get a nice amount of varying delay sounds here. I definitely like it most for it's slap back sort of sound, but I'm definitely biased when it comes to this because this is my favorite kind of delay in general. The RE-101 is awesome for longer delays as well!

You simply can't go wrong with the Roland RE-101 Space Echo. It's a cheaper way to get that classic Space Echo sound that has been used on so many different records, most without you even knowing that you're hearing it. The RE-201 Space Echo is definitely the best Space Echo out there, but this is a good runner up, at least as far as the models that I've used are concerned. I'm not sure how much one of these would go for exactly, but I'd only say it's worth it if it's a good bit less than the RE-201. Either way, if you're getting this or you spring for the RE-201, you're getting an amazing Space Echo!
Did you find this review helpful?yesno
»