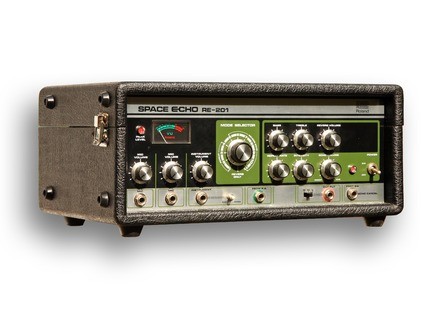 RE-201 Space Echo, Delay / Echo from Roland in the RE series.

Roland RE-201 Space Echo
This analog tape echo is one of the all time great models. Often considered a classic, it's been imitated and reissued but for some reason most of the echos don't come close. This is probably because a lot of imitators do not have an actual reel of tape, which the RE-201 does. The unit has 1/4" inputs and outputs (wet and direct) and it also has a footswitch input. It is not rackable.

The setup of this echo box is pretty simple. There's a knob for each input (level) and six different settings. The settings are basically either a single or repeat delay, but with subtle variations. It also has the standard knobs for speed, intensity, and effect level that come with most delays. It has a manual that is pretty much irrelevant; anyone who is knowledgable enough to be purchasing this should have no problem using it.

While the pedal might not seem incredibly fancy, the quality of the sound is arguably the the best I've ever heard. It's so unique for someone my age who grew up using digital delays; they really don't compare. This has a far more natural sound than most digital delay pedals and plug-in delays. Between the knobs and the six settings, there's a vast amount of options with this pedal. It's versatile enough to use on multiple instruments, which makes it more ideal for recording multiple instruments. I'm used to delays that don't sound particularly good for anything other than guitars.

The sound quality puts almost anything to shame, which is saying a lot since there's literally been hundreds of products that have been made since then.

In my opinion, the best thing about this pedal is the sound quality. It is amazing. The tone control is also stellar. I have played countless delays but this was my first experience with tape delay. I asked around and almost everybody recommended this one, and they did not steer me wrong. I would certainly replace it if I had to and I would certainly recommend it.

jeff 7 adore.'s review (This content has been automatically translated from French)" We do a lot better .."

Roland RE-201 Space Echo
Effects: echo, reverb. Editable? No. Technology Chipset proprotaire at Boss as usual. They have their own they can miniaturize analog circuits, but unlike what I often hear the Boss pedals do sontpas "digital" .This is the emulation of internal memory but miniaturized analog circuits s.Sur one of these there may be an emulation of tape saturation but cpas sur.Connectique Audio jack.

Config simple.Edition sounds with the buttons on the faade.J'ai no manual with the box, I know if there was one, probably yes, finally y'en not really need.

sibanak's review (This content has been automatically translated from French)

Could not be more simple, it's your ears that determines the time cho, his feedback, his EQ etc..

N'achte space is not an echo to the sound quality but because cho is the history of dub, progressive rock!
The trick is to push The argument "intensity" until the machine that loops the signal and play The argument "time", the signal through a pitch espce saturation that will remind you LKJ or Floyds.

I use it for 4 years, I have two. For the sound design is royal, on guitars, keyboards as well.
The argument is particularity the "intensity" Describes above.
Not the least is the stability of delay (effect of pitch, wow) but it's also what makes the charm!
Report qualitprix: We talk about vintage!
The choice I do it again because the two are given them to me!
Otherwise it is for the collector but it's true that a sound!
If you are looking for a clean echo go your way.