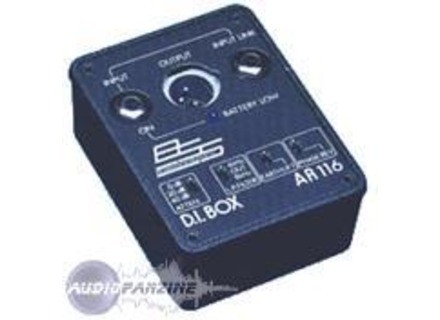 
2 user reviews
Find it in the classifieds starting at $59 Avg used price: $59

BSS Audio AR-116
5
The BSS Audio AR-116 is a direct input box designed for use in both the studio and on the stage, although my use of the unit has only been in the recording studio.  The box is an analog one with 1/4 inch inputs and an XLR output.  The unit AR-116 also has switches for a pad, phase, ground lift, and a low pass filter.  This isn't in a rack mountable form as it is portable box.

Using the BSS Audio AR-116 isn't hard at all as it is a simple DI box.  While you've got a good amount of features on here, it isn't like you have too many things to set.  Once you've got everything plugged in right, you're pretty much good to go, so I don't think that a manual is necessary in any situation for the AR-116.

The sound of the BSS Audio AR-116 is definitely its best feature as it has a clean sound that reproduces the signal that you send to it quite accurately.  I can't say I've got any problems with the way that the AR-116 sounds as it is one of my favorite DI boxes to use.  I've used it for recording bass guitar, synthesizers and other keyboards, and even for getting an electric guitar DI sound.  Each time I've used the box I've been pleased with the end results, which is all that matters in my book...

While the BSS Audio AR-116 is on the more expensive side of DI boxes, if you're looking for DI box that will last a long time and has a top notch sound, the AR-116 is for you.  In the end it is definitely worth the price for me because it is something that I can use over and over again and that I know will give me the clarity that I am looking for in a DI box.  That being said, the price isn't all that more expensive than most DI boxes out there, so it is definitley worth the extra change.  The AR-116 is a great buy for home and professional studio owners alike.

BSS Audio AR-116
5
This is a beast of direct-channel non scne rack (it&#39;s a very small bote!) Active, so running on battery (because it is the passive: that n have not needed electrical energy to operate).

Connections: 1 jack (TS assymtrique certainly - if not, if the TRS symtrique has no sense) of, a XLR output and 1 output jack that transmits the exact copy - so they are not related - the incoming signal (to feed a guitar amp on scne, for example).

Opportunities rglages: Attnuation 0, 20 or 40 dB high pass filter + Off, 4 KHz or 8 KHz + dviation mass to the earth to avoid the "loops" + possibility to reverse the signal phase. No On / Off: turn the bote sitt that a branch of the cable input jack. An LED illuminates when the battery starts be flat.

A box of live is virtually indispensable when using synths on scne because rare are the keyboards that have outputs TRS symtriques and even rarer are those with XLR outputs. Therefore the output of synths symmtriser otherwise the signal is dtriore before reaching the mixing desk (which is at least 50 m from the scne, g nral), causing the blast nettemant audible, especially on a public address (which is more powerful than a simple gnral string Hi-Fi ^ ^). Therefore at least one pair of bote of direct synthesis (see if DSIR use of synth outputs supplmentaires ceului when it has - has come). So imagine if we play with 6 synths and other beasts of scne rhythms, for example, it takes 12! And I promise you that approx. The nine pice 300 CHF (approx. 200 euros), a tax soon! Well, there is the right thing, nothing, impossible to exhaust.

The beasts of direct are required for some because some DJ mixers DJ symmtirises not output but fortunately, this happens less often. Now the most part of DJ mixers XLR output are teams.

It is also essential for guitarists and bass players who directly attack ® religion mix table (to name bote o DI) instead of going out the sound of a guitar amp or lower and repcher the sound of a dynamic microphone (a Shure SM57, for example - that score less than a beast of live!) and it&#39;s dpend what you want. It is clear that the hard-rock guitarist, for example, wanting the distortion will not attack the mixing desk directly prfrera deuxime use the solution but if you want a pure electric guitar sound : DI bote mix directly to table (and apply a copy of the signal from the beast of the direct guitar amp if ncssaire, expr output is normally on prvue a box of live).

MODEL On the other, the fawn to use does not really change, it is symmtriseur months - dssymtriseur (like the Tascam LA-40, for example) o the dstination and its use differ in appearance slightly.

on the other hand, in batteries, the fawn&#39;s BSS AR116 to use is somewhat cavalire. Well, first, there&#39;s no battery door, you must disassemble the Boti, when to change batteries. Then there are two piles: one more use than the other. Discard the battery the most use to bring up the battery and the least use the battery instead of the least use, we must put a new battery. Bizarre, no? I had not observed the RULES, the very first time, for one of them that I had: feedback, damn it, I&#39;ll have to find me a new and as BSS AR116 are no longer (and are used rare), I replace it with an AR-133 (which is even more rare secondhand !)...

Well, there are beasts of direct multi-channel 19-inch rack (4 channel minimum to see some models - and Obviously, they are still active as work with the sector) but the advantage of bo your battery-operated RSID is that they are isolated from the electrical network just as some places, the run is not "clean" and gnre either parasites or snoring : means the batteries can have on the network to isolate electric and therefore not to be affected by pest problem ^_________^

Yes, entandu, the sound is very well reproduced, there is nothing wrong. At this price (about 300 CHF pice so!) Is the least we can expect, right? It amme more EHJV his younger ERRF AR-133. It parat the AR116 are the beasts of the legends live: is it may be that thanks? I have not been many other models in the hands in order to have the drop ncssaire to be able to confirm ^_______^

Although BSS is Chres and I can not dbourser money or find secondhand (especially when one takes a large amount), I repeat BSS, c &#39; is clear. This is the REFERENCE in the Contents! At least for active botes. For the passive, I do not know, I have no exprience ^ ^ And in any fawn, I believe, BSS does not manufacture.