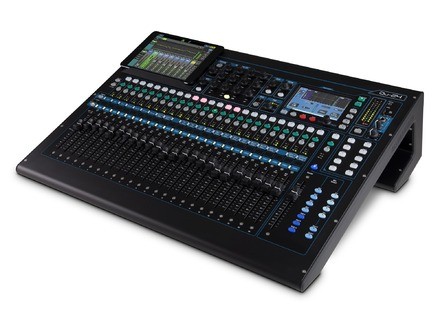 Qu-24, Digital Mixer from Allen & Heath in the Qu series.

SebSound79's review (This content has been automatically translated from French)" Good console but not perfect ..."

First negative point: no choice for the sampling frequency and resolution
it only works in 24bit / 48kHz which is well below the market.
The patch is not very flexible and really negative point that we can not assign the same number of tracks as preamp eg splitter to one vote.
No keys on compressors which frankly is useful on conferences.

Workmanship and robust. Its L-shaped profile makes it very handy and portable for 24 channels.
Digital Breakout compatible with Gld series but unfortunately unable to be used simultaneously on the same box two consoles.

Very simple and effective up to 16 channels on usb qudrive function and 32 of Ordi Mac or PC via the USB connection and his usual sequencer. Ability to route the channels of the sequencer on each track of the console to remix or virtual soundcheck.
Small problem: even with a buffer to 1048 under protools without inserts, protools plant regularly !!?

Overall the audio quality of this console are very good and far superior to a 01V96 that I used for more than 7 years.
The effects work well.

I use it for one month and after trying a lot of console (01V96, LS9, M7CL, CL5, Presonus etc ....)
the value for money is very good. It works very quickly and the sound is there. The same digital multipare it does not increase the number of channels is very convenient.

Too bad the internal config is so locked. Hoping that future updates fix these few missing.

35 of 35 people found this review helpful

Published on 06/22/15
Allen & Heath has released on Google Play the Android version of the Qu-You personal monitor mix app for the Qu series of consoles.