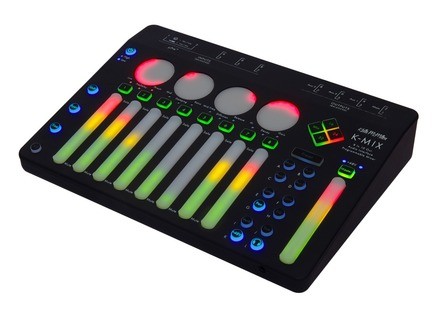 The box is very classy, reminds of Apple products and gives a positive impression of the whole which is only confirmed when using it! You can instantly feel the care that was given to designing this product.


I’m still a bit more reserved as to the cover which I can only hope won’t degrade with time. It looks soft as peach with a very classy matte aspect.
The faders and 4 white wheels look like rubber and are pleasant to touch, hopefully the white won’t fade but only time will tell.

The device is class compliant so no need for a driver, this is one of the reasons why y chose it.

It works right Out of the box (MIDI and 10out/8in audio) with MacOSX Maverick, El Capitan, GNU/Linux, iPad Pro/Mini4/iPhone5S.

It’s very compact but not too small, it can take place on the left or right of a Pa4X 76 or Korg Kronos 73 without risking to fall.

The osund seems to be nice, but I’ll tell more after a more thorough testing and listening.

I’ll complete this review after a few days using it


So here we go, after a few hours using it,

Soundwise: no problem, it’s great. As I’ve worked with an RME UCX, i’d say it stands the test. Compared with my tiny Echo Audio2 USB interface, I’d say that the Audio2 sounds rounder and nicer. I’ve never compared them thoroughly in that regard, but that’s how I feel so far (I felt the same with the RME UCX).

The EQ: it’s a nice surprise, very useable and rather efficient, unlike what Mackie does these days (I have a Reack powered speaker which EQ section is really crap).

Use: I was afraid it would turn out complex to use, but in the end all appears quite logic and the small LEDs indicating the parameters here and there help to find your way, the whole is easy to understand. We’ll see what it gives for live use…
The faders and four wheels are not very finely precise, but that was to be expected – this is exactly why there’s the “Fine” mode for adjusting more precisely. It’s a bit disturbing at first, time will tell how fast (and if) I get used to it.
However, using it with a computer and the K-Mix Editor software which controls the K-Mix allows for more precision using the mouse.

As a whole, it does the job and i consider this small mixer to be really efficient!