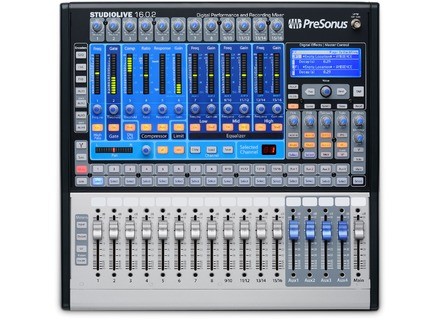 Tralala4's review (This content has been automatically translated from French)" She is dead!"

While she only FIREWIRE this table is worthless

The settings in this table are of extreme simplicity is its greatest asset!
I had to take a look at the manual for one or two functions, the rest is all alone in ten minutes.
Management scenes, effects presets or "Fat Channel" is also amazingly simple.
Same for shipments to, you see everything in a glance. We almost feel of an analog machine, where each function has its associated knob.
I've tested a 01v, the presonus is much higher on this point.

I am frankly disappointed on the other hand on one point: the white between each scene change. A tenth of a second unacceptable!
I am often musician alone without sound engineer. I use a lot my loop pedal to build my instrumentations. I wanted to change the scene during the song depending on the instruments I record while loops running in background ... Well, it's messed with the Presonus, white in music each instrument change! So I am forced to add a second analog table, just two stereo tracks, a "loop out" other "output table / direct micro". It also works, but it's a shame.

The other weak point: MIDI. Yes it is nice to change the scene, changing effects with a MIDI foot pedal, but it's still frankly limited. I had hoped to at least control the mute pedal, especially as the console is easily controllable via Firewire with the bundled software, why not MIDI?

Regarding the sound, I'm pretty satisfied for the digital age.
Preamps are compelling for a small table in this category.
The reverbs are quite nice, it does not seem to me they are worse than on my Lexicon MX400.
Compressors and equalizers fulfill their role properly, although I quickly realized they were not up to my analog compressors and equalizers. At the same time, considering the price of this table, it would have been the height it sounds better!

I chose this table to replace my big rack effects 40kg and my analogue desk.
My back is very satisfied, and the shock of my car!

This is a very good Swiss Army knife, nothing grand, but very suitable for small services with a mid-range sound.
Although I was disappointed by this white between scenes and the weakness of MIDI, I do it again this choice without hesitation.
It is also the lightest and most portable, and it matters!

jedi30000's review (This content has been automatically translated from French)" presonus studio live 16.0.2"

everything has already been said about this digital mixer,
However, I would stress that I see that the only criticism that can be found in this table is the lack of motorized faders.
I am not convinced that this is a defect, but rather a guarantee of reliability and stability over time.
motorized faders quickly lose details with time ...
however I sampling rate is relatively low with 48khz and it is my opinion the only weak point of this wonderful machine.
on all other points this table do wonders and I doubt that we find on the market as value for money.
16 integrated preamp worth more expensive than the table itself ... one wonders how PreSonus have managed this feat.
For users of analogue desk there should be a small adjustment but in two / three days time is set.
Another important thing ... this table is absolutely not a control surface ... useless to try to set the faders to control the midi tracks in your DAW. it will not work.
This table offers a huge opportunity and allows professional quality work without any problems live as homestudio.
with the new version of one of presonus studio, integrating this software to further increased. little is now mainstream settings for each track of the table in each track studio one.
I would do this choice without a doubt and I looked forward to the next prsonus table.
you can buy eyes closed
cordially ...

THAUT's review (This content has been automatically translated from French)

PreSonus StudioLive 16.0.2
A compact digital console like in my chest, combined with a macbook pro for recording (and my microphone ... etc ...) 12 XLR connectors and 2-way stereo RCA / jack.
For more detail, we find the instructions anywhere

Very simple, very well done manual, everything is accessible by a button press (this is what makes the strength of consoles presonus) And the top: After recording, I can rebalance recording from my PC to the console to mixing ... Royal.

No breath, good EQ (including a 31 band for stereo output), in short, nothing to complain about either the top

The sound is faithful to the (I compared with stereo recordings with my MK12 on my VS-100 Roland, no difference and that is the good stuff ...)

I use it for 2 years now, I had the Opps test other consoles school sound engineering, internship in Montreuil and in some theaters and rehearsal rooms. The value for money is simply amazing.
Pros: As simple to use as an analog, but with more features, and digital. The possibility of mixing on the same console at home or studio rebalançant 16 tracks on the console.

The -: Maybe the absence of motorized fader (well me I do not mind), but it explains the price.

If I had a little more money, I will buy a 24.1 for more entries, but for most of training, 12 XLR inputs and 2 stereo line inputs is enough.

Did you find this review helpful?yesno
»
Read the 11 user reviews on the PreSonus StudioLive 16.0.2 »

Published on 10/12/11
PreSonus is now shipping Universal Control 1.5.2, a free update to its driver and control software, which also includes firmware updates for its StudioLive 16.4.2 and 16.0.2 digital mixers.