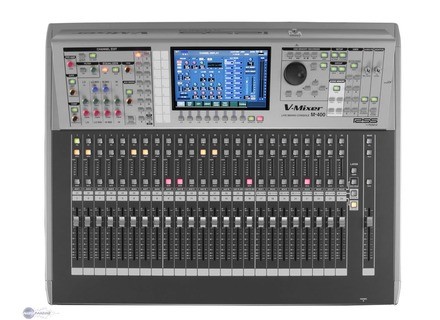 Lsw's review (This content has been automatically translated from French)

Rss By Roland M-400 V-Mixer
1
Attention to the frequency of 48kHz echantillonage.Elle is limitea 24 !!!! and do not expect an advance of this view by the upgrade, this is not the kind of home ....

Roland routing is hellish and full of limitations cf block diagram.
Have you seen the comp access gates and facade? a treshold in all and for all. A joke t it ?? only 4 EQ 31 bands for live dedi console? So 2 for the face and therefore 2 2 Returns circuits .... !!! It is therefore limited to groups with 2 musicians ....

Roland sound is very typs. The EQ is not the effectiveness of monsters. C is rather something soft. You can not remove large defaults but legeremnt refine the sound of origin.

Warning !!! saw what Roland has already made us with the first of his attempt on the subject, the sad vlc7200, it may prove extremely suspicious: the 7200 has never works correctement.Pleine bugs and no tracking software; it is simply pass the V1.00 has 1.01 ..... In time, this machine disintegrates little by petit.Les preamps slamming one after the autres.La serigraphie following the example of preamps and the motorized faders s that can not be recalibrated. Now the M400 looks like two drops of water has its great soeur.On can already notice that the EQ parametric presented as 2 and 2 shelvings
while all the competition is at least 4 parametriques.Que say button access to the comps and gates? only treshold ...... When the customer service, it is not far from Zero Point.
CAUTIOUS so and see instead of the cost YAMAHA.Luc Derhi Inge sound.
Did you find this review helpful?yesno
»

miklav's review (This content has been automatically translated from French)

The console has 48 channels, effects returns are on tracks.
16 assistants, used internally for the effects, or external effects or stage.
16 subgroups and stereo matrix 16.

There are eight preamps in the console, and the others are in the external boxes.

It has an EQ per channel, with the general and master. There was an 2-band semi-parametric and parametric 2, + filter (low cut, high cut, notch ... your choice)

48 V, pad and phase reverse switch and an attenuator for each.
There are 24 compressors and 24 expanders / gates assignable to any slices.

The general Auxs have an EQ like the tracks, an attenuator and a limiter.

The effects section has two parts: one of four graphic EQs can have linked by 2. and some effects to speak of. The graphic EQs can be controlled using the faders and you can choose to change the graphic eq parametric eq by 8 bands. Effects There are four stereo with the basics: reverb, echo / delay, chorus, flanger, pitch ...).
These can be replaced with graphical EQs stereo or dual mono (useful for returns). The effects are assignable to Auxs and entries or insert.

The console is fully automated.

I put 9 because it could have been 4-band EQs for parameter.

The only experience I have in a digital console tascam DM3200

On the M-400, it took me two days to learn everything I need to know.
I have not opened the manual ...

It is very easy to access panel "Channel Edit" (top left on the console) all the functions it takes to process a full path. Shipments are made on an auxiliary faders via a switch called "Sends on Fader": fast and convenient.
The configuration of the patch is clear.
Everything is fast.
At home, it took only 5 minutes for the technician to take control (all assigned to the first) when he had never seen ...

I do not know enough about the converters and the quality of the preamp.
My experience in the console is based primarily on SR 24 and SR40/8/2 Mackies.

In comparison, day and night.
The sound is redefined. + everything is dynamic, clearer, more coherent.
The graphic EQs and EQs channels are very effective, transparent, pure happiness.
Compressors and gates are also very effective.

The effects are very beautiful, I love the reverbs.

In short, I love this console.

The 10 is a reflection of my experience in this area compared to the material that I used before.

I use this console for about two months at the time of writing.

Most: sound, speed of access, ease of use, opportunities, remote box (the big end multicore ...)
the évolutivibilité (it is the word ?)...

Cons: good to quibble: 4-band parametric EQ lack for channels.
I think it may be missing things compared to some consoles (8 effects, graphic EQ on each TO ...) but there's plenty to do a great job with this console.

Which is very well thought out, what are the possibilities of extensions: Recording 40 tracks of Sonar Systems, mixing individual return ...

It is within the range of the Yamaha LS9 (which I do not know and who does not have the remote box ...)
Given the possibilities and sound reproduction, I find the ratio Q / P rather good
She is very pretty with its colors, and its screen (not touch) is clear and pleasant.

What is unfortunate is that it is not enough known in the French market because it is not the case outside.
Everyone wants the Yamaha, and after reading some opinions, some like their preamps !!!!!

Personally, I would do this choice without hesitation.

Go try it a little.

preampdefou's review (This content has been automatically translated from French)" Great sound!"

I had the opportunity to work on the console M-400 while I do not know and I found it very intuitive. What really is the most quality preamps with stage rack that connects RJ45 (CAT5) plug and play mode!
Really not bad at all, pity it does not seem to be very widespread ...
I go to their site www.rolandsystemsgroup.eu, and the first pleasant surprise is that they have a site in French!
Besides, I saw that there are several models of consoles and enclosures. Is there any users on the forum?
A + and its good!

moikl's review (This content has been automatically translated from French)" I love it!"

Rss By Roland M-400 V-Mixer
5
My config: M400 + 2 console casings S1608. Either 40 inputs & 24 outputs with XLR.
For detailed specifications, it is better to refer to the Roland site.
Can I add, I have not regretted that RCA output on the console and there have only XLR inputs on the boxes (given that the inputs are opto-coupled, one could connect directly out of a keyboard input).

I received the console on Saturday morning and evening I had a delivery. Without opening the manual I mixed the 3 bands (config different group, recording of the face) without worry.
Having previously worked on a VM3100 and VM7200 one, I admit that the level of ergonomics is wonderful. At least not worse than her rival in the Yam LS9 '.

The screen is clear and everything is accessible from the control surface on the left.

I enjoyed good converters of the VM-7200, but now we are still well above. I do not know better digital in this price range.

I do not use the internal effects, I have my rack already preprogrammed for the artists that I continue to follow.

I got more than € 10k, but its quality, fun to use it gives me ... I use it as an amateur warned if I may say so. I think, are also facing competition, the price / quality ratio is very correct.

Without hesitation I would do this choice! The hardest part of the story was to convince Madame ...

Other Rss By Roland digital Mixers