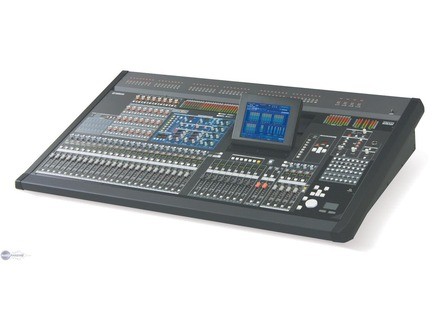 jeromed1's review (This content has been automatically translated from French)

Yamaha PM5D-RH
5
The advice I give here is a notice of novice beginners. I t be amen derrire this console trs trs quickly.

What I can say is that it is normment complte. The notches DIFFERENT can quickly find all the functions of the console. There is possibility to name the tracks numriquement. In select a track on the accde catch this track and it can change its paramtres directly on the screen (by intermdiaire Intgr touchpad or the intermediate diary of knobs.

The converters are of good quality and complements trs transparent. The effects are Intgr trs good.

Trs good console
Did you find this review helpful?yesno
»

Joseph sardin's review (This content has been automatically translated from French)

Yamaha PM5D-RH
5
48 tracks on two pages of 24, 4 stereo inputs, 8 simultaneous effects, 24 "mix," DCA 8 bus, 2 stereo outputs and so on. etc.. but happiness.
That said, I do not like the fact that the conection is only XLR inputs as well as for the exits. Jacks few entries have been perfect (CD player, etc..)
Parametric equalizer, gate, compressor, limiter, etc.. for each input, each output, every bus, every mix, every matrix. 31-band equalizer for each output.
Intépendante gain and phantom power and digital version of RH console. This registers the gain levels and assignments of each entered phantom power for each scene (500 scenes max)

Simple and intuitave. Easy handling in spite of the monster. Boulo few days is included. the manual is clear, well done, but almost innutile TElement is intuitive. it's great.

The converters are great, the effects are beautifully yamaha ...

The screen is not big enough. While connecting to a computer we regret the lack of screen output. that integrated well qu'incinable is not well placed. A very heavy console. we are usually 4 or 6 to set the wheel once in flight. but it is part of happiness. a beautiful console live (never tested in the studio)
Choose to repeat despite its price: 70 k € with a single version of HR Alim.
Did you find this review helpful?yesno
»

phonic6's review (This content has been automatically translated from French)

Yamaha PM5D-RH
5
Regarding the characteristics see a comment below.
For my part I find it very comprehensive and to do all what you want.

If we can know the Titans a Yamaha digital remains in the same spirit while still being simple and intuitive as DM2000. In short, for my part I knew quite well the DM2000 then approach the Yamha PM5D was very quick and easy.
The functions are easily accessible for what I've seen, it is really built for live performance, the différance of DM and O.. Yamaha always!
I have not seen the manual met with the console on the world music scene at the feast of humanity.
Level simple example con is all at the feast of humanity we did not balance a check for only 15 min, the simplicity and intuitive side of the console allowed us to do it very cleanly without no major concerns with all the action!

So I have to say the same bleuffé enough by the result of this console! The signal is clean and is respected, the dynamic is the fact that this brief. One little thing compressors and digital gate of yamaha are not beautiful, but there are still their jobs. The effects are quite nice, but I have not had time to venture more into it, the technicians had stalled receiver 3 reverb and delay, which sounded very well my liver!

Ba I am not using at the moment following the timely material in place on the concerts I work
I like simplicity and the fact that what is really made for live! I like the least I'd know one when I can over, for now I would say the processing stage of dynamic
other model that yes, I had the chance to spend the DM2000 or 02R96 Version 2 in my hands, and a significant number of analog
qualitée price for the report I shall not take
I would do this choice? I liver j'epère tour with a PM5D titin, and is on the technical details of my groups so I hope I find her very soon

Mono and stereo channels offer a motorized fader and encoder also assignable motorized pan, fader, a level of 24 outputs "bus" to be defined in the "Encode Mode" console and has a crown Led and an activation key. Mode "flip" (watch the heads up!) To exchange functionally encoder and slider.
On each track, there are also buttons Pre, which are used when the encoders are assigned to start effects, "Salt", channel selection on the central section (general, various assignments ..), "Chanel On" (activation track) and "Cue" (no comment ..).
Channels also have many mini-LEDs indicate the signal is sent to the Stereo "To St", activation and activity of the compressor and noise gate house, also present a small indicator of the type "bar graph" of level at 6 points around the button "On" indicator replaces the panel Meter physically present on other consoles, that being said, we can of course see all the levels on the integrated display of the PM5D-RH, they are much more accurate. Indicators "Dea" for a possible assignment of a channel has one of the 8 "AAA", "Mute" ditto for the groups of "Mute", "RCL Safe" (the path is not affected by the recall scenes) and Mute Safe. "
Each channel has a small screen "digit" handy showing the values ​​(in dB) and above the fader assignment ..
The four stereo channels are functionally identical to the mono channels, except that their VU meter has two scales LEDs ..
The master track called "Select Channel" takes a very clear provision and adopt numerical indicators clearly visible in green for the equalizer, or red for the treatment of dynamic assignments to "AAA" and group "Mute" , setting the value of delay, the cutoff frequencies of high pass filter, EQ, etc. ..
Some highlights, for more info, visit the manufacturer's site ..

Use of this Yamaha is after all relatively simple, more on the key "User Key" you can create a lot of shortcuts and instant access very quickly to functions normally requiring some additional operations.

It sounds pretty good this console, pre amps are very good and better than the PM5D "base", there is good headroom. The onboard effects are different than sufficient for use in live and can be self Similarly, different parametric EQs per channel or graphics output, are also effective but not exceptional either. Onboard compressors and gates on them are perfectly usable for a board that does not require a "big sound" ..

I have so much work done on this console that I inherently difficult to say anything bad, as said above it sounds good, certainly much better than her sisters DM 2000, M7CL and consort, more it is particularly robust and is obviously designed for touring. It remains stable under all circumstances of use, which is not true of all digital consoles far from it.

Did you find this review helpful?yesno
»
Read the 5 user reviews on the Yamaha PM5D-RH »