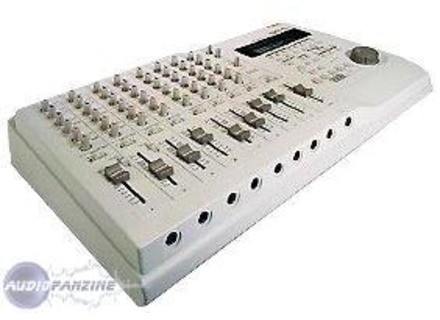 Fostex DMT-8VL
5
I have the manual in .pdf ca interested if someone!

diGo's review (This content has been automatically translated from French)" 15 years later ..."

Getting ready for some fast enough that we know the characteristics of the device.
The manual is not very complicated.
I do not touch the south so I've never explored all the functions associated with it.
Otherwise, we branch, we set the level, [rec + play] it saves it puts the track "trk" stereo output or headphones, [play] and listen ...
I recorded a lot of things for 15 years and it still works well! some buttons are temperamental but hey, my "studio" (at home and at local rehearsal) has never been a non-smoking room ...

From what I was told, this is an old device with the first analog / digital converters and vice versa and to convince people in a spirit of performance, they put that right components in these new appliances ...

So it seems that they are, I've never been able to make comparisons with others and I do not have the ear fine enough to have judgment on it. In any case, it does its business.

Dynamics? bah if the signal input is super low, it will be super low and if it is too strong, it will saturate ... I never understood this argument dynamically when we know that at the end we will do everything to compress the final death and turn the whole dynamic that contains history that "it sounds louder!"

Well it will make 15 years that I use!

I've never tried other models but the way I use has evolved over time and resources.
I use a mixer 12 channel XLR upstream and I came out in the REC OUT RCA and RCA inputs enters the Fostex DMT8 VL. Given that there are only 2 bus, when one is recorded, it is a stereo mix as a whole and should not be up the pole so that it is exploitable to the mix and mastering, so the EQ on the console 12 being provided more channels, they serve me to apply a correction to the input.

How to make an adjustment when you are alone? It records every micro / element on a flat track (without EQ) and then plays the track loop by making out on the edge of the console (line input) or on a separate slice dedicated. One listens and corrects ... In short it is a bit long but what is done upstream will be more to do later. 2 tracks for drums, one for bass, 2 guitars, 3 songs or a last minute guest, like saxophone, short we can put things in instrument mode instrument ...

At the end, I get all the digital tracks directly on my computer with the SPDIF output. But hey, it's a bit long, must be read 2-2 (this is a stereo output) while recording on the computer with editing software, and then separate ... for synchronized properly, I copied the first shot of chopsticks "one two three four" on all tracks.

After I mix everything in Acid Pro but I'm starting to reach the limits of the app then I'll have to put me in the Cubase or Logic ... But hey, it's so easy to use Acid Pro I'm having a little trouble me apart.

Brief return to the Fostex DMT8 VL, there remains a great remote rec / play and a good 8-track recorder but you must have the gear to side to be doing well. It was a great thing seriously at the time of its release and it's still a nice toy for we know how to use it well.

Ps2's review (This content has been automatically translated from French)

18-bit converters, a little old but correct
we can do without it and go by the numrique
no effect
excellent dynamic

I use it for 5 years and I do not regret it.
Did you find this review helpful?yesno
»

Farenheit's review (This content has been automatically translated from French)

I use it for 5 years without any problem: many models made with ... and still be happy with the final result!
a bit expensive when it came out
is now around secondhand 400/450euros: at that price, I think it's a very good price / quality ratio
choice I would do without hesitation ... and I advise those who want to start recording multitrack digital mondre cost and other than on PC!
Did you find this review helpful?yesno
»

Fostex DMT-8VL manuals and other files