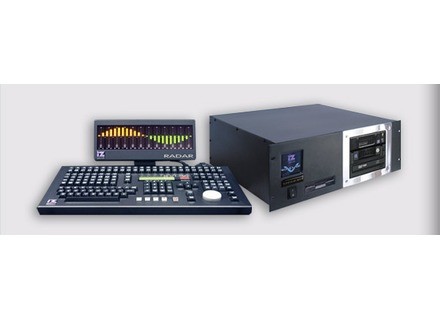 Iz Corp RADAR V
3
I purchased the RADAR V upgrade from a RADAR II parts machine. It has the equivalent of the IZ Corp. Classic Converters, which sample up to 24 bit/ 48 kHz. I also purchased the additional SMPTE/MTC synchronizer card allowing for synchronization to other devices through standard audio and MIDI cables. This RADAR has a 80 gb SCSI hard disk and record on all 24 tracks simultaneously. It records in a proprietary bwav format, but these files can be converted to standard .wav files and be exported through a USB drive, a DVD-/+R through it's DVD recorder, or to an internal IDE hard disk. There is a VGA output for a monitor to view the recording and the waveforms. This RADAR has a session controller which has a meterbridge, but a standard PS/2 keyboard can be used to navigate with some key modifications. When using a PS/2 keyboard, the use of a monitor would be absolutely necessary to view time and record information, but the monitor is not required when using the session controller. Both the session controller and keyboard can be connected and used simultaneously and interchangeably, meaning the keyboard could be used in the control room and the session controller with its meterbridge could be used in the recording room.

There are no built-in effects nor can MIDI tracks be constructed or edited on the machine.

The machine is very intuitive and operates much like a tape machine. The manual is easy to understand. Essentially, connect the RADAR V to a mixing console and you're ready to rock.

The only function that is unlike a tape machine while recording is dropping in tracks. For instance, say 4 tracks are being recorded, and for whatever reason, while recording is progressing, you want to add another 4 tracks. On a tape machine, you would merely arm the new tracks you wish to record on. For whatever reason, even though the tracks will arm, no recordings will be made on those tracks until the machine is stop and re-engaged into record mode. This isn't a major limitation, but you must be aware of it, especially if you're trying to record something on the fly, because you'll lose whatever you're trying to capture until you actually stop and then start recording on the machine.

Punch-ins work just like a tape machine, in that if you are in play mode you merely hit record in order to "punch-in" the recording, and hit play to "punch-out" of it.

Some editing is possible in the way of nudging tracks and cutting and pasting, but other than fades not much else can be done on this type of machine.

This machine will slave to a tape machine with a SMPTE track very well and there are no noticeable artifacts on the recordings when doing this.

I think this is one of the best sounding digital recorders on the market thanks to its excellent converters. That is the best part of this recorder, but like a tape machine, it can't do much more than record without additional equipment.

The best part of this machine is the high quality recordings it captures. I think it is more or less competitively price, but for being a relatively high powered computer system, it is missing some major features such as the ability to use and edit MIDI tracks. There are also a couple of decisions that seem a little odd regarding the hardware. For instance, although the machine has USB ports, in order to connect USB thumb and hard drives to for easy importing and exporting, the ports are located exclusively on the back of the machine. This can be a major pain to access if the RADAR is rackmounted (as it ought to be), and at least two ports should have been provided at the front of the machine. This problem can be somewhat solved with a USB extension cable, but for a machine of this caliber and cost it should not be necessary to have to resort to such measures.