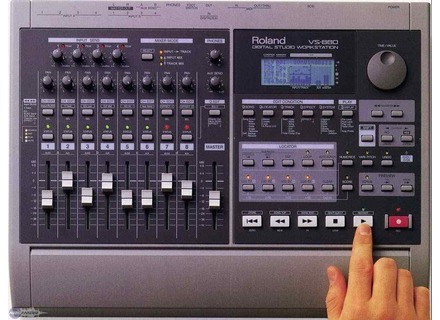 VS-880, Digital Multrack-studio from Roland in the VS series.

very hard to use and understand

Roland VS-880
5
The features are basic but the machine is so user friendly it makes recording a flash.i

I know the VS-880 is a older model but it was a good starting point for Roland..hey Roland!! Remember LED lights.

I bought my VS 880 used and I've never had any problems not even in the 2 years I've had it.

It sound great!! each channel is powerfull and the effects are the....hey!!

Are you serious.I love the hell out of the VS 880 so much I broke up with my girlfriend to have more time time recording. Hey I really love roland quality

shimelo's review (This content has been automatically translated from French)"VS 880, a good concept"

Roland VS-880
5
It is true, we are in late 2012 and it is perhaps surprising that talk of VS 880 today, but I find it a bit unfair that this machine is moved to the door so quickly to the point that nobody wants even ridiculous bargain price proposed. I purchased this unit 16,000 francs (about 2,400 euros) in 1997 and I am much used until 2000. Next time computer rang and he was off into oblivion. However, this machine gave me the image of a good concept designed primarily for musicians. The above not madness: copy / paste everything is possible but not obvious or not quantize audio time stretching .... You just have to play and play well as at the time the magnetos tape. The number of tracks is limited to 8 read and 4 simultaneous recording but an ingenious system of virtual tracks, a kind of sub-tracks make it very convenient for example, several versions of a solo with a subsequent election. Midi embedded system allows it to synchronize very well with other machines in the MTC, a roundtrip SPDIF, two multi effects quality (optional but it is when it was) the ability to record the internal effects on the slopes ... and many other things that make him a very interesting device yet. Roland has done things in my opinion. Converters are correct in their entirety

For what is the use we can not say that it is a gas plant but the question you have to work to enjoy all its subtleties. Functions are available but many users blame him turn very ergonomic. I somewhat agree but given the capabilities of the machine, I do not see how we can do better. Indeed, after a somewhat difficult, I would say, you realize when you start to master the craft that nothing is missing. The manual is well done but the number of pages is a bit steep for beginners

With his current cards like MOTU, RME, Apogee and everything else that reach heights, difficult to talk tranparence converters VS 880 today. Say they bring a certain character to the music pleasant enough close analog, one could even speak of "The Roland" as they say the sound Emu or Akai!
Again you have several options: full-quality 16 bit 44.1 khz or mild compression or high compression for long-term recording. It must not be forgotten that supports hard drives designed for this machine have nothing to do with the 2 Terabytes or more of today&#39;s computers. Only a small IDE drive internal 2.5-inch 4400 rpm / minute or more of external SCSI through the interface provided but it does not go very far: max 4 GB partitions 1GB! However, this restriction has never stopped working and still have all this blessed place in relation to the tapes: I remember that 1 strip 1/2 inch to 38 analog Tascam 38 cm / s was about 500 francs (75 Euros) including VAT for 1/2 hour recording and I do not even talk about the 24 tracks 2 inches to 220 euros for 1/4 hour recording 76 cm / second! ...

So I used the machine for 3 years intensive and not the shadow of a bug or orderly repeating as the ordis.
In 40 years of recording I used almost all the gear available on the planet: De Neve or SSL console with magneto Studer, Ampex, Otari, Sony 4-track cassette 48 tracks in Sony tape all without talking computer can say I have tried many models before you buy! ... The feature I like most about this machine is the ability to save most of his music with maximum safety, all in the volume of a briefcase.
What I like least: 1) If you do not save the session before turning the machine on loses his job! Just look at the very small screen requesting the trick, that&#39;s all ...
2) The display is too small given the number of functions available, especially on the first model where there is not even backlit.
In conclusion, the VS 880 does not deserve systematic forgetting that he is a victim, especially in France. This is a good, reliable machine coupled to a faithful and kind Behringer or Mackie mixer you can have a nice little home studio complete without breaking the bank. For my part I do not sell and will even restart it soon in my new studio Hi-Tech where he will work (even if only for its internal effects) alongside a Protools upscale without blushing because even King Protools should "take a leaf out" in some ways! ...

StolenSpirit's review (This content has been automatically translated from French)

Very good machine.
Easy to use, excellent sound dimension. I use it as DTD, mixer and converter (which I re-injects the sound card via SPDIF)
The COSM modeling (micro) are amazing.
Recommend
I've had 3 months
Did you find this review helpful?yesno
»
Read the 6 user reviews on the Roland VS-880 »