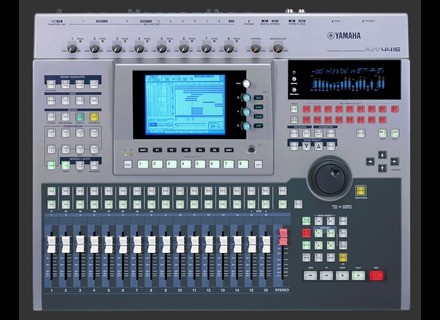 An very flexible and high quality machine. the overall capabilities really do equal that of a complete studio in one reasonably portable package. Sound quaility is excellent and if you're looking for something that will take you from concept to finished product ready to master, this unit will do it.

Make sure you have at least version 2.0 of the OS (a vast improvement over pre-2.0 versions).

Not for beginners. Due to the number of features and capabilities of this unit, it's not something a newbie to recording should start with. It's a pro level machine and Yamaha seems to have made that assumption in it's documentation.

Manuals are weak to just plain wrong in some places. A non-English speaker clearly wrote the English version of the manual.

Due to the complexity of the unit, Yamaha really should offer training of some sort (or develop a network that can provide the training).

The only issue with the hardware itself is the speed of the CD burner, which is painfully slow in it's burning process.

Very well built unit. Heavy and solid in all respects. Metal and plastic well integrated with all controls having a solid and quailty feel to them. Time will tell if it stands up on the road but by all appearences, it should do well.

If you know what you're doing, this is the best deck out there. If your new to recording, get some experience with pro gear first.

Good construction quality, it is solid

Yamaha AW4416
4
For inspiration, I typically like to go places and record or write my songs. For instance, it's always nice in New England to get a cabin in the woods in the fall and check out the foliage as you write some great tunes. To accomplish this, I could no longer use my PC at home for recording. I needed something powerful, yet portable. I paid roughly $3200 for this unit at Musician's Friend.

First off, it's incredibly flexible. There are sampling pads, built in effects, a track display, several levels of undo and more. In addition, it's a digital hard disk based mixer / recorder with a built in SCSI CD burner. The sound quality is incredible.

It was a chore to learn how to use properly. It doesn't take too long to get in and start recording tracks, but there's so much functionality built into this unit it will take you a while to learn how to use it all. Not that this is a bad thing. This tabletop unit is probably as powerful and flexible as a whole analog studio.

The construction of the unit seems relatively solid. It's a combined aluminum and plastic chassis, so it's not going to take a fall off of a table very well, but occasional bumps and bruises probably won't hurt too bad. The quality of the recordings as mentioned earlier is excellent. All of the knobs, switches and buttons are solid as well, nothing cheap about this unit.

It's not cheap, of course. But I think you get what you pay for. The AW4416 is a fine workstation. The included functionality may be more than some expect or are able to get used to, but I think the price point is fair considering everything you can do with this unit.

Yamaha AW4416
4
The Yamaha AW4416 is a digital portable multi-track studio that has eight mic pre amps and the capability to record eight tracks at once, and 16 in total. The sampling rate is standard 44,100 and 16 bit audio, and it is recorded onto an internal hard drive. It has an LED screen that is digital and can control a wealth of options for recording.

The configuration of the Yamaha AW4416 definitely takes getting used to because there are simply so many buttons and options that come along with this recorder. Everything is pretty easily accessible in terms of your basic functions, but it can sometimes be confusing to figure out how to do things when you get under the surface a little more. This being said, I never had too many issues with the Yamaha AW4416 because I never used it for anything too complex. The manual for this is very thorough and is extremely helpful when learning this machine.

The sound quality of the Yamaha AW4416 is about average in terms of the preamps. They aren't bad sounding and are usable, but aren't top notch by any stretch. Beyond this, the effects in this machine sound very good and it is overall a powerful unit with a lot of different effects and signal processing.

I've first used the Yamaha AW4416 multi-track recorder about five years ago and for the time I used it, it worked very well for what I wanted to do with it. This day and age I wouldn't recommend trying to edit audio on this machine, but there are a lot of capabilities that come with the fact that this is fairly easy to bring around. If you are looking to get into recording, I would recommend getting a computer based system, as that is definitely the future of digital audio. This being said, the Yamaha AW4416 is convenient to bring around and will definitely do what it does as advertised.

Did you find this review helpful?yesno
»
Read the 19 user reviews on the Yamaha AW4416 »