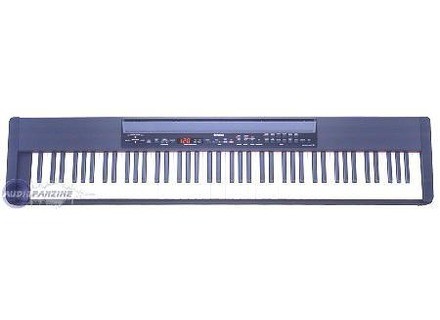 P-90, Digital Piano from Yamaha in the P series.

Yamaha P-90
4
81 key...Midi in and out...Footswitch compatable and pedal compatable too...

There are not many sounds but that's the idea...This is a piano, no a synth...It's built well and feels like the real thing down to the proper weighted keys...

Use is simple...The manual spells it all out just fine...A child could learn to effectively use it in 15 minutes...There are more functions like a 2 track recorder, metronome, effects...But I use it and bought it to use as a piano...

The piano sounds are amazing...Very rich, full, and non-digital sounding...It captures every nuance of your playing and translates it very nicely into what sounds like a well tuned, real piano...The other tones are what you might expect - Strings, Elec Piano, Organs, Wood/Brass, Choir, and, of course, a few exquisite Grand Pianos...Perfect for practice or studio use...Records very well...The producer in me loves it, the player in me appreciates it for the tone/feel/ease of use...

I like it's playability and piano sounds...Those were my two criterion going in...I got that....I really don't use the other functions enough to speak as to how well they function or sound....

The value is so so...By now it's worth crap since it's over 3 years old but I have no intention of selling it anyway...ANd when I say it's not worth much it's only because there are many newer models, that's all...

I tried many and settled here...The best tone and feel for piano...

I'd buy it again....
Did you find this review helpful?yesno
»

Edel's review (This content has been automatically translated from French)

Yamaha P-90
3
88-key Graded Hammer keyboard Yammy. 64 polyphony.
22 MB of ROM, a Grand piano the same as the P120: 3 velicités sampled, 1 sample for the damper and one for the "key off".
The pedal is progressive and included for the determination of damper.

There is a small 2-track recorder super easy to use. The metronome is nice and does not slaps on the nervous system.
2 sliders a good feeling, one for volume and one for brightness.
Comes with a semi transparent panel and AC adapter.

It weighs 17 pounds, its small size makes it very easy to wear.

For a digital piano is quite comprehensive compared with the competition.

Graded Hammer keyboard is the same on all the other Yamaha who: nickel.
A little too "ranking" for my taste, I find the contrast between the bass and treble a bit much especially lorqu'on known manufacturers of acoustic pianos (including Yamaha) seek to balance the reach of their products.
The keyboard is very quiet, not caw to the Technics when you play it: o)

Not need the manual to use everyday. It's very intuitive to use.

He loses if the memory is not on regularly. Nothing serious but ... even my clock radio to a stack R9 to compensate for that.

The Grand Piano 1 is the only reason that can push its purchase. It's very own sample, the transition from one sample to another velocity is very discreet. However it distigue just the passage of a sample to another at the height of the note (no 88 * (3 +1) samples

The variation of the Grand Piano 1 uses the same samples, but its sound is similar to the P80 (darker).

The Grand Piano 2 seems straight out of a P100! Aging is a sound metal. It does not use the same samples as the Grand Piano 1. Its variation is more ball and even less convincing.

I find the strings (stereo) not great, however the vocals are quite good!
The variation of these last two is the same thing but with a softer attack.

Low (wood and elections) are correct.
The organs are Yamaha's vision of how the organ sounds ..
The Clavi is well done, with key-off sample please!

I am no fan of e-pianos, they told me the air in the standard.

Oh, do not expect anything with headphones <400 balls (er.. Bullets francs what). The difference jumps to the ears as it were between a classical and a Sony CDXXX Sennheiser range.

I bought a blind man could not the esseyer. I practiced a lot on the P80 back and thought the same thing brought up to date.

Unfortunately, this seems to have been a little hastily, the mine "plant" FREQUENTLY (more sound comes out, forced to turn off etc. ..) and the keyboard appears (this is very subjective) less solid than his predecessor .
Did you find this review helpful?yesno
»

renonzemoon's review (This content has been automatically translated from French)

Yamaha P-90
4
From the time I promise to write this review ... here we go. I must say that I was waiting to get my U1 Silent to address a little comparison.
<p class="bbcode-offtopic"> Off topic: <span>("wah the ôtreu, it has a Saïlent &#39;" yeah, but I crashed my bike and my insurance did cough up for that ... have to make sacrifices ...)</span>
Well, then just a nice matte black keyboard with 88 keys, very classy in sobriety, and given the mass density of Bouzin, it made me look tough.
Sound side, with 12 categories for each variation, or 24 sounds in the end.
Side effects: 4 reverb types, with a choice of intensity, then four effects (chorus / phaser / tremolo / delay) can not be combined, which is a shame.
The adjustment of the dynamic response to the keyboard (I hate to say the "feel" it is of course fixed): 3 levels plus one that allows a dynamic keyboard not exactly (same speed for each key, some is the force with which we play).
And ending with the console, setting volume, brightness adjustment, Part metronome, two part MIDI sequencer tracks, characters and screen display 3 red digital clock radio genre.
For connectors, located on the left side (which can be as practical as crap, depending on the situation ...), it&#39;s pretty classic: taking power supply / sustain pedal jack / two stereo audio outputs (2 * Jack + 2 * RCA) / MIDI in-out/TO HOST / 2 headphone jacks.
Oh, last thing, my shoulders remind me that the baby weighs 17 Kg, measuring 1m35, and that&#39;s fine.

So first of all, the test that is subject to moultes controversies, debates and other cyber-spats: touch. Sustense ...
Well I must be one of the most difficult puzzle balls never satisfied by this point, I must say it&#39;s not bad at all, I speak for the use piano. Position in medium (normal), pianist, was a good feeling, and the heavy touch can make a little finger. But I said a little. For by returning to the upright piano, I realize that the little touches are comparable, and that the "weight" and technology acquired with the P90 have the same return value on the piano. So in terms of touch, I would say to play it very well, very nice, but to work (the classic example), it is not enough, even though it is obviously better than nothing.
<p class="bbcode-offtopic"> Off topic: <span>By the way, I force myself to work on the Silent, although the report touch / sound is less enjoyable and less realistic. I hope that in three years (the mine), they changed it.</span>
The basic operation is quite simple and intuitive (settings sound / touch, split / dual ...). However, once you want to go into details, you better have a good memory or manual under the eyes: everything goes through a system of functions and display 3-character, so nothing appears in clear only numbers and codes. Besides this aspect, the available functions are also quite practical, both sounds (sound balance adjustment mode dual / split) and MIDI capabilities.
Strange then that is 2004 (2004! Yes sir) is that the P90 can not permanently store the settings: indeed, if the keyboard is unplugged for over a week, you take the risk of finding the reset, what brand new ... (&#39;Tain, we are in 2004 still ...)
My main regret is that there is no configuration backups for a quick and easy recall of settings specific to certain songs or uses: to fill this gap, there are only SysEx messages; So either you have a computer next door who can bring these data and re-inject the right time, or it must move towards archivers such as MIDI or MDF2 MDF3, solutions may be more suited to the stage.
No crash, as I have believed me or read elsewhere on this site: it&#39;s just connected to a MIDI sequencer software for example, it may be that MIDI messages are sent to P90, messages that switch some of its parameters. Typically, the LOCAL_ON: By default, some sequencers are changing the internal parameter to OFF, so hop over his coming out of the keyboard.
Normal but worrying when you do not know. Besides, if we go into the features and MIDI master keyboard is fairly complete, the documentation is well detailed, and there&#39;s way to the floor a few hours on it.

For the piano, I use only the Grand Piano 1 no change, and I find it quite exceptional. Low calm their mother. Realism is good enough.
If I nit-picking, I would say that normal touch, at times, this position is too weak, but the problem is that from Hard in position, the contrast is too great, and the color of its much more ( too?) deaf. Hammer like a mule position Hard, you do not join the range of sounds Medium position, damage ...
For other sounds, Rhodes is more than adequate, the Wurlitzer (if any) bof, vibraphone great, the harpsichord, too. Otherwise, it can help, but I have not bought a synth therefore not expect mega-sounds.

That is the record after four months of living together with the P90: a very good stage piano, very enjoyable to play and hear. Portable in the measurement of physical or vehicular ... Indeed, "only 17Kg" yes, but at arm&#39;s length and shoulder to ride in the subway, I assure you that it uses ... it maintains or, as desired.
Before opting for the P90, I have long prowled, hesitating, in the store to try the P250 which I liked a lot, but it is 15 Kg and another EUR 1000 which were prohibitive.
I understand that Yamaha do not have a P250 without amplification, the size of the P90. Not understand ...
But hey, I&#39;m still happy with my compromise. Yes, yes ...
Did you find this review helpful?yesno
»

IVIarsu's review (This content has been automatically translated from French)

c if a piano numrique the most basic 24 sounds (including variations), three effects, reverbs 3 ...
He was really more in demand pa, its primary purpose as to simulate an acoustic piano.
Too bad it is not ny some control functions, wholesale s no question of use it as a master keyboard.

I had some small bug with the sustain pedal that s hand from time to time (well not Souvant anyway). So the grades as hard as when pressing the pedal so that you touch not and vice versa. We must rekindle dye and for solving the problem, but it can be pretty boring if scne.

The great interest of the p90 that is the great Piano1, trs hot Submitted, I like beacoup.
As against the rest is pretty blah, especially that my rhodes dcus well, he's a fairly typ more suited to a groundwater. It DPAN little, but not transcendent. The organs are average, but like his Dépan, c not bad either. The string is not really top.

But again the Grand Piano 1 is exellent, so at least you have a piano sound that kills (the variation is very good too)

Ds all it is a trs good keyboard, solid, lightweight, top price quality ratio compared to the competition, making it a good investment trs, if you want to play the piano.
Did you find this review helpful?yesno
»
Read the 14 user reviews on the Yamaha P-90 »