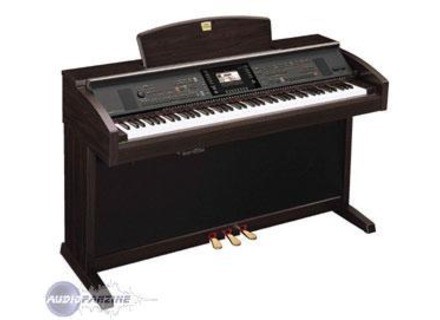 coucou28's review (This content has been automatically translated from French)

I tried a piano in the store queue and the Clavinova. The touch is super practitioner.
The configuration is trs directs PC menus, directories and files. This adds a little use and gives the impression of being at the controls of a gas plant. But it soon to have a lot of buttons everywhere.
I have not (yet) express the MIDI
The manual is clear and trs sr IN FRENCH

One thing I do not like on the other hand is that the piano rebooted every time you turn. Notement the rverb, and harmonies (instrumental and vocal).

Sounds are staggering ism, especially with technology MegaVoice dveloppe by Yamaha. The guitars are littralement life.
As for brass, they are also trsralistes.
For cons, I still do not see the usefulness in the MODEL, as in many others, all sound effects as spciaux hlicoptre or train that goes into even the spaceship that dcolle.
The effects are the most beautiful effect (no pun intended), though like many musicians I suppose, I use a little rverb and that's it.
I love the sound of the sax and harmonica but I think the piano does not have enough momentum.

I use it for one week now and there qucun doubt, we are made for each other
I tried the CVP307, but frankly, he did nothing to justify such a price diffrence.

I personally have not used the synths so the keyboard is trs enjoyable, beautiful color display smaller than the cvp 307 but more than adequate.
On this screen there are menus that call for sound banks styles etc ... indeed many possibilities, in fact there is no more unless the arborecense tyros!
All menus are in French with a lot.
the great advantage of this piano and I am referring to people who have workstations hard or soft,
Here you have on hand all of a sudden one of doight squenceur arrangements of 16 tracks included with the pro cvp about 300 over there on the net I have 500!
sounds to die for the effects optical outputs to burn compos .....

The sounds are of good quality, notament the piano is for the good but I know a trs okay I'll say it is doing everything in the minds of other sounds cvp.Les was near perfection not much choise a "throw" cot synth sounds a little more Sonnora t would be welcome but it is a good digital piano not a "pattern" of the same brand.
rhymique is the powerful, smooth ride for the end sounds trs.
A beautiful sound of qulibre for piano.
A detail amplification'm only 40 watts low and high sparil is true, but my home is in a room of 42 m2 Croy me was enough,,,

I for a week so a "dig" a little more and as far.
recess is the most sound in all, this is not the intruments looking for the REAL concert piano sound but for amateurs everything is on hand is a workstation full-fledged ready to play back any melody ...
Good quality price I negotiated it is true I would have AIM Yamaha, but above 307 "gun" the consumer too much price differential for minor diffrence .. shame!
A remake, the same besides I do not see anything better on the horizon at the competitors!

priesen's review (This content has been automatically translated from French)

Everything is beautiful, the mechanism of the cover is a real treat (those who have Coninc fingers once understand what I mean).

Two small points "negative" (the word is almost too strong) may be:
- The pedal seems to move a bit from left to right. I hope that over time this will not be a problem.
- The cabinet itself is made of plywood. At that price you could almost expect the massif.

Touching the keyboard impeccable. I did 16 years of classical piano and touch is simply superb.
Easy and intuitive, however, requires a few hours to understand the tool but this discovery is absolutely not a chore, however, this instrument is such a pleasure.
For the selection of MIDI channels, there also must spend a little time but I guess it's the same everywhere. The big advantage here is access to a centralized console.
The manual is very well done and in several languages ​​including French.
I look forward to my kit ADSL connection / USB to test on-line learning and downloading patches.

Simply amazing for such an instrument. However, if the pianos and guitars are exceptional, the brass are a little rest.

I use the keyboard for 2 weeks and got back all the way to music with a growing motivation. I look forward every day to find this instrument and it takes almost that I use reserves to be able to play since my children and my wife did not leave.

The possibilities are just fantastic. I would say that I found in this instrument yet full of genuine soul-mail.

Finally, the Clavinova 305 is the ideal instrument to play or replay with pleasure.