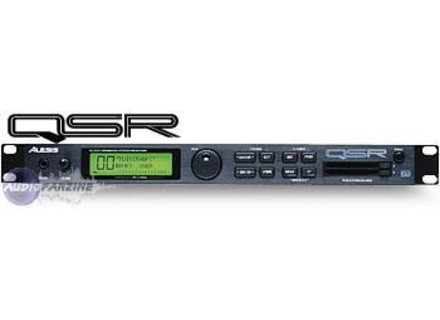 "Gueule de rack"'s review (This content has been automatically translated from French)" TNT in a mini rack ...."

Alesis QSR
4
poly 64 votes
So this is an expander or keyboard or controller
there is a plethora of sounds (with ram or rom cards that I have is still + +)
there is an issue we must get into it but I find well-made rack for a pocket ... the screen is comfortable sufficient number of dedicated buttons and correctly ...
I have the cable to host and publisher dedicated to publishing ... this is a big plus
keys are bright it's convenient and it's beautiful ...

I do not have a manual ... unaccustomed to synths still I find super easy editing and accessible.un treat for me concerne.c is clear!

then this is the price that feasts ... I still set a very evolved and this little rack is not ridiculous, but then not at all
pianos can be found a little metallic said that comparing with other brands they are far from mauvais.beaucoup sounds right for me hands down it is very versatile ... it sounds sort of high class or great originality sometimes ... impressive ...
there any ... guitars and bass leads to hell I love tablecloths other acoustic sounds you paraitrons light ... but overall it's not bad at all with a good dynamic and adat out please! and yes Alesis forces (I have a merger) when the effects are numerous and puissants.il do not abuse any of this may sound a bit confusing.
where the animal is surprised on the controllers:
a clever or surprising aftertouch (as the spirit of fusion)
interesting modulations or even surprising ... we feel that the sounds were hitherto thought ... a point for the design of sounds Alesis is my point of view ...

two years
many models sold ... bought this little rack is amazing for the price I keep ... and if I can find a second ... it's all good

what I like most is the quality and originality of the sounds. For the price of a light gm module or other évolué.ça barely feel the synth worthy of the name it is years ... a vrai.Ne not forget that the listbox is small expander series of keyboards QS ... still ... no less! ...
lightweight and portable 4 separate + adat comfortable screen size ... many Alesis effects and cumulative outputs ...
what I like least is the latency by changing its but the studio is bien.la wheel is annoying it is not accurate or too sensitive, but I do not ... I live it put a great rating for the gear .. small but powerful ...
I found a 2nd I take it off my back I bought another ...
value for money (in the Cygnus) unbeatable take closed eyes + it starts to become scarce ... reliability side, it is considered a bit fragile ... diseases of the beast? audio and headphone outputs mine holds up ... hope it lasts ... he deserves it ... I find it well I like it

I think this must be the PCM.

In addition to the normal analog output, this synth has a digital S-PDIF (16 bit 48 kHz only)

Looks easy to use with illuminated keys that makes it even clearer.

Well, I could not study it in depth yet but I tried it: it sounds piano breathtaking

Nonolepiano's review (This content has been automatically translated from French)

Alesis QSR
5
Rack general, but unfortunately little known to me is largely a Korg TR rack, for example ...
Polyphony 64 alesis effects of very high quality (I think excerpts from Q2)

The manual is in English Grrrrr!
Editing is simple but a bigger screen would have been welcome, but mostly I do not like about this machine and it is worth one point less, it's slow response to changes in his or mode, really annoying to the point of not trying too hard to get into the beast ... (Let alone a beast "back wheel" when it is running) (you turn up to patch 50, for example, is released, and hop back on it 49 ... very annoying ...)

Are enormous and are much less those of expansion cards ... I'm not quite agree with the previous opinion regarding the pianos ... I have a Fantom X6 Reason 8 anda side of QSR and pianos are not tip top anyway ... As against the rhodes are watching closely, they are interesting ... The organs are great with a function that already xonnait on Reason, but the ghosts do not have is a keyclick realistic. Indeed, as the B3 only the first note down to the sound of percussion, and so holds that the other no longer have the same attack.
The strength level sound is still large ground in the minds of film music ect ... grandiose.
He was ahead of its time ...
To say I have a V-Synth, a fantom X6, a pattern 8, a Korg 01W, an S3000, and sometimes I can not make a sound qu'vec this synth, the others are sometimes Street ...
When I see 400 euros in PA ... Pfffff!

I bought it in 2000,
I love it except that damn wheel, I control as possible by twelve o'clock!
value for money is great, I think I could repeat that choice, but I would listen to the Proteus 2000 Emu home that attracts me a lot too.

Seith's review (This content has been automatically translated from French)" Not bad! not bad!"

Sounds are not bad, tablecloths, elec piano well, not terrible classical piano, the drums seem to be the same as the D4 or a little better.
effects are well up to 4 at the same time
expression is good but we feel the limits and the lack of layers
I prefer tablecloths and a few pianos elec

for 2 days
s4 + qs6.2, quadrasynth makes it all the same but if I have other bikes
incomparable with a ground rack (top view) it's a collector but not a must even when I redeemed myself by nostalgia and throne in a rack with other fairs that junk to my heart
you do not be fooled by unscrupulous sellers of this rack is at max 250/300 euros with at least one card or a pcmcia rom blank beyond that is your better choice then bought a QS6 see 8 or 7 which is cheap the sound card will contain 8/16mo so its not far comparatively jv-1080 is superior especially with srjv-rom


4 of 5 people found this review helpful