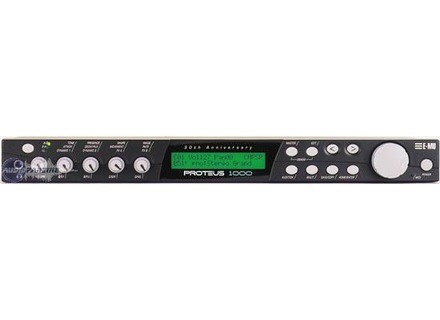 Vinz67's review (This content has been automatically translated from French)

E-MU Proteus 1000
4
Proteus 2000 sound module close to the polyphony except 64 (vs. 128), no separate outputs, MIDI terminals simple (In / Out / Thru) and only one expansion port ROM. 16 multitimbral channels, 2 effects processors on the bus.
512 presets can be edited extensively with filters monstrous.
We can blame the effects mode only "bus" and not "integration" and that their range is relatively small (no Leslie, for example).
Alternatively, a preset = 4 layers. For layer was 2 LFOs, 3 envelopes, a filter (dozens of types), and 24 "patchcords" to connect to any source about what you want (it's really matrix). We can even adjust a thing with another thing, like velocity can vary the speed of LFO 1 will modulate the amplitude of LFO2 will modulate the level of chorus

It is very, very configurable (its knobs can be assigned to MIDI controllers and patchcords) and responds to aftertouch. There Proteum utility to edit sounds (never used).
The filters are very different and effective (up to 12th order), it's really a strength of the machine that can simulate the effects of mouth, phaser and more classics LPF, HPF, etc.

What is bothered on the other hand is that you can not measure the effects for each part. There are four buses, each with its levels of effect, and it sends the parties on a bus. So that you are only four levels possible effects ... weird.

There's also a whole system of Beats & Arpeggiator that does not use. Viewpoint features is excellent!

The general configuration is very simple, hat! I am used to that Roland and Yamaha ... There are no sub-sub-menus, just the menus (menu-button), and after we choose the function you want to edit. In the end I love. It responds very quickly thanks to the overkill Coldfire microcontroller which is based on the machine.
It makes editing easy, especially since we can use the knobs to change the data on the screen! So you press a few buttons, but you turn a lot of knobs, and screen size is well suited. Too much

My Proteus 1000 is equipped with ROM PK-6 (PROM1), but in reality all the ROM and CMPSR PROM1 are identical, only the presets that are different!

The acoustic pianos are rotten, the digital good, the B-3 kill literally pads "chords" are. The drum kits are average, but in a mix they sound more realistic than those of a JV-1080 for example. Winds are not terrible, not the strings, voices y'en not many ... But what is it then? Bass, drum kits and sound effects galore.

Otherwise the sound quality is good. Bass, treble shivering, but not too bright to not sound too digital. In general, it sounds less realistic than a Roland or Yamaha, but for some reason, it sounds pro! It's really the sound that comes out of what we mean everywhere.
But I put a note room because there are a lot of bass and percussion, the rest is not very varied and quite cold without programming nothing came of it.

What I like most is the interface, filters, the amount of samples available and the potential for modulation truly endless.
What I like least, what the effects are too varied and presets not terrible at all. But do not rely on the presets to judge the Proteus 1000! It is a machine to program, and there is terrible! as sophisticated a ROMpler can be.

This is my first synth E-MU, I am amazed, if I had known sooner!
Now for € 250 or less, it's a great deal. It's more original than a JV-1080 for example (but much less versatile) and above is a beast of modulation that makes your game really living with the original sounds if you take the trouble to program a little .
With numerous drum kits, basses and its filters, it is ideal for electronica.
But just for its Rhodes and B3 saturated you can buy it too!