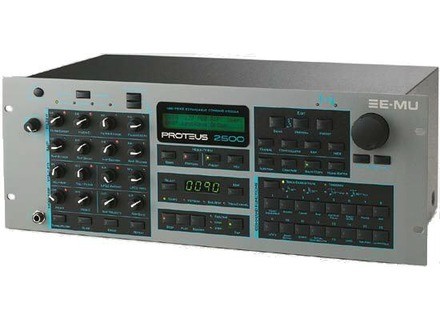 Guez's review (This content has been automatically translated from French)

This module suits me perfectly for my style of music, it would be even better with one of 13 extant cards that can be added (the pure phatt). 3cartes can be added to max.les effects are very interesting, and after have read the manual use of the sequencer is very easy, in fact I use the same + sequencer Cubase

The rhythms are very good, for against the orchestral sounds are not nombreux.Puis with the number of effects in the machine can make all the instruments close to the realism, the sound comes out very well, I use m no monitoring pregnant, just a stereo amp and speakers and the sound comes out perfect.

I have the machine for 1 month I looked seriously at the manual and now I am satisfied with the job I can do with proteus.Avant I used the Roland XV5050 home that was not bad but the sound editing , was too complex it was returned several parameters before accessing the désirer.Dans the prot there are plenty of little shortcuts that allow direct access to parameter désiré.C is very well thought out, because I earn a lot more time.I 've ordered the machine in Germany, and the price or I do it again I had the choice m

Pc68's review (This content has been automatically translated from French)

E-MU Proteus 2500
5
The Technical Specifications are qu&#39;allchantes with a polyphony of 128 voices, its 16 potentiomtres that are used to control any synth / sound module or plug-in (a MIDI tlcommande What = SUPER!), its two lines of buttons (2x8) that can be palpated with a finger, his six outings spares, leaving numrique S / PDIF compatible AES / EBU.
The processor is fast, the changes keep coming no sound problem. I know of bcannes (and even of rputes!) O when did you turn the dial, you patients up until the new preset appears ... L is not the case, a health and breathing is a good sign.
We can then, by being a little sweat on the programming of the OS, offering a rich array of modulation wish, and we love surprising then make expriences on filters, ADSR, etc ... Of course, there&#39;s not Fun Kurweil&#39;s home, but it&#39;s even good for s&#39;clater ... and to create.
Well, the effect processor, it is late. It is known in E-mu (discussed)
The USB connection is largely under-exploited (we will return)
Second, the possibility to put 3 strips of sounds and more, it&#39;s great! Finally a machine that I can take him on vacation, without my having to sacrifice too much space in the trunk! Plus: I bought the machine to US, and with its power-adaptive, no problem to switch 110V/60Hz Ricans in 220/50Hz of the Frenchies.
In disassemble the machine to accommodate the optional ROM, I could immediately find a great void in the fund and housing on the motherboard for an extension? But I do not see the back of dcoupe of BCAN when mirage ...

Ergonomics trs t think well and is seen in the ralisations! Yes, usability is good, whether in the edition of his, in the use of squenceur (which is saved when the machine color = Yeahhhh!).
No shadow, edition of the drumkit, which remains a mirage in EMU! Bouhhhhh! and a small weakness in the edition o values ​​are often figures that are a scale of 0 127, or% (no ms, dB, etc.)
For cons, the use of USB as it borders on Corrections does not upgrade the OS - Yes, it is also the MIDI cables, the IN and OUT (the Ying and Yang) ... It is believed RVer, a straw!
But the machine is trs, trs comfortable, without stalling the manual on his knees. It was quickly seized the philosophy of the machine and the buttons fall under your fingers.
The manual is quite well done, especially for newcomers to the synthse, but a bit too simplistic. It lacks some consistency. I have an English manual since the BCAN just across the Atlantic. I do not know if in France, the manual was translated t and with what quality

The sounds are well made, good quality trs many, but not so diverse.
To go to the dtail, sounds like "Dance" (Bass, Drums, Perc, FX, Pads & Lead) trs go super well, orchestral sounds are good dcevant depending on the game performed. Example: For the guitars, not to let her lie, but it&#39;s good for trs arpges quickly, and Brass are fleeing; symphonic sounds are to be avoided or else take prcaution , the violins will noys well as a mix, but not to foreground otherwise to suggest that you put expr synthetic violins (Hihihihi ultimately can be a fun !).
Of course, many people agree that the sounds sounded cold numrique. But, I think that sounds good to me! You know, some BCAN sound, and that is what is asked! Take the TC Electronics, they are rputs pourleur quality sound yet? Yes, the Prot2500 a grain, and for what it is supposed to do, it&#39;s all good!
The effects are become weak point of the whole plant E-MU (excluding appliances RFX32 dot on the map, but the original, there is the Platinum sampler which is a dot as the concurrency made standard progress. So for the effects, 2 / / SERIES or 24-bit edition with an average. But for most sounds, that&#39;s enough. And was not used much opportunity to have when using the effects provided as is. I even get me to say that the sounds are trs well because they are not masked by a lot of effects in ... Hey, a rhyme with Roland? I&#39;ll still make me friends, me!
Note that I added the cards Protozoa and X-Lead. The sounds of Protozoa intgre THE FIRST SERIES of EMU Proteus, which allows me to have a variety of sounds gnraliste greater, and a decent quality. Deuxime the map is correct, with an orientation techno / dance. In the end, with all these sounds, EMU can be criticized for having made "almost" clones: low and rebasses, drums and percussions galore with Difference often macroscopic, Lead & Pad Fx Will of all kinds ... Oh yes, there is a new state ROM coming Specializes in Drums and Percussion (or else a kind Bass & Drums Roland?)
In short, it adds ROM, but despite their diversity we have a lot of repetition (bass, drum, etc.), especially when you consider the price of the strip (as in 350 gnral !!!). But I must admit, the quality is the!

Well, let&#39;s be clear the! I have a Kurzweil K2500 with KDFX, a pattern. I am demanding of the quality of sound, and since I reason, I am looking at the ergonomics of the machines (the Kurzweil, it&#39;s TOP, the MOTIF is the cata!). With Proteus, the quality is the sound (I prcise I have not bought for orchestral sounds!) Even if a sound numrique (we sniff a cold which is better gr on machines such as Nordlead or Q or Virus ... but CHRE +!) and it is ergonomic, it was not afraid to tamper with and edit sounds. It is a shame that most of the ROM rptent level sounds, we must choose not to end up confused by the 350 kinds of bass (which look alike!), The 350 kinds of drums (that look!), etc ...
Buy PROTEUS 2500 1600 when it was released, c&#39;tait flight manifest ... But paying $ 1100 Proteus 2500 with Protozoa ROM and the X-Lead ROM as I have done, or pay ~ 950 for the P2500 only in France, is a decent rate and challenging in light of the possibility to machine, filters that make the plane Z + for bass, pads and leads, orders direct faade, ergonomics, the possibilities.

sunjy's review (This content has been automatically translated from French)

E-MU Proteus 2500
5
A very complete expander (1210 sounds), with a facade editable at will, I since its release in 2002 and have never had any problems, the bass is huge and when you enter the editing parameters The P2500 is a raging machine.

For its use, it remains very simple, just spend a little time and it's starting from a few to add 3 + 2 other sounds near record in the rom, this little world controlled by the 16 pots, one would almost lose, it's a machine that has no end.
With this we add the 50 filters + 2 + lfo a chorus, effects ...

This machine has a sufficiently oriented arpegiator tek program registered for, but it is very easy to create.

Finally, the price of the argus and in view of its potential is a machine to do all ...

The manual is a bit complex, it must return the machine but it is a matter of time, for my part I had a little trouble at first for editing but I used sounds pre- I programmed and distorting them with pots of the facade.

Tekno sounds are directed to do but for me the drum'n'bass they suit me very well as each being a little added to another and we just grind the sauce.

With experience, it is a machine that I keep because it is fonstionnelle is no time out is not it sounds fabulous.

jptoo2's review (This content has been automatically translated from French)

E-MU Proteus 2500
4
characteristics have already been listed below

The manual I had in French is common and mp7 xl7. We must say what it is, even in French, there is a disaster. Managing the effects well, I've never used the USB port, to fetch the arpeggios, I send my notes on a channel, and I recovered on another. that's two or MIDI cables. That said, it's a great machine, you just understand the principle of menus and submenus. The programming is very simple paterns. SAVING the sounds as well (against it by taking the place of the original sound, which he does they do not correspond to cubase patch names). The real time control change are super convenient and fend messages noon. The possibility of the machine is huge and polyphony than enough. the sequencer "groove" serious ..

If you want realistic sounds, try the rack next to the ground, it is not his cup of tea ... The basics are very good, the violins Ainis synths. In fact everything is really high quality, except the guitars that are really in Ch ..
Thanks to the different numbers potions, the editing possibilities are truly enormous. The punch of the machine and its response to the velocity is a treat. Personally, I do not sound "typed" 80 or 90, they are still news, for those who love the synth sounds and do not sound like a toy.

I find this really excellent machine but you have to take the "head" at the beginning to understand the logic and the user manual explains it flies over the intricacies of the machine. In view of the coast OCCAZ, this remains a affairemais do not ask the realistic sounds. I referrer this purchase but not without instructions in French, lol.

E-MU Proteus 2500 manuals and other files