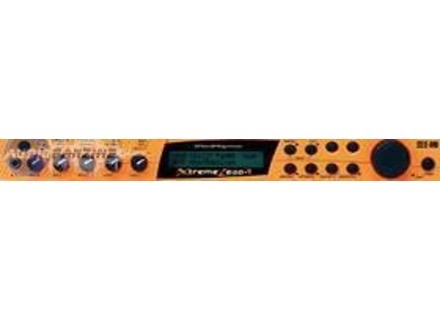 E-MU Xtreme Lead
4
Purchased for US$400 2nd hand off EBay. I bought it cause I wanted a compact powerful synth for dance music.

Pretty much everything, but especially
1. Emu has stuck to a similar interface for all their Proteus 2000 line models, and for good reason. It's fantastically easy to use. 12 realtime control paramaters available from the front panel, super easy editing, almost manual free. As I got mine secong hand, it didnt have a manual, but I got straight into the multilayer (4 per patch) editing, effects, the lot.
2. At first I thought i wouldnt like the small 2 line display, but Emu write the best Synth OS hands down, and nothing much more is needed on screen.
3. The sounds are almost all exceptional (see below), infact there isnt one that I couldnt use. The Arps especially are ludicrously usable, and the beats function makes song creation totally simple. Phatt comes to mind, its really phatt. It far outperforms PC synths. Now I want the Pure Phatt expansion card.
4. Convenient. Dont hide this synth away, you will want to have it right there so you can make tweaks that are just too hard on other synths. Its small (1 U), I have it under my monitor (yes I use a PC sequencer).
5. Value for money. No-one seems to some close to Emu for this. I like it so much I might buy another one (turbo this time)

Nothing much I dont really like but ...
1. Not all the patches have the realtime controls setup for the same paramaters. Although there arent many like this, the odd one makes you wonder why...
2. Most of the sounds are great, but I found with some that back to back notes (ie continuous quarter notes) that there was an audible digital click, Ouch! This was solved by backing off the note length by 120th of a note, but its a bit of a pain.
3. Occasionally some curious timing is using multiple arpegiators.
4. Outputs. It only has 2, I think every multi channel synth these days needs at least 4 outs, and probably digital. The turbo model has it, and with that gets effects inserts (awesome).
5. I like the effects, they are good quality, but I'd like more. Dance is demanding on effects, especially delays. If there were insert-style effects per patch it would be perfect.


The jog wheel was wobbly when I got it. But I think that was from the delivery. The plastic front panel could be better quality, just milled Aluminum. Otherwise is feels like a totally professional peice of kit, however it would need to be protected well is taking it out of the studio.

Love it. Get one. But get the Turbo model, I wish I had cause its even better. Maybe i'll get one as well.

E-MU Xtreme Lead
3
It is an expander, no keyboard.
The edition of the facade is virtually impossible.

The sounds are very very typical! Was available all the sounds of the late 90s. The weak point of the series is Proteus2000 the effect section.
It has four settings available for all departures mix and two sections of effects (reverb / chorus) ... a bit outdated compared to what we're doing today!

Good sound box to find the classic 90s ... even if it is sometimes caricatured.

E-MU Xtreme Lead
5
The Xtreme Lead is a "small" sound module orients Electro, Dance, Techno. But it nevertheless has a wide range of sounds, which extends along the style of music tastes.
For the characteristics (in this classic series):

Rack-1U (normally the "ears" Rack are provided, but not always)
-4 Controller assignable Facade. (There's a small switch that allows you to change "groups" so that no one can have on the facade controller 12, by interchanging)
A-Jack Audio Output (L and R)
-MIDI In / Out / Thru
-Power: Cable classic PC genre
-D origin with the card Xtreme Lead: 4 * 128 Sound Presets, and as many as User. All sounds are editable, different effects rested ... I have unfortunately not yet able to immerse myself fully into the subject ...
-No special editor I know of Ordi ... it must be on a soft rabbatre General Genres MusicQuest or SoundDiver ...
64-channels polyphony
A single-slot card of sounds (original Xtreme Lead)
-Arpeggiator
SuperBeat-Mode
Note: there is an extension Turbo, which increased the polyphony 128, 6 Audio Outputs, Midi sockets 5, 3 maps available, digital output ... See XL-1 Turbo

The configuration is standard, there are 16 channels MID, and chose the sound you want each channel pr. The edition of the sounds can be quick with the Controllers in the facade, or much pousss with different menus. For the cons must be satisfied with the LCD.
It receives MIDI messages perfectly, and shipments also without problem.
The manual is trsdtaill but I have me in English so I put little small. We do not need to read the manual to start hacking in and out of cool stuff, for ds against one wants to do serious, start a little browse.
Trs intuitive use.

Sounds ... it always comes back

Of course it depends on the style of each. I'm not trs Techno, yet I find sounds great! In fact I bought the XL-1 for "electronification" my compositions, and it works Thunder! The drum kits are impeccable, and the sounds are not aggressive in general (although you can make aggressive). So it fits in my nickel compounds Electro, Funk Fusion ...

I am not going into detail of the edition of the sounds, but I'm on there way to customize the machine very easy to taste. (Well if it is to play the Ravel Bolro it will be hard even qd

I did not long ago, but I put that opinion, this "first draft" to guide prospective buyers, because I y'avait not believe qdje bought it and it was bad!

The pros: The sound, controllers, the simplicity of use ...
The -: Too bad no n'yait specialis soft single slot card is a shame too.

This rack is ideal for digital me my modest setup, I did not need USB, Audio outputs or 6 ... I had the 330 and I think I made a good deal. on the other hand, before you buy too much, check prices Turbo version, I find a little "osquot; to both the same price ...

For a first expander I'm really happy with my choice: D
If you want to listen to the sounds, you can listen to those of the XL-7, it sounds the same, except that the XL-7 has a sequencer and more buttons.

Listen to the 21 audio files about E-MU Xtreme Lead »