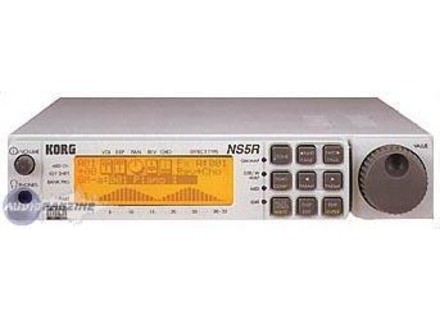 Emeraldbird1's review (This content has been automatically translated from French)

Korg NS5R
4
-Has several banks of sounds for a total of over 1000 sounds (sometimes redundant by the way). The sounds are well squence for GM, but are gnral means.
Two effects-blocks Fully controllable via MIDI and can be arranged several fawns (1 parallle, parallle2 serial)
Fully-editable sounds and effects using the Korg AI2 synthse
-MIDI IN / OUT / THRU, TO HOST, outputs standard analog stereo RCA between IN + (IDAL to connect directly to another expander)
-There are publishers ddi PC freeware (NS5R EDITOR) that can load and save programs and combis

Strengths edit sounds
Weaknesses quality sounds (piano too late my taste, low impact .... but without some original sounds), but the price is okay but in the CATEGORY I prfre the Rolands JV 1080 or 2080

-A little complicated to beginners, but especially in APRS trs flexible MIDI
-For the regulars of the KORG synthse AI2 is easy
The manual is correct, although translated into French
-The little extra is the charter of MIDI implementation Describes all that can make the machine via sysex (for me it is the top because it helps even tweak the functions innacessibles)

Sounds are made for GM squence. I find that it lacks a little "'personalitquot, but the NS5R made me a standard service for 5 years and I still use it. For a little touching up against in the piano (I like the old piano of M1 found in the NS5R ...), you can get something better

Ngatif a point on the LCD screen, the lighting is trs Systm fragile (mine is suddenly turned red before s'teindre compltement). This does not affect the functionality but s'avre more difficult to read what is going on the screen without a lamp. many users have this PB. KORG did not provide the above.

I use it for 5 years without Pb except retro-eclairege of the screen.
I: FLEXIBILITY compatibility XG / GS / GM
I do not like: piano, back-lighting

If this silent again (5 years ago ... well sr) I would do the purchase. Against it by now if we want to sound more "real", we must turn to more Chres modules like the Roland XV or better Kurzweil PC2R I which I LOVE

benrider's review (This content has been automatically translated from French)

Moz@rt's review (This content has been automatically translated from French)

Korg NS5R
5
Hi all, I use the NS5r dj for over a year and I agree dj perfectly. Very compact and really trs heavy, it is ideal for dplacement. Genre repeat with several groups and els instead of repeating there is already a keyboard at my disposal so I do not need to take mine, I just had to take a MIDI connector and cable for power supply and the Expender is ready to operate. I have so far not used its possibilities with a PC, having been OCCASION I had no software or cable allowing me to a. I cre my sounds, edit, and finally I do everything via direectement Expendables. One of his practice is his cot input (dual RCA) very handy if you want to connect another keyboard and want to limit the number of cable connected to the mixing desk.

With regard to its use even when it is more convenient in the studio or live. Indeed his wheels for a willow is the one passes from one sound to another can not make jumps between sounds, I chose to put my sounds have a cot for the other together via the 32 channels available to and after Next and Solo, I know that it was far from the meileur method to use but for which I live This was to find more convenient. For studio recording is the small t is adapted BMOL be only sounds are not class! of a sound at the other one goes from a lead sound sound strings, get out there r no secret j'ia ComenC listen by all sound and there! j'ia and not on paper sounds that I liked by CATEGORY but as a measure of one remembers coordinate sounds anyway. Finally it was not very practical for this cot l.

For me his strong point! I am Precipitation Occurred buy my old keyboard with cann one week before a concert I had to find me something, I fell on the second hand and I was blindly buy anything, everything that Q'uo I knew was there were piano, strings and lead (the March 3's I use most). While I was testing I could not believe it! Pianos and lead sounds are still not clean and beautiful but are STRINGS are PURE WONDER, really, AISIN kits that batteries are really very ralistent! and sounds completely unique, at least I do know the issue qulifi but really it sounds totally sduit me! I really impresion to have a symphony orchestra at my fingertips and a Roland TD-20 sound with my batteries.

The purchase is still a very good investment for me, I recorded my album from him entirely (Drums, Piano, Strings, Lead, Flute and TElement more) relative to its selling price is the killing, finally I am really very personal content.

Korg NS5R
3
Small half rack unit wide screen though bright, full sound, MIDI, RCA soties really open cot, it is very practical.
The half unit is really a good thing for me, I can put my other half-rack sound modules. In the end I rve possder of a set of expander scne to play on, while a half rack.

In the end I find that the use is not as easy as a particular cause, or wheel plutt code. Indeed, if one seeks his numro 67 and that one is about 8, we must turn and turn and turn the wheel to reach the 67! It would be more practical to type the numro. Then if we try to give a bit more reverb or delay by playing well and it is not practical, it is even practically infeasible.

Deu. I deu. There followed one of his fabulous 20 sounds rotten. I mean, rotten sound bizarre can be found in any mix.
So yes I think we should get out something correct this expander, compiling its sounds by seeking one who likes the original but there are too many sounds for me unusable. The organs are not too bad but all look like (how to say is the same sensation), the piano is made usable, the bass is as usual in korg large enough, the sheets are ... I've seen better in medium korg, given the number of short sounds dpart there in the end just sounds workable, it is me deu.

My opinion can not be positive because I t deu by this unit.
Some good sounds-trs
Too-sound unusable
Ergonomically-acceptable in the studio but not on scne

In the end I think it's a good little camera for home gnraliste cot of his PC, but when you start wanting to put their hands, it is not practical.

Did you find this review helpful?yesno
»
Read the 7 user reviews on the Korg NS5R »