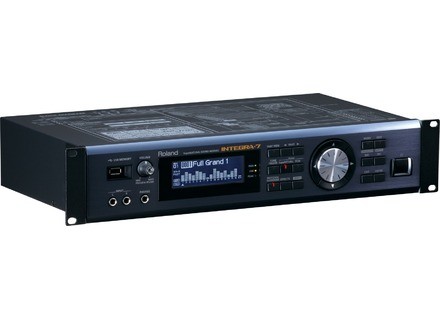 View all offers for Roland Integra-7 »

Roland Integra-7
2
I paid about $1500 for this box, trusting Roland to design a good product. Yes, it has a great number of sounds. There are several serious flaws. While using a MIDI setup from my controller,the sounds that are loaded often just drop out- I must reload the studio set to continue once I search and find this cause. Also the sounds get stuck when changing programs from my controller, requiring a reboot. I'll never trust this Integra for live performance, can't allow a sudden stuck tone. Also I want to export some sounds to my FA workstation- the FA also has thousands of sounds, but not the simple jazz guitar I wanted- but that's another topic. I execute the instructions regarding exporting a sound (or studio set) from Integra to a thumb drive- but cannot succeed. The available help on Roland websites is minimal, very limited, a few random topics. Searching the web has led to this website but I need tech advice. It isn't apparent on the Roland website. I would caution against buying this Integra 7. A well loaded workstation may be preferable.

Roland Integra-7
1
Supernatural sound quality is perfect, i like it a lot!

I got it with the expectation to have some 2 or 3 instruments playing along with me when playing piano.
The sound get chopped up in small pcs and swallowed, because polyphony is too small, when having more than 1 part selected from all 16.
Only 1 supernatural instrument can be used at the time, when I asked for support on Roland USA website, they just closed the question without even answering,
i hope there will be some update or improvement in the future

polyphony is so small, is there any upgrade chip?

I do not understand we have dualcore - quadcore - octacore Full HD, but a polyphony of only 128 ??? That is a true shame!

if you decide to buy it, it is good for the studio, and the sounds are nice.
if you plan to use it live it will be very frustrating to you

But there is no better soundmodule out there for now!
i hope roland will learn from there mistake

friendly regards to all fellow musicians

kikiclavier's review (This content has been automatically translated from French)" Not bad. This is Roland."

Rating: 8
Quite simple.
The manual was in English. Yet I bought the local music store in France.
I had to download it in French on the website of Roland.
The motion is blah surround use even though it may seem interesting. You must have the system sound reproduction suitable, otherwise it is useless. In a group, we play in stereo, not suitable for intégra7 system.

Rating: 8
I'm not fundamentally fan of his Roland grain.
Realistic sounds on presets "supernatural", but nothing transcendent. These are sounds like others offer. Yamaha and Kurzweil make less noise for more realistic sounds.
There are no new sounds as each new instrument. It's already chewed and digested, even if the choice is there.

1 year.
I tried several keyboards, but I needed an expander for reasons of space in the home studio, the car and the scene ... The idea of ​​a Motif Rack XS as internet don ' appeal to him, even in the German market leaders. I needed an expander extremely quickly because of the time to configure and close dates of benefits. So I took it in stock.
What I like most:
- More sounds, more than 6,000
- 2 IN input jack 6.35 for an additional instrument
- Usb connection
- All expansion cards Roland
What I like least:
- The grain of his Roland
- Too many sounds that are similar (eg tablecloths, number 1 ....... xx)
- Seem to have made new with the old: in the end, little sounds "supernatural" and jam the entire library of sounds.
- Usb connector incomplete in its functionality: is worse than RD piano can not usb, play midi files. Not integration. Damage.
- Limitation to be able to use 4 cards simultaneously. We must choose among these 4 cards then its set a sound can interest us, but on the fifth card. Damage.
- Really absurd: no editor for PC. Only Mac, I was not able to use, and iPad. This product has a taste frankly not finished and contemptuous for PC users. It is true, there is a free editor for PC. But not provided by Roland.

After 1 year of use, I much prefer him rack motif xs same price.
Besides, I always use it in conjunction with my rack unit (the first model).

23 of 29 people found this review helpful

G.jourdain's review (This content has been automatically translated from French)" good but not finished"

Roland Integra-7
4
I bought this rack because it was 20 years roland in a box.
full of sounds, effects, RAS ...
perfect connection; usb, midi, SPDIF and analog.
the problem starts with the soft editing.

the configue is easy if you want to play sounds.
manual is average ... reasoning nipon! not mine
and back again the question angry!
editing is on ipad. I ... but not stable.

I've had two months;
I know to be ready all that exists to this day.
have, it is useful sustainably.
it was not the "finesse and power of my korg kronos x, but it has the palette allows to have fun without taking cabbage.

pure Finally, the big downside is the edition;
not stable; MIDI leaving us without knowing why the ipad!!
iPad cheche that connection!
not finish this app.
damage.
but I keep it because ... 20 years ... roland

13 of 16 people found this review helpful

Did you find this review helpful?yesno
»
Read the 12 user reviews on the Roland Integra-7 »

The Roland Integra-7 in v2 for Windows

Published on 06/30/14
The long-awaited Windows version of the Integra-7 Editor plug-in is now available, and directly in v2.

View all 20 videos of Roland Integra-7 »

Roland Integra-7 manuals and other files