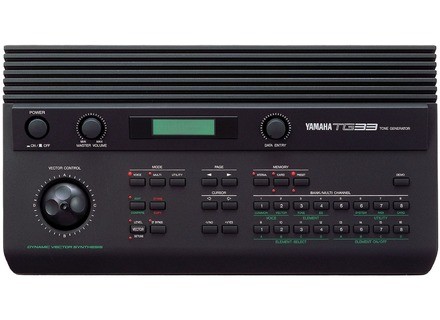 Yamaha TG33
4
The TG 33 is atypical and non-rackable. The sounds are of the purest 12-bit, feeling a bit tired old thing ... The small joystick makes you want to play with the bte, and that we understand why the TG 33 is unusual: the Manir synthse a kind of matrix, the joystick to switch in real time a sample of one another - your exact Surprisingly, the sounds are despotically, a little dirty, but trs, trs cool. Of course, the TG 33 and 32 note polyphony and is multi-timbral MIDI.

The effects are zero, really. The edition of the sounds is not a frightening precision, but for which Tolra some random edit the sounds of the TG 33 is not that complicated you just need to be mind trs particular machine.

The sounds are atypical, as dj said they droulent in time and form a squence on their own. The sounds are combinations of 12 bits AWM and a driver for the FM 4 oprateurs. Unclassifiable ...

Despotically small bte I AIM at the time ... If you sell one for cheap, try the exprience and be surprised ...

I have not finished the study but it is true that the changes can joystic amazing wave. We find little or racks of keyboards with such joystic.

The sounds are a little copper.

What attracted me to this unit is the morphing sound that you can do with this joystic. Too bad we can not do the same thing with samplers! ^ ^

bubblebe's review (This content has been automatically translated from French)

Yamaha TG33
5
32 polyphony, which is not bad for its age.
classical connection, which does not limit the musician lambda.
(FYI, green backlit display, which will not be qd seen in the photo on AudioFanzine

Using very '80s-early '90s: the world of buttons. In short, it is not the knobs, but hey, you have to play the game

The joistique qd is very nice to him even though I must confess, I will not hit often (though there was the one real potential)

(which is for the rest of the bomb)), and well apart from the D550, no such module made me hair stand apart from this small TG33. I find the sound Enormous while I was wary as the plague sounds yam. It sounds warm and powerful. (Well, compared to the module that I had until now). In short, I found it for 75 euros, and is really happy. If the pianos are typically cold yam, the rest is really a pure delight.

For that price, I gladly repeat 3. A real pleasant surprise. I do not understand how he is so under-side. In short, to not hesitate to stand out sounds usual

Yamaha TG33 manuals and other files