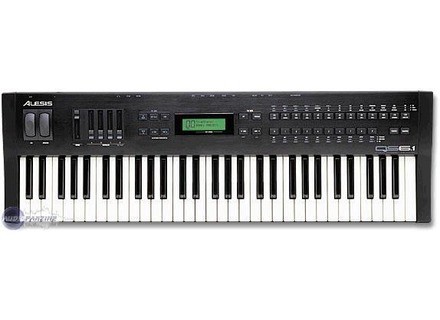 All user reviews for the Alesis QS6.1

Average Score:4.4( 4.4/5 based on 5 reviews )
Value For Money : Excellent
Not satisfied with those reviews?
Our members also liked:

Alesis QS6.1
3
The Alesis 6.1 stands for the version with 61 keys (5 octaves). I has a couple of 'pitch wheel' controllers and four sliders for sound variations - all of which of course can be assigned to the parameter of your choice.
On the back you have the stereo outs (Jack), MIDI IN/OUT and THRU, a couple of inputs for Sutain Pedal and Continuous Controller and an expansion port for additional sounds (PCMCIA).
The synth is pretty loaded when it comes to sounds. It goes through all the genres and also includes a nice FX section (pretty good sounding Alesis algorithms). The synth has a 64-voice polyphony...very nice (of course that diminishes when you start using layers).
There is a PC/Mac port (serial) but don't bother. It didn't really work back then and surely doesn't work anymore today...this synthesizer came out around 1998!

I found programming the basic settings and using multi mode to be quite straightforward. Alesis has always been pretty good in making their equipment easily accessible. This synthesizer contains so many ways to vary a sound though that it is almost impossible to retain a certain overview with such a small display. This has been the problem with almost any synthesizer from that time (and even up to now!). If you spent some time with the instrument it is pretty easy to get the sound you want.
The manual explains the functions pretty well. So far every piece of equipment I bought from Alesis did supply me with a thought out and understandable manual - big props for that!

Here we get to the part of the QS 6.1 I don't like. The sounds are truly amazing by themselves and really you have such a huge amount to choose from it's ok to have some that are not really useful. The problem becomes apparent when you try to incorporate them into a bigger mix or make a MIDI arrangement. All of a sudden they all get washed out and none of these sounds really has a clear definition in a mix. The Grand Piano for example sounds great by itself (maybe a little harsh) but if you want to use it in a mix it is nowhere to be found.
The same goes for live applications by the way. This is the reason people use Roland. They often sound terrible by themselves - but if you need to cut through two guitars, drums, bass and voices then you will see why they are so popular. I think the sound of the QS 6.1 is great to sell it in the store but I have not been using it for years now because I just can't get them to work.

I really like the versatility of this synthesizer. The FX are very nice and a lot of the sounds are very inspiring. What I like the least I talked about above - and in the end...unfortunately...this is what makes me recommend an instrument or not.
I think for the price the QS 6.1 was a very good deal but looking back I would haven been better off in buying a Roland, Yamaha or Korg.
Did you find this review helpful?yesno

Alesis QS6.1
4
I bought this unit online throughout Musicianfriend.com, at an incredible price of $599 for this powerful tool.
As I live overseas, buying online was one of the only options, but at the same time I was able to make a good choice comparing the specs and reviews of Similar products.


Alesis Q.S 6.1 has one of the best price/satisfaction relations you can get.

Alesis q.s 6.1 has fulfilled my expectations completely, of course there are more powerful synths with more sound construction elements but they are at least 3 or 4 times the price.

the QS 6.1 is a strong quality unit

It is more than you can expect for this amazing price. Satisfaction guaranteed!

tuchap's review (This content has been automatically translated from French)" robust and big sound."

Accs the presets (basic sounds) very simple: they are classs group of instruments (piano, organ, bass, horns, synth, fx etc ...) and the buttons are big AAVP flexible, very practical live.
The display is large and n used the preset is displayed in large, very readable and contains a lot of info.
For the edition, using the same keys as for the sounds, the functions dpendent mode in which it is: program (game mode preset single), mix (mode or keyboard sounds mutiples Splitt call performance elsewhere) or effect (for editing effects).
The Publishing of sound and mix is relatively simple and logical. For cons, the effects are quite complex edit, the structures are quite twisted effects and requires the doc ...
The manual is well done. Then there

the big sound: dynamics and clarity. Large well-sounding bass and leads many aggressive.
Some pianos are very good for the era, it is certainly raise better now but in most cases that's enough.
Some electric pianos and organs are superb.
The acoustic instruments of the type brass, woodwinds are fairly GPs but it is a synthesis of over 10 years ... do not buy it for a.
The tablecloths and leads are good overall. There are tablecloths spirals that are excellent and leads that really hurt. Most sounds are usable as is.

For fans of 70s progressive rock, then it's the icing on the cake: there are many sounds of gunfire keyboards K. Emerson (he is also the author of a piece of demo), several Mellotrons (especially the sound of the intro to "Watcher of the Sky" by Genesis, beautiful) and other vintage keyboards.

The other big intrt is optional PCMCIA cards (QCards) that can still be found on EBay, and who bring a lot of sounds very very good (especially in Vintages Cards Keyboards, Vintage Synthesizers , Orchestral). We can use 2 at the same time, and has really become standard.

+ Big sound and the presets, overall very good.
+ Very robust manufacturing, wholesale and chassis mtal plastic sides. The design and manufacture are well above many current keyboards. Made for the live. Indestructible.
+ Possibility to read sequences are noon to CRER his own instruments from samples, CRER new sounds in sysex and load all on a PCMCIA card with the SoundBridge software free.
+ Sounds contributions by QCards.
+ The effects are very good, especially Leslie (Alesis rput silent in the area of studio effects).
+ The use keyboard master.

Conclusion: the current price of this keyboard on the market opportunity, the sounds and the possibilities it offers are truly exceptional, if only one takes the trouble to seek QCards and exploit the possibilities of PCMCIA cards with SoundBridge. Ideal if you want to Get You Started with a group of friends without breaking the bank. Report qualitprix secondhand unbeatable.

Warning: other models 61 keys (QS6 and 6.2) were less OF INTEREST. Synth
Did you find this review helpful?yesno

neomad's review (This content has been automatically translated from French)

Not really easy but not impossible. The edition is breathtaking. The manual is very clear.

Except wood and wind, definitely not a home on a lot of synthesizers, pianos are very good (boessendoffer 290). E. piano are superb, with synths follies, beautiful bodies (with leslie almost real!).

I think this synth is much better than its competitors of the era: NS5X and XP30. Deja technology, Linear 48 bits of 44K. These four multieffects program, these filters, modulation matrix ... robust construction, its potential for expansion, its four assignable sliders noon, a real instrument!

I love him, and I will love forever.
Did you find this review helpful?yesno

piaz's review (This content has been automatically translated from French)

The keyboard is one such model (some would describe as semi-weighted, in my opinion is wrong, but it has a nice resistance, and a perfect break for a play staccato)

Pitch and mod 4 assignable sliders, aftertouch, velocity and relaxation, two entries for pedal (do not make me say ...), MIDI trio, and a serial port PC / Mac.

It comes with a CD containing samples, a utility to balance the MIDI / sysex in, and the software to burn out samples of virgin expansion cards (yes, the power of the Alesis is that 'with two expansion cards blank to you 16 MB of samples in synthetic characters customs, for much less than the price of a big synth). Oh, and SoundDiver Alesis, really convenient.

9. because we can do better in weight, and lack of control buttons!

Configuration is very simple, but powerful. Effects out of the MIDIverb4 guarantee of quality, but also "Metallite" sound. Extensive modulation matrix.

The manual is clear, funny, little (120 pages), and anyway we understand yourself flipping through the menus. On this point, the handling is a bit difficult to control the many pages (but the screen was small before the QS6/7/8 it have a larger screen, but they have not changed the OS ).

Editing sounds is fatally easy, the effect takes some time for the configs effects are fixed and routed in a fixed manner.

7, because the effects could be modulated, and the OS a little more friendly (although I do not really see what lack of obvious ...)

So there it is difficult. The sounds are endearing but unrealistic ... (genre, it's not the strings, it's not a scratch, it's not ... but it should not be confused with another. A sax does not look like a real sax, but it's exactly the type of sax, unequivocally. It's pretty hard to define).

The famous piano is good, but took a hit with the old New later models of competitors. And it's a Bosendorfer, then for the Tori Amos is great (it sounds really good), but for the rest, including the classic, it means.

In addition, the sounds are unpleasant if not "processed". In fact, it sounds already mixed. To read or compose in a MIDI pre model, it's great to play live, it's a different story. However, this flaw (although very useful on the pads and other synth sounds) does not exist on expansion cards, and then, as you can load their own samples ... Personally, I have samples of WAS, Rhodes and B3 Sonic Reality, and that changes everything.

I have 3 years.
What I like most is the fact that for 6500 F at the time, I recovered a synth with good effects (for the industrial or King Crimson, to note is the synth Reference Keith Emerson, who plays it to the Brain Salad tour, with the sounds of the factory), a keyboard on top, unbreakable, look fabulous, metal, and with which I could play any What instrument via expansion cards to fill yourself.

10, because nothing can replace it for me as well 61notes (especially at the time, and he was fighting with the poor XP30 and N5). At best, complete (a VA1 Kurz?)