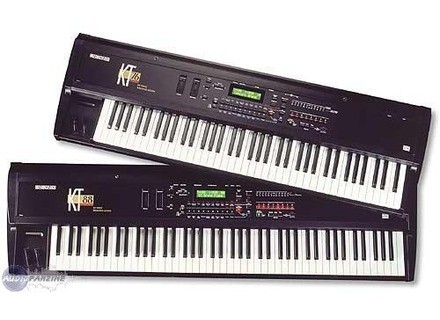 gerfaut's review (This content has been automatically translated from French)

Ensoniq KT76
5
** Keyboard **
76 weighted keys with consideration of the velocity and aftertouch. The setting is moved to accommodate everyone, but despite the hammer mechanism, we do not find a real piano touch. Not bad for a product of 1995, although since then, inevitably, there are better!
Note: At home, some keys are a little "squeak", which can interfere when not playing hard, even if the recording is not a problem!

** Controller **
The classic Pitch Bend and Modulation Wheel and the ability to connect a sustain pedal (single or double) or an expression pedal. In addition, the keyboard accepts external MIDI controllers.
The sounds and presets (= sets of sounds) can set fine enough to allow the use of many additional controls (aftertouch, LFO, Sustain, velocity, heading, etc. ...). A controller can also be associated with different settings for different components to vary at a time.

** Connection **
There are two output jacks asymmetric (left + right), three MIDI (IN, OUT and THROUGH), a sustain pedal jack, making a pedal, a power outlet (110-220 V) and a stereo headphone jack on the front.
I would add the presence of a card reader PCMCIA format to extend the memory or the number of presets, but I do not have that kind of memory card, so I&#39;m not used (ENSONIQ was acquired by E-MU&#39;s brand products are distributed anymore ...)
It may be noted the absence of a digital output (type S / P-DIF), however, offset by the high quality converters N / A.

** The **
Synthesis technology is here based sample playback. There are 221 waveforms in ROM (or 6 MB). The samples are quite varied and can make sounds convincing enough. The polyphony is dynamically assigned (the priority of 64 votes is programmable). You can use up to three samples for a sound with each: a LFO with delay, three ADSR envelopes (39 preset envelope shapes) and frequency filters (2 PB / PH / Bandpass).
It has 128 presets GM (standard set, very convenient to play a. Mid without complicating their lives), 100 presets and 80 programmable ROM.
One can easily make sound combinations (up to eight sounds by Max combi) and store them in the 100 slots available in RAM.
It should by no means miss the good effects section that includes a 24-bit DSP (chorus, reverb, flanger, phaser, stereo delay, EQ, distortion, and its turning 5 others) very good. Ensoniq has frequently been praised for its effects processors ( DP4 ... ( https://fr.audiofanzine.com/produits/index%2Cidproduit%2C15306.html ) ) that we find here the components.

** ** Polyphony
The synth has 64 voice polyphony, which is really not bad, and lets see what coming, even when the sounds begin to pile up (or combinations sequencer ...). It must still clear that this track, not rated, let me explain: an instrument can have up to three channels per note. But the priority system and intelligent ways to manage the overflow does not end up with tablecloths cut short by a new note! In practice: no problem what!
Note: The keyboard can be easily spliter 8 part with Volume, Sustain or to send to different effects.

** ** Sequencer
Yes, we do not really know where to categorize this synth, so there are many possibilities. Indeed, the sequencer (despite his age) is worthy of a good workstation. It has 6500 notes (expandable to 100,000 a PCMCIA card), 16 tracks for a total of 70 sequences and 30 songs (= set of sequences). Real time or step by step, punch in, quantize, transpose, event filtering, event editor are all means available to achieve his ends in all circumstances.
All programming is done using a few buttons, a slider and an LCD display (2 x 16 character) backlit! It may seem complicated, but in the end, the interface is well thought and with a little practice, you come to work quickly and very productive.

** ** General Setup
The general configuration is fairly simple. Not immediate, sure, but once you understand the basic operation, it goes very fast, and above all, faster and faster, and we realize that ultimately, despite the reduced number of keys and displays, it&#39;s more ergonomic.

** ** Sequencer
Thus, the sequencer allows a very precise work, and a large factorization (required on this type of model, to save memory and time too!).

** Music **
In terms of sound is a bit more complex! They are so changeable that it is better to have the manual in front to check the influence of each parameter. It is clear that there is enough to create! The interaction of the controllers and time can easily adjust the sound playing. But perhaps the side that I have the least explored over the years. To each his own, personal, creative sound research, it did not caught.

** ** MIDI
MIDI level, not much to say. This is a great master keyboard. If one switches to GM, 16 tracks were directly assigned to each MIDI channel and one of the 128 standard instruments (except for track 10, with drum sets). As a result, the function expendeur MIDI is really extremely simple (perhaps a bit too!)

** Manual **
Again, not much to say. Oh yes! It is in English, very comprehensive (= a lot of time reading for anyone who wants to know everything), but very well written, and (normal for the time) delivered in print!

** Style **
Beyond these technical considerations, my personal opinion is that a sound is good, when it rings! And then, there&#39;s no denying it, the KT-76, it rings. It has a grain and warmth unique to U.S. keyboards which changes slightly from what is heard on the side of the country where the sun rises. And nothing that&#39;s nice. It sounds not like everyone else, and besides, there&#39;s a way to find combinations of sounds that complement each other well to create impressive for the preset accompaniment (piano my main activity).
When you mix the sounds, it&#39;s not always the most realistic one chooses, but one that finds its place among the others, while many emerging. It does not interest me a perfect model of Steinway drowning in a mix or a group!

Do not trust provided that no instrument is usable in private! Y&#39;en many who are very good (excellent pad, choirs, organs, brass and so on ...), and play a sonata on the piano is not a problem. Unless it is clear that for this kind of use, of our days, there are much better!

** ** The effects
As mentioned above: the effects are those of DP4, old enough now, but still considered a reference and quite sought after by the way!
They can fine tune the routing can be modified by the controller. Only limitation, we can choose only one at a time (the same for all instruments in case of split or sequence). It&#39;s sad, especially in view (or rather listening to) the quality of available effects.

** ** The term
It is adjustable, with several courbles velocity. It includes his account. The aftertouch (called rennet, a bit confusing at first) is also configurable, but is monophonic (that is to say the same for all notes played simultaneously). The polyphonic aftertouch is also managed, but only via MIDI (not for registration).

** Conclusion **
I use it now for ten years, and I think I made the rounds of just about all the features. The upgrade to the E-Prime gave me the opportunity to search for new sounds. But apart from the significant gain for the piano for the rest, I have rather been destabilized by the replacement of certain sounds with new ... It is not easy to change habits and re-create new presets that sound good and balanced by mixing five or six instruments. Matter of time probably.

** Negative **
- The keyboard a bit noisy, creaking for some keys, annoying at low volume ...
- It lacks a number of controllers to drive the latest VST instruments, it is probably on this side that the 11 years of the craft are greatest
- Some (rare) crashes since the upgrade software E-Prime
- No digital output (S / P-DIF)
- His weight (though quite reasonable for the class ...)
- Use one effect at a time

In the end, not much to complain about, except his age, and yet, compared to other products, it has aged quite well!

** Results **
Well, it&#39;s not easy to be objective with the instrument we coasted the last 10 years, but I do not regret the choice. However, I do not remember having tried several at the time, it happened to this one: the right width (to fit in the living room), good price, and ... That&#39;s it! In retrospect, it certainly was not the designated use that I had at the beginning (as early autodidact piano!), But ultimately for use in the discovery, I come to explore a little every facet of the instrument.

** Future **
Obviously, in the future, I can not say that I do it again this election! Times have changed, my motivations, too, the products are (really) nothing to do ... But nothing wrong with this keyboard, always faithful to the post, and for some time to come, I hope!