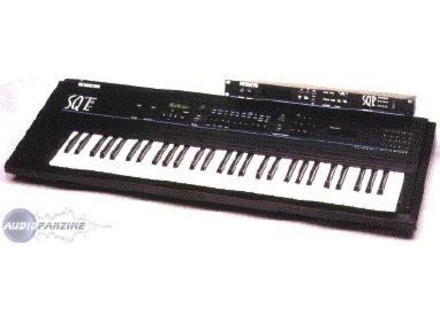 paradies's review (This content has been automatically translated from French)" mconnu and that's a shame ..."

Level Exceeds the sequencer polyphony is today would be a gadget, put its strengths lie elsewhere.

Section presets can return to edit mode and even if so is via menus is not trsmchant.

One can make a sound composed of up to 3 waveforms from a sample of sample or waveform (sine, sawtooth, square, triangle etc.)

An effect is also included.

So we're not going pa sment: presets are average because dats. But we can get things out of compltement connection communication with this synth.

Epoque d50/M1 and company. But if we spare the fashion of the era to make the sounds that we want to hear now was the equivalent of a CASC virtual analog well endowed!

The sounds are against ralistes Exceeds let's be clear.
The drum kits like this.

I've had the good few years. It has never t my main synth.
It is not for. We find it neither a piano sound that kills.
The presets are too "dj vu" to justify its purchase and it is difficult to find its banks.

But it was one of the few digital synths and I take pleasure rms makes sounds, and is way out of the trs things bluffing.

Ensoniq SQ1
5
124 synthesizer using sampled waves, acoustic and synthetic and process-specific Ensoniq, the famous TRANSWAVE with extensive harmonic complexity and stamps lively!
61 touch-sensitive
2 banks of 64 presets (all sounds from 1 to 3) + 160 option cards (rare and expensive !!!!)
13 types of effects entirely paramettrables
9000 sequencer inputs (expandable to 58,000 with the kit SQX-70)
bend and modulation wheel
Connectivity: 1 out phone, 2 line out (1L-1R), MIDI IN, OUT, THROUGH, IN sustain ped, foot control Optional In managing the home in / out and sustain
Polyphony 21 Notes

The SQ1 brings a synthesizer to sound quality (though bold, is the US's!), 24-bit digital effects, an 8-track sequencer is provided with all the mixing functions.

Must spend a few hours tweaking the beast but once understood the principle, we discover all the subtle nuances that were (and are Always for me

Manuel clear but almost impossible to find in French!

The synthesizer of SQ1 has 100 ROM sounds extremely faithful and 80 other sounds in memory, which can create / edit.
Each of the SQ1 is created from three digital oscillators using 124 sampled waves, noise (sampled at several points of the range for a given careful and very realistic!) Or digital, as well as the unique process that has an Ensoniq Transwave complex harmonic timbres and vivid.

In addition to this (very) wide range of sounds, it has a built-in digital effects processor, adding the scale and intensity to each of the sounds of the baby. Various programs reverb, chorus, flange, delay, distortion and even rotary speaker are available while being dynamically controlled in most settings.
one can even effect a distortion i / o Level 11! (joke taken from a funny movie, "Spinal Tap", which chronicles the life of a touring hard rock band the same name, like a doc. The guitarist claims to have a Marshall amp custom built with the volume knob goes to 11 instead of 10, to be more powerful !!!!)

The 8-track sequencer combines the ease of use and sophisticated features that are not found at the time (release date 1988!) On programs séquence.Il record 9000 entries, but can be extended up to 58,000 with the extension SQX-70, with a resolution of 96 clock pulses to the black. After recording the tracks, the edition (step by step, quantization, offset track can shape its prod in unimaginable ways, and Always with the opportunity to hear the changes before making a descision. Autopunch function can set Punch-in/out to record "hands free" in the studio.
Each track sequencer can play the internal sounds of SQ, the sounds of two external devices oules!, Each with its own MIDI channel, MIDI Program number, status and MIDI output level controls réglable.les sequencer can also combine multiple internal and external sounds to create your own overlays, splits, overlaps to improve possibilities of play!

All this allows the SQ1 to act as master keyboard in a MIDI system complete.
The SQ1, little brother of the famous VFX, is also labeled "Personal Music Studio"!

Gift from my wife and children, I utiise since April and I have every intension, now that I have hacked the baby, to make the most!
Pye 100 miserable little euro OCCAZ a great machine for almost found today, I think integrated with enthusiasm and never get tired.