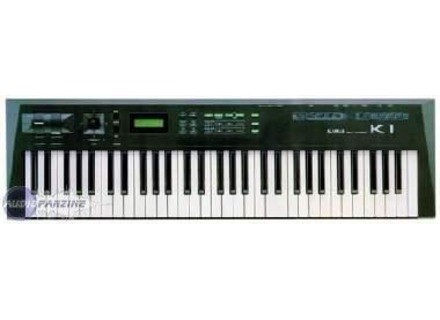 Kawai K1
5
FOR THE TIME, well ...
Very good hit, polyphony to 16 voices, no built-in effects (damage), standard connectors 80s' most is his Joystick for mixing live sound for many, like the Roland D-50.

Editing sounds is still easy even without a publisher, despite its small screen you get there without taking the head too ...

The sounds are quite original and markdowns of its Japanese competitors of the time (Yamaha / Roland / Korg). The K1 has a grain rather "dirty" and warm, you can get beautiful tablecloths and very interesting leads, forget the acoustic sounds that are not really good, the Kawai K1 excels in synthetic sounds.
It will put their hands in the dough or download sounds on the net for those factory do not reflect all that can get this little synth! In addition it will also put him a multi effects (reverb and chorus).

This little synth almost made me dream when I was little, so I broke down and I bought it in a new condition, 26 years after its release. It is very sturdy despite its plastic shell and a weight of almost 7kg to be so compact, reassuring. I love its design and touched his grain is special. No problem switch (unlike other machines of the time, such as the Korg M1 series or Roland D). The keys are as they have very strong and show no defects contact. In summary this is a very small, rugged reliable synth with an original grain.

Manual setting clear, but it's a real synth

One of the first to have aftertouch which is not very useful but good.
The problem with wavetables is that there are several samples for the entire range and is meant well when moving from one to another.
It does not really character.

This is my first synth, I keep it out of nostalgia (bought with my first pay) not for these sounds, I have the rubber is worn under the C5. One thing that was nice was the ability to mix live different waveforms of sound.
I have used it then master keyboard, Midi implant is complete.
Insufficient because today it is much better for the price.

nan3200's review (This content has been automatically translated from French)" mixed"

Kawai K1
3
the synthesis is not really one, a blender instead of curly waves.

but some cool sounds, sheets or percussion (attacks).
no true synthetic sound in there, the time was to sound "realistic" .....

the manual is necessary, the interface is poor!

the keyboard was pretty original, it ages pretty well.
to 20 years, it lacks one or two buttons.
after experiencing a lot of transportation.

long been amortized, but still alive!
So, not bad.

sounds are typed and usable, but not too much because a little the same.

landais85's review (This content has been automatically translated from French)" Super value for money!"

Kawai K1
5
Refer to the description of Audifanzine as usual everything is clear and bein done!

Very simple, the manual is clear enough and tweaking sounds in manual 'control' is rather intuitive, it is fast fun.

Some sounds may sound a bit 'vieillote' but as said before everything is editable. The basic sounds are there
I also use it as master keyboard on PC and also on MAC, impeccable!

It's sturdy, the components do not shake, SAR, not even a crachouilli or breath.

Kawai K1 manuals and other files