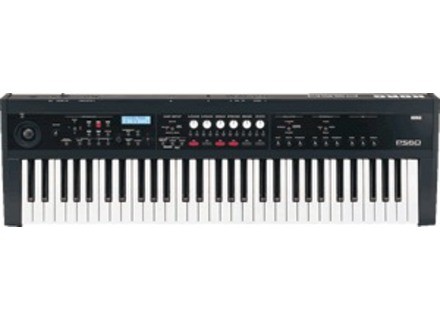 All user reviews for the Korg PS60 Performance Synthesizer

Average Score:4.3( 4.3/5 based on 4 reviews )
Value For Money : Excellent
Not satisfied with those reviews?
Our members also liked:
Editorial review
Users reviews

Korg PS60 Performance Synthesizer
4
The Korg PS60 61 is a performance synth that is made for a live musician. The Korg PS60 has a very nice backlit display on it that no matter what your lighting situation is where you are you will be able to read the screen without the need to squint your eyes. The Korg PS60 comes with a manual that is in depth in helping you understand all of the functions of the Korg PS60. It also comes with a quick start guide which is more like a watered down manual with just the basics.

The Korg PS60 has a total of 70 different effects and has a very user friendly interface. The keys have a great response to them and they are semi weighted. The sounds are all broke down into categories like Electric Piano, Organ, Strings, Brass, Synth etc... All of the sounds are well designed and are perfect for performing with.

The Korg PS60 is supposed to be portable but to me it is a little bigger than expected and definitely heavier than I expected it to be. It does not come with a stand, bench or speakers. So these are things that you will need to have if you are going to be gigging with it.

There are many positive things about this keyboard when it comes to gigging with it, but for the price it might be better just go with one of the Yamaha keyboards with similar specs. They are a little lighter and less expensive than the Korg PS60. Also I have noticed with the Korg PS60 that over time they keys may start to stick. This can happen with any keyboard, but I have seen it happen frequently with the Korg PS60. It is a great keyboard and at a decent price, but for gigging it should be a little smaller. Also, the output volume is kind of low for it to be a live keyboard.
Did you find this review helpful?yesno

pico's review (This content has been automatically translated from French)" Not the top, but do it live!"

Korg PS60 Performance Synthesizer
4
Dedicated keyboard in the fourth a kind of north "electro light"
Super light, one wonders if there is a 61 key keyboard?
The serigraphs are on top and a little plastic chip, but good consideration is the light weight!

I think it's so easy, it does well in the case of full register, pianos, synths etc..

Being able to mix easily with six instruments to find his ideal, even if each individual sound is not what it does best in their category, considering the price is normal.

The hit is nice for me it is very easy to play it and it does not tire your fingers because it is very light and at the same time some momentum, it not worth a heavy hit to play the piano, but the sounds board responds well I think.

use is very simple, you touch, you play, and you mix your sounds and effects you added to the end.

Using live do it well, for as against it is very light, it's best to secure it on its stand, as it tends to move!

They are not too bad, is a kind of home best of Korg in the "middle class", not the high-end, but I knew very well by buying it.

The pianos are all well I think for the stage, because they have good momentum and a back side 80 that I like.

The onboard effects adds an undeniable + and efficiently.

I bought it for piano and organ at the base and was pleasantly surprised by the other sounds, such as accordion sounds very credible? Synth sounds well studied, the sounds of guitars sound weak link but I do not care a bit.

+ Light weight of 5 kilos.
+ Ergonomics.
+ Sound quality for the price.
6 Stackable sounds very practical.
+ Split mode
+ Made in Japan (I think it's rare)

-A little dubious quality to the touch on the strength of the whole, (a view for use).
Silkscreens them a bit cheap.
-The lack of depth keys to the subtle play of a piano.

Korg PS60 Performance Synthesizer
5
Keyboard 61 keys that do not breathe the strength (plastic is fine) in principle but in fact semi weighted rather mou.Le drawing buttons is not great there are hooks on the side. This is the weak point of this synth, but nevertheless the use we feel no discomfort. It's just a pity that all this synth is presented by Korg as a synth scene and fragility (apparent) is inconsistent.
For the rest of the features it seems to me very well.

The basic operation is simple even if the user guide is needed for certain functions which eclaicir editions. But it is very easy to obtain very quickly the basic sounds.
After there are several levels of edition:
the global easy
performance: in fact split, mix and choice of sounds, indeed global, it's pretty simple once you understand the procedure
sounds: there it is better to recover the "reference guide" and there he is reading (in English print in duplex is ca 3cm)
Overall use is easy, I just regret that there is no quick access to the velocity (painfully note the certain sound of violins).

Guillaume_76's review (This content has been automatically translated from French)"Simple, effective and lightweight"

Korg PS60 Performance Synthesizer
4
The PS60 is a synth five octaves (61 keys) with over 400 sounds divided into different categories: piano, electric piano, organ, strings, brass, synth. The list is in sound. Pdf on the korg site (better to be warned that there are no sounds of percussion and drums).
The various videos found on the net and give the test on AudioFanzine a very good overview of the features and possibilities.
The luxury of six stamps simultaneously mix is ​​very effective.
The publication of a "performance" custom is very simple.
The main parameters are accessible by judiciously arranged knobs (volume, octave, effect level, level of reverb, equalizer, etc. ..). For the makers of sound, using the supplied software on their computer can go right to organize and edit the sound bank to archive his experiments.
Controllers are assigned to a joystick (four directions) and vary from one sound to another. Everything is adjustable so but the factory settings are designed perfectly. Some sounds (wawah guitar, lead, sounds SF) all take their meaning with the use of the joystick which is very natural.
MIDI and USB outputs allow direct interface with the computer. however, the audio does not pass through the usb (you must connect the audio outputs simultaneously to fully exploit the machine).
The synth is sold without any pedal ... buy a sustain pedal (in € 15) can be very useful (eg in the keyboard splitter you can leave a slick sounding organ playing by the left hand, switch on the sustain pedal to hold from this agreement and solo with the right hand while recovering the freedom of the left hand to control the joystick: hovering effect guaranteed!).
Everything is very light (less than 5 kg) and very little space.

The general pattern is clear.
The manual is very clear.
Editing effects is particularly simple.
The ability to mix sounds is as simple as suggested by the demo video (everything is accessible through the buttons not need to go in endless menus ...).

The sounds cover a wide enough range that is allowed to play in many styles. To appreciate the synths in this range, it is important to be aware that loads a sound in real time on a synth 5kg less € 500 can not compete with banks in several gigabytes of sounds that put a time to put in the memory of a computer.
I tested extensively on various synth system (headphones AKG271mk2 pregnant proximity of MS20 and behringer speakers of proper quality pc).
In the pleasant surprises I would classify some classical piano (including "stretch" which is rich enough in the mids and the game is really natural, despite the light touch), several electric organs (they are very different), one set of strings (the "filmstrings"), the "split choir" that blends really well with the other sounds (no matter how octave is played, the sounds are in a range of natural voice). At the bank "synth" there is really any (ground atmospheric techno sounds, synthetic brass, glockenspiel, bass ...) and certain leads are really convincing.
Other sounds seem rather weak as acoustic guitars and brass.

In the gaps, it should be noted that there is no percussion or drums (which will not disturb too much musicos group in standard formats). More curiously, despite the variety of sounds available, there is no pizzicato that could comfortably support the layers of strings ...

It also lacks an accessible tap tempo to fit the sounds live "technoïsant" to changes in tempo.

I use the PS60 for two months. I tried the roland juno Di and yamaha mm6. These three keyboards were all likely to respond to my use. It is difficult to separate them as they are full of possibilities for a price close enough.
What convinced me to korg is its price (cheaper than the other two if you&#39;re looking good!), Low weight and small size, its ability to mix sounds and operation via intuitive knobs. Other models offer greater opportunities (arpeggiator, drum machine, sequencer) but it does not correspond entirely to my use.
As guitarist at the base, I intend mainly to rehearsals and live performances (group rock / metal mostly) to bring varied sound to the songs and put some piano harmonies. This little korg also immediately found its place in my home studio in addition to my digital piano and I use as a master keyboard to the mao.

The quality / price is very competitive (€ 485 for new purchase) but it is essential to know your needs before moving on that choice.