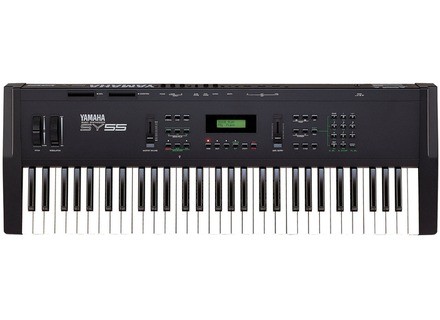 SY55, Digital Synth from Yamaha in the SY series.

Editing and rgonomie super logical and simple. I never retrouv such rgonomie on a synth.
In addition, the possibilities are quite dlirante edition for someone who looks REALLY on the issue, not like some mangy coyote ....

I use it since 1990!
He walks impccable!
this is my master keyboard and dchire sheath coyote!
I have other synths ... but this one rocked the level of what we can do from his set of factory samples. And this is the only afford to indulge FAST. The other plants are gas ...
quality HONTEUX price !!!
This synth is totally under rated !!!
Lamentable! I do not even change my 2 against KURZWEIL K2600s !!!
Did you find this review helpful?yesno
»

Yamaha SY55
5
It is a small workstation, ie a sound module together with a sequencer.
it's a real synthesizer, in the sense that it really is editable.
We can add him cards with samples and additional sounds.
I used several years.
It is very reliable, it never let me down.

Like all synths, it must be used to understand

I would not hesitate to do it again this choice if I had to buy this kind of synth.
Did you find this review helpful?yesno
»

Yamaha SY55
4
Early synthesizer range Rahum to 1300 euros, oh could ... naise, when I see what we can offer today ... with the money at the time below, there was not really synthesizer, rather stuff like pss and other Bontempi. I wanted a real synth with envelope filter effects.

The sy55 workstation is ...: a ROM 2MB (no, that's not a typo) corresponding to 74 (!) Samples thus trying to cover the range sound: piano, winds, strings, synths , percussion, drums. These sounds are spread over 64 ROM and 64 RAM. ROM and RAM same origin.

A maximum polyphony of 16 notes, one mutlitimbralité 16 sounds, 8-track sequencer / 8 bits / 8 multi (step, Punchin ...) for 8000 events in permanent memory, a 34 multi effects for most simple effects with some couples in the batch.

After reading its features, we realize that the beast has grown older and can not really compete with the current keyboards on any point, except:

Its synthesis: it is certainly less rich in possibilities, but it is still capable of providing sounds interesting especially when trying to create synthetic sounds, I am often out of LA 'saw' in memory. It had to do with what we had on hand! The summary includes most elements of subtractive synthesis: pitch and envelope, amplitude envelope, filter envelope, an LFO, while that by element, each patch can have up to 4 items, but so watch polyphony .. . contains memory as pulse, triangle plus some variations. Output, there are two resonant filters (with the quality of the time) but not so ridiculous as that.

Its simplicity: it all eventually, but so basic, so we do not waste time searching a particular function, or where it was stored in the patch-death-that-kills since quickly swept the 64 memories!

Finally, we can obtain a certain thickness and a certain originality that make it quite endearing.

Forget the sound "acoustic" unless it is to divert so they are exceeded: loops mean, no multisampling, so its already bad at the base becomes downright rotten in the treble!

In summary, this is something else, this is not a monster, but you can get interesting sounds.

Effects? They are also bad, but hey, it's better than nothing.

Everything is digital and based on its computing power and memory aging badly, since this area is progressing at the speed of light. Fortunately for me, the SY55 has some elements of synthesis that gives this little timeless character that makes it endearing, despite his age.