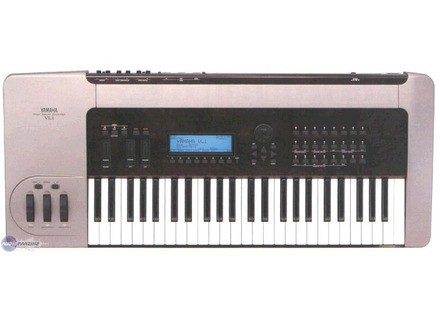 Yamaha VL1
5
Even though this synth is over 20 years old, I haven't found any hardware or software synths that can duplicate its quality of sound. From breath-takingly accurate reproductions of wind instruments to hair-raising creepy sci-fi sound effects, it can do it all. It's my #1 synth.
I use a wind synth controller with it, which is a great way to control the multitude of available parameters in a musical way. Being a wind player, the monophonic technology is not an issue. This machine is all about melody and foreground soloing.
Programming it is tough. Though there are sound shaping elements that work on similar principles to subtractive synths, the main sound engine is based on creating a model of an instrument, not on oscillators and filters. It's a steep learning curve, but you can learn a lot by taking existing patches and modifying them.
If you're a VL-1 user, I host pages of VL software resources on my site. As of June 2017, there is a new VL1/VL1-m/VL7 librarian available that runs on modern Windows or Mac hardware. A new patch editor is also under development. Read more at my site.
Did you find this review helpful?yesno
»

davidsynthé's review (This content has been automatically translated from French)

The particularity of these sries synthtiseurs is that they use one hundred percent by the synthse MODELS physical. There is a SERIES of synthtiseurs VL, but among them, the VL1, marketed in 1994, is the most successful. The VL70m VL7 and are a simplification of VL1 and VL1-m VL70-m and are expanders.

The VL1 marks a step in the history of synthtiseurs musical performance and engages in a new dimension. Learning matriser the Controller of VL1 with breath that is ais dapprendre dun play acoustic instrument and can play any instrument nimporte wind with one and the same device. It is possible dobtenir with virtual instruments and effects impossible in Ralite: ambitus a gigantic, impossible with a virtuosity linstrument rel constraints, etc.

Extract http://virtualacoustic.free.fr
Demos available here: http://virtualacoustic.free.fr/HTML/Demos.html
The VL1 offers numerous advantages in terms of music programming, not only in terms of sound reproduction but also in reproductive behaviors specific to acoustic instruments that make them, if musical instruments. MODEL The physical can be programmed to provide a number of deals inhrentes the instrument (the length of a pipe or stiffness of the reed, for example).

But it is only playing that can be rgler with precision the sound produced by a particular configuration. Because of its natural acoustic behavior, the VL1 is naturally a little more difficult matriser synthtiseur a classic, but its the CONTRL CHARACTERISTICS allows precisely dvelopper its huge potential.
The VL1 sounds better and offers more depth and ism in the musical sense of the word, than any of synthse Systm.

Same pressure on the same key will not produce the same ncessairement his giving an impression even closer to the Ralite. The instrument is "alive".

Changes of note note, reproduce the same fluid as those expressing by acoustic instruments. What happens between the notes is as musically important as the notes themselves, same.

The capacity of expression is remarkable. Plutt CONTRL a simple volume or pitch, you can rgler of paramtres as the breath or the pressure of the reed so doing Fawn prcise and appropriate on the stamp of sound.

Yamaha, Korg and Technics are the first manufacturers trying OF USE technique synthse by physical MODELS. Their business is stratgies diffrent, and dmarches distinct. We must all prciser synthtiseurs by using synthse employ physical MODELS The models exclusively waveguide. If manufacturers adopt this synthse giving different names trs (S / VA, MOSS, Acoustic Modelling) it is indeed always the same technique.

Whereas when all that fails to synthtiseurs traditional physical The models seem to be a nice place on the market.

Yamaha VL1
5
The VL is a virtual acoustic instrument, it is in a single device a lot of different instruments with an acoustic performance that sound mostly "true." 49-key keyboard, it also has a range of effects of good qualities.
The polyphony is more than two notes, with three modes assignment, mono, poly and unison.
The VL is a very beautiful and is a soloist on four octaves.

Using this keyboard is quite simple, we must say that Yamaha has voluntarily restrained. Indeed all the changes permitted usually found on other keyboards, including synthesizers, although there are many on this keyboard, can not get out of a clear framework, the basic models imposed by Yamaha.
A clarinet is a clarinet, even if you want to add a sounding board or the reed is replaced by another further different. The only difference is that the NAV does not have a simple model of a clarinet modifiable at will, but many others with simple parameter setting will change the way the instrument will sound or behave.

Playing the VL 1 gives a feeling totally amazing. The acoustic sounds are a truly amazing for almost all the presets. Then when playing instruments "invented", you enter a world of science fiction. It goes something credible and very intense with unfamiliar sounds, a guitar sound with such an attack and a violin-shaped, the vibration of a reed on the mouthpiece of a clarinet ..

It is obvious that this instrument to virtual acoustics will never replace the real acoustic instruments, a simple comparison can distinguish the gap between the two. But it is an instrument multiple presets are all standard instruments, and actually turned to the possibility of actions incredible!

Yamaha VL1 manuals and other files