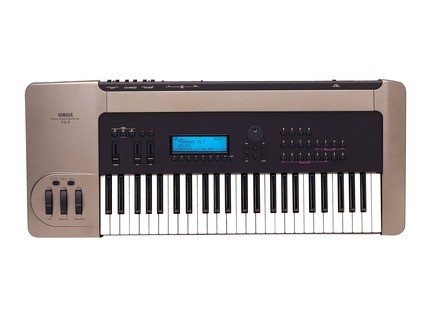 davidsynthé's review (This content has been automatically translated from French)

The particularity of these sries synthtiseurs of what is one hundred percent use of physical synthse by MODELS. There is a SERIES of synthtiseurs VL, but among them, the VL1, marketed in 1994, is the most successful. The VL70m VL7 and are a simplification of the VL1 and VL1-m, VL70-m are expanders.

The VL1 marks a step in the history of synthtiseurs and engages the musical performance into a new dimension. Learning matriser with the VL1 Controller of breath is more than ais dapprendre dun play acoustic instrument and can play any instrument nimporte of wind with one and the same device. It is possible with virtual instruments dobtenir effects impossible in Ralite: ambitus a gigantic, impossible with a virtuosity linstrument rel constraints, etc.

The VL1 offers numerous advantages in terms of music programming, not only in terms of sound reproduction but also in the reproduction of acoustic instruments specific behaviors that make them, if musical instruments. MODEL The physical can be programmed to provide a number of deals inhrentes the instrument (the length of a pipe or stiffness of the reed, for example).

But it is only playing that can be rgler precision with the sound produced by a particular configuration. Because of its natural acoustic behavior, the VL1 is naturally a bit more difficult matriser synthtiseur a classic, but its the CONTRL CHARACTERISTICS allows precisely dvelopper its huge potential.
The VL1 sounds better and offers more depth and ism in the musical sense of the word, than any of synthse Systm.

The same pressure on the same key will not produce the same ncessairement its giving an impression even closer to the Ralite. The instrument is "alive".

Changes of note note, reproduce the same fluid as those expressing by acoustic instruments. What happens between the notes is as important musically as the notes themselves, same.

The capacity of expression is remarkable. Plutt CONTRL a simple volume or pitch, you can rgler of paramtres as the breath or the pressure of the reed so doing Fawn prcise and suitable on the stamp sound.

Yamaha, Korg and Technics are the first manufacturers attempting OF USE synthse by the technique of physical MODELS. Their business is stratgies diffrent, and dmarches distinct. We must all prciser synthtiseurs by using synthse employ physical MODELS The models exclusively waveguide. If manufacturers adopt this synthse giving different names trs (S / VA, MOSS, Acoustic Modelling) it is indeed always the same technique.

Whereas when all that fails to synthtiseurs traditional physical The models seem to be a nice place on the market.