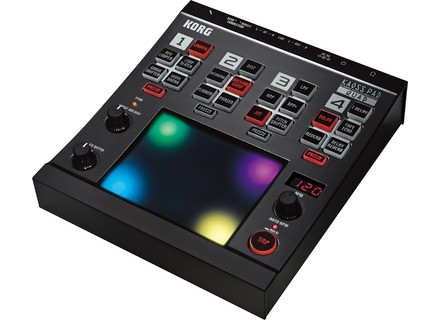 her-V's review (This content has been automatically translated from French)" A test!"

Korg Kaoss Pad Quad
5
To this point I let you see the instructions on the net ..

But not MIDI or opportunity to at least one sample!

Yep, the same strategy of Kord separate machine functions for better business.
I note this point so severe.
Fortunately, the price dropped. I would have been disgusted with this Kaoss paid for 300 Eu

Simple configuration to Korg. The usefulness of such a machine is of course in addition to something else. The machine is so simple it seems to me that they even forgot some thing in the manual!

Quality and will be made depending on the source and the game that can be done.

For my part I work Osx and its Logic. I have a midi keyboard and Arturia Bundle with all its great synth. But I always was a fan of Electribes and for me that I missed the Kaoss out of all these so that I discover, I see that Kord really innovated as to his habits and rebounded well from those that were simple Electribes use while being quite effective.
After I had the Radias few years but too complex for me, quick! ^ ^

To tell you the physical side with the music I missed terribly since the Electribes.
I bought new at a good price to sell it thinking if it was not the case.
It's hard to know what it's worth so that you not test it properly.

At first contact I was happy to "toy" with.
I did spend my whole component in this was his "effect". It was fun slumped on the couch!
After I did a test more seriously, and it seemed to be quite similar in sound and color combinations that I preferred!
I thought I was separated in a matter of time, then to test the KP3.
But this afternoon I was still doing some tests to see if I kept it or not. And then passing some tracks inside the Quad, then that I transmitted to me by Pro Kaossilator samples well then handed in my own component, well it was pretty!

So I found my way to work with and then I'll keep it a bit to see if this is confirmed yet or not. I find its usefulness with at least the "Loop" Quad more than I used to using it too beginning. Because I thought it would make a "dégeulasse!

But what made me bleufé is that the sound really changed with the finger next to it. I mean really in the millimeter. Also the source is often different normally. The Loop will be made somewhat haphazardly. The important thing is to put your finger on a precise time.
Sometimes it is nothing then suddenly magical!! and as we find a vein ... well we continued to search. I work with at least 2 or 3 finger resting on it.

In summary, left him a chance if you bought it.
I would have regretted being missed using that I made this afternoon.

Not for the Kaoss 3, but like to the test. I have a guitar that sleep and may wake up in someone else .....

I hope this review has been helpful.

5 of 12 people found this review helpful

mickydebz's review (This content has been automatically translated from French)" Not for guitarists ..."

All you need is a little ear, a little finger over a minimum of tampering, and lots of good effect. Made global numrique too my taste.

No big changes, it sounds like a KP3, except for the settings (for korg APRS) is RGIT by the user.

Now the party m'intresse. As guitarist and fan of new and weird sounds, I say "Wow ditable a KP3, I'll finally retire my old offer KP2, and get into my Creations." First connection, first test, yeah, I immediately find the bte, a big sound numriques each finger placement on the pad ... Well, a has to be me. APRS two months, always the same impression. Even with a layer of the pad for not unnecessarily slider, its always the same numrique impossible to combine some effects (reverb and delay for example), in short, I regret my KP2. I'm waiting to sell this thing for me back a KP2 and make me a little montage of Bellamy.

Korg Kaoss Pad Quad
4
The Kaoss Pad Quad has four effect block, the first includes the slicers, the second distortion and other third filters, the latest delay and reverb.
Effect blocks are in series, in this order if it is used from 1 to 4 effects simultaneously.
Input and output RCA + a microphone input jack (sic) with preamp, headphone.
No MIDI (sniff), the tempo, three methods: manually, tap tempo, or automatic detection (which works fine, but sometimes needs to be restarted).
The case seems strong despite the plastic.

This is the highlight of the Kaoss Pad, we have everything under the eyes, you know exactly what you use when you use it, you can change very quickly and very intuitive effect. Almost as if we had four of Kaoss Pad series. The possibility of "freezer" effect boosts the ease of use.
I reproached the Kaoss Pad series of not being able to choose its multi-effects, especially having to store the numbers of presets.
We can perhaps regret the absence of a small screen on the screen to be more self-assured (especially for delay time and slicers)

The effects are clean, nothing special ... They sound like the previous Kaoss Pad is a bit cheap for my taste, but perfect for live performance. For cons, I never used it for the studio.

I use it for a few months and feel are exceptional. Once again it's really a companion to the scene, do not expect miracles. But precisely in this context I find it perfect. I use it as master on my machine and it's a real pleasure.
Even if I find the machine a bit expensive compared to some criteria (quality effects, input / output RCA jack microphone input, no MIDI IN ...) I would do this choice because it is really an ideal partner for the stage. However, if I had had a much tighter budget, I should not cast on that machine first ...

Anonymous 's review (This content has been automatically translated from French)" Pad break 3 feet what a duck."

Ultra-simple to use, as all-KAOSS PAD.

Bought to replace my KP3, to shake the master of my MPC2000XL live.

Wanting to stack multiple effects in order to obtain personal belongings was a very bad idea on my part:
The effects of the KAOSS PAD, "very KAOSS-PADien" is likely soon to reduce the signal into something very cartoonish.

So, I get nothing personal, I do not use more than 2 effects at a time ... super!

I sold my KAOSS PAD 3-for-the one being seduced by the possibility of combining several effects, and achieve personal effects.

I realized my stupidity, after half an hour of use:
1 * Return to Sender
2 * Purchase a KAOSS PAD 3-


Question solidity, the KAOSS PAD, QUAD, does not inspire confidence in time.
This product is not intended for me, I lost sync and all that brings MIDI without gaining anything from flipping.

5 of 10 people found this review helpful

Published on 10/07/11
Korg USA has announced a new fall rebate promotion on some of their models.