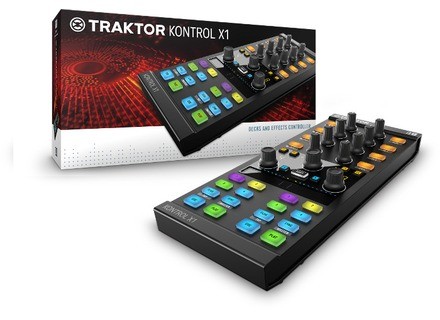 I used to instantly order my decks C & D in addition to my S4 mode 4 decks and upcoming A & B from the acquisition of a Z1 (2 players + 2 Decks Remix).

Having previously owned the X1 Mk1, I can say that there has been a real evolution with the touch strip.

It can be used in several ways:
- Pitch Bend playing: one side for each deck (A and B, for example)
But it can also "zoom in" pitch bend on the entire band for a single Deck,
- Read + SHIFT: to scratch or to make a feedback,
- Paused: needle search,
- By pressing the center of the strip and one of the FX buttons, you can assign it to the control parameters or Dry / Wet an effect,
- Similarly to the loops by pressing the activation of a loop.
Each time, the LED located just above the band indicates the areas where we should support (Loop 4, 2, 1/2, ... the level or effect parameter).

It also has a "Zoom Browser" touchscreen, placing his finger on the search button in the center (relaxes when the finger is removed).

4 Hots cues instantly accessible and the other 4 by pressing "SHIFT + FLOW" (could be adjusted in TP2 by simply pressing "FLOW" in the options of X1).

Pleased with my investment, I even take into account a second to change TP2 4 + 4 Decks and FX have a touch control as described above effects and loops.

Gabiche's review (This content has been automatically translated from French)" Good but little trouble ergonomics for my taste."

Native Instruments Traktor Kontrol X1 mk2
4
I had the MK1 models, so I went to the MK2 model.

What motivated me to take?
I missed the first model a function to move into music very quickly. Basically, I needed a "pitch-bend".
This number two versions on paper exactly met my expectations, and also on the ground.

Overall, I am satisfied with this product because it is fully integrated with Traktor.
However, I prefer the MK1 version which mainly concerned the navigation tracks. I loved having a knob per track. on the Mk2 version was a knob for both tracks, with two clickable buttons to say on which track you have to load the song.

It is a product that I recommend without problems, it is ideal for controlling Traktor without using the mouse.

I used the Kontrol X1 long but I had remapped almost entirely to have the four cue points on the blue button at the top and a new assignment for the tempo bend the four decks (who started the mix on decks, I mix without synchronization, and I hold to the ear). Discovering the news NI, I was always super interested in the new version which is exactly how I use both for cue points for calibration with ribbon, much faster, tested and approved.) In addition, I mix more internally with the S4 but I passed externally with a Xone 42 (I could not leave the plates but the mixing desk), and the only thing that I miss me when I resold the S4, is the indicator of the loop length, I lose time every time to watch television on my macbook 13 '. Ba good here, the new X1 is at home since yesterday and it is exactly what I needed.

The positives:
- The same quality as other NI controllers
- Perfect ergonomics for my playing
- The new ribbon control super convenient to stall but deadly in use with the flow loop function.
- Display of loop length

The negatives:
- As for the S4 or F1, you do not have access to mapping factory, we can still get along but it is much less convenient and I have not been able to map the ribbon or something else, or other buttons "shift" mode.
- I thought we could change the color of the cue buttons to better identify the computer but in fact their color depends on the type of cue (loop, grid, cue ...) so if you have four normal cue, they are blue (besides, I do not know where they found the violet color you see on the pictures to cue 1)

In any case great buy, no big surprise, but it's a great evolution of the X1 as well designed as the rest of the Traktor range, if it suits your type of game, go for it

Published on 07/16/13
Native Instruments unveils the next generation of its Traktor Kontrol X1 controller, with a new modern look and improved controls.