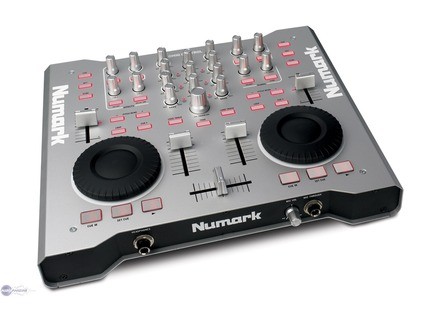 Numark OMNI CONTROL
4
How long have you been using? 1 year

Did you try many other models before buying it? Not

What is so special that you like most and least? the table + solid, well to start, provided with good software (the Trakor) which is very convenient.
the -: scratch bad wheel turns too much like a toy.

How do you rate the quality / price? good

With experience, you do again this choice? at this price point, yes
Did you find this review helpful?yesno
»

drbluet's review (This content has been automatically translated from French)

Numark OMNI CONTROL
5
- What characteristics have motivated your choice?
Console while a beautifully crafted, with good ... beautiful ... backlit buttons, faders that appear robust.

- For what purpose?
Evenings: all animation (old. ..) style 30 to 300 people
House: electro mix on my couch, where the desire for a console not too large.

- Which instruments and systems (console, preamp, DTD ...) do you use the connection and how?
Evening all depends of the evening, but tested on a large (at my level) system on Saturday, behringer mixer entry 750 (with RCA), and from there: equalizer output to 2 / 2 amps / 8 columns we speak / XLR. (About 3000 watts output, but I have more names in mind.)

Very good sound, despite the mp3 to 128 bits, the volume remains in against much lower in comparison with a CD player plugged into the same table (so-sure to gain ....)
Note also that the microphone volume even at maximum is not very strong.

Installation done smoothly, drivers recognized immediately (I'm on Win XP), setup is relatively easy (assignment files provided and midi learn) by against the manual is not very thick and assignment of LED application search (not found any official information, so I had to fiddle a bit, see section tips)
A small downside to nitpick ... Cue lots of buttons sth, sometimes for very different functions that helps a little confused ...

The drivers seem stable, had no concern for latency yet I am at least (you must stop the cons by antivirus programs and asking a lot of resources.
I use this console with traktor pro, despite being on Virtual DJ since its inception. But virtual DJ does not support (for now ...?) not LED, and with a nice camera like that would be fished to see them light up ....... but if not tested with Virtual downloadable assignments and everything works great.

I use it for some months, but Saturday she finally served at a party with a real installation as the level that light, which allows me to post after what she really tested in the stomach as well as readers CDs were installed and ready to turn, these have served only 10 minutes in the early evening, time to stop the antivirus and Ad-Aware, I had forgotten to do.

I have the EKS XP10 specifically designed for Virtual DJ, since their inception. and it's a bit the only comparison I have, but that's what I like the numark above all: the quality of the buttons I regretted against the jogs of XP10.

But this machine has an excellent value for money, and if I had I redeem one tomorrow.
Did you find this review helpful?yesno
»

smaxbzh's review (This content has been automatically translated from French)

I just bought the numark omni control of (small console that connects to a single computer), and when I plugged into my Powo POWER WORKS is to say that I plug the PC has the Omni Control, then the omni control my table mix, then mix in the table Powo. When I turn everything but the omni control is not connected to PC via USB "no pb" (qd but the goal is to have sound ...) and I ds branch the Omni to the PC via USB, wind noise, unbearable, I ds up the sound, the sound takes over, but it still perceives the breath (qd musik rallenti or is lower by example).
Are what quelq'un'll have an ide solution that pb?
2nd small point, it happens that from time to time, an acute graissillement is superimposed on the musik, removing acute mdiums, we always hear, and that's after a second that this graissillement disappears by itself ... (The Omni Control is new head! =)

It'll be cool if one of you had the ide solution? thank you in advance!

The drivers are stable?
Are they often put day?
What software do you use most often?
What you get lag?
How many tracks you get record / playback simultanment? ...

Installation is no problem it?
Have you experienced any incompatibility?
Gnrale configuration is easy?
The manual is clear and sufficient? ...

How long have you use it?
What is the particular feature you like best and least?
Have you tried many other models before acqurir?
How do you report qualitprix?
Exprience with, you will do again this choice? ...

moontoto's review (This content has been automatically translated from French)

Numark OMNI CONTROL
3
Which is very good with this kind of product, they are completely adapted to the software mix. Not need extensive knowledge in MIDI. A little reading, a little logic and you're done when you synchronize with the TRAKTOR example.

I've served on all types of systems. The walls of the big room sound sytem. A board that level, like any electronic instrument, always have a friend who knows about his adjustment to the amp ^ ^.

Should know that my first purchase a laptop before you buy the OMNI. It is very important to note, because a low-end computer will meet more often technical problems. There has only to look on the forum, others like myself have had bugs incomprehensible.
Then they will tell you it takes ASIO4ALL, but it's wrong. If it does not work, your computer is not made for that, or at least not for long.

Installation neat and fast. The launch of Traktor LE is easy. Then, in TRAKTOR PRO it gets harder ...

After a year and a half good and loyal service, I went to the next level. Certainly it is very good at first, but then there was not shit, a pair of identical plates is much better.
Me what bothered me most about the OMNI, the bugs are too repetitive in sound. It is unclear if the program does kidding, the computer that is not performing or operating system ...
A priori, not all on Mac computers, but be sure you'll have a blast enough to break in your first dj set. Good start for
Did you find this review helpful?yesno
»
Read the 5 user reviews on the Numark OMNI CONTROL »