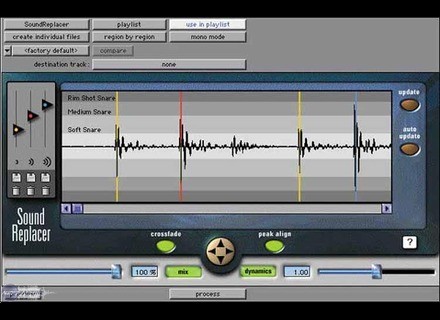 Digidesign Sound Replacer
Digidesign Sound Replacer was easy to install as I had no compatibility issues or other problems at all. I had the plug-in up and running very quickly and since it is a Digidesign made plug-in and I run it in Digidesign Pro Tools LE, it has perfect compatibility and has always running pretty smoothly for me. The interface of the software isn't incredibly hard to figure out as everything is easy to access and is put in terms that anyone can figure out. I don't have the manual for this plug-in but unless you are new with digital audio it isn't a necessity as it is easy to figure out.

I've never had any problems running and using Digidesign Sound Replacer as it has always run stably with my configuration. I'm currently running the plug-in on a Mac Book Pro that has a 2.2 Ghz Intel Core 2 Duo processor and 4 GB of RAM. I run the plug-in in Pro Tools LE 7.4 that runs off of a Digi 002R audio interface. I never really run more than one of these plug-ins at a time because of the nature of this plug-in, so I can't speak to how well it would run if you wanted to run a few of them at once but I can't see why you would really need to do that anyway.

I've had Digidesign Sound Replacer for about two years and while it is possible to do what this plug-in does without this particular piece of software, having it makes the process a whole lot easier. I use it when I feel that the drum sound I have isn't all that great and maybe some of the drums need an extra boost. Unless you are doing this frequently though, I wouldn't recommend this plug-in simply because you can do this without using this plug-in. Overall, a very useful piece of software that won't break the bank.
Did you find this review helpful?yesno
»