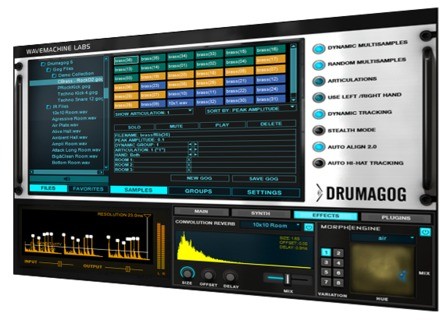 Wavemachine Labs Drumagog 5
4
Drumagog 5 has a great user friendly interface; it is easy to navigate through and leaves out all of those poor submenus with little text. It comes with right around 4 GB of sample library to use and allows you to trigger your samples quickly and swap them out fast.

Drumagog 5 will let you open up your VST inside of it like Kontakt. Opening up Kontakt right inside of it is quick and easy and put all of my favorite sounds right at my finger tips inside Drumagog 5. One thing that is different from the other versions of Drumagog is that the morph engine is great; you can change the sound of everything really fast. Just with the push of a button you will have a completely different sound.

The main reason I use Drumagog so much is sometimes I don’t like the snares that I used and have. So all I have to do is load them u in Drumagog and it will give you a whole new snare really fast. It is part of my creative process not to throw my drums in this plug-in jus to see what cool things it can do with it.
I was definitely concerned with the price of Drumagog 5 though, now they have platinum edition out and it cost even more. I think they price is a little too much unless they juice up the effects library and let you manually choose from a ton of effects. There is no doubt that the morph engine is awesome but when it comes to manual changing things they way you want them to sound can get a little difficulty and it will take some time to actually do it. I have not had another software like this one though so I will continue to use it and upgrade it whenever a newer version comes out. It is very stable!

Wavemachine Labs Drumagog 5
5
There are no compatibility issues that I know of as far as our studio setup is concerned. I've only used this software on our Pro Tools 8 HD setup at our studio, so I don't know how it responds to home LE systems. The manual is pretty clear on how to use the software, in fact it's one of the most informative manuals I've seen in a while. It's certainly tedious in the sense that it is positively loaded with information, but that's a good thing as Drumagog is certainly a multi-faceted program. The setup was pretty simple overall. The functions of drumagog are really easy once you have them figured out.

I've never had an issue with Drumagog not working properly, in fact it's been remarkably stable. While it might take a little while to load, it's never more than 5 seconds or so. I've only been using Drumagog for a few months now but I feel as though I've been using it forever. It's definitely a quick performance, as in, I get results quickly.

While I definitely have always had an issue with people taking drum samples and using them to replace drum tracks, that's another issue for another debate. When it comes to the software itself, Drumagog makes that process remarkably simple. This is a process that used to take hours for an engineer to do just to finish one song.
The amount of samples of different songs are great, in fact they have such a wide variety that I feel there is something to use for everybody. Samples ranging from Motown to Led Zeppelin to others give you quite a variety. The simple replacing of waveforms make this really easy. While I'd definitely say that this is easier with some music than others, the fact is that so much music nowadays has relatively simple parts and the snare samples can be replaced easily, as can toms and kick drums, even cymbals. Not only do they provide samples of other acoustic drums, but you can provide electric and processed drum sounds as well.
While I have an issue with this when it comes to recording certain types of music, I'd certainly say sounds like this are necessary when recording certain kinds of electronic-based rock music. Fans of Muse and other groups like them would certainly find much to use here.
This software is expensive, so I'd say only purchase if a) you own a professional studio or b) you record a lot of acoustic drums, and wish to be able to switch back and forth between acoustic and samples. Otherwise I'd say just buy a drum machine or something, but if you need both, Drumagog is the way to go.
Did you find this review helpful?yesno
»

Wavemachine Labs Drumagog 5
5
I bought it directly on the site of the state drummagog United States (Chicago) and paid in dollars.
I initially bought the basic version, but I quickly opted for the pro version.
After purchase, I downloaded from the site.
The installation was very simple, working under macpro it is almost done alone, integration into Cubase was super intuitive.
Departing not easy to understand (a problem user manual in English) how to use and especially how easily installed on a slice of mix, but in testing, ultimately there is no magic.
No incompatibility issue that has become a huge workmate for recycling afternoon of processing drums recorded analogically.

I work in a big config, mac pro 12 core (2.66 Ghz) 24 Giga of ram, 4 Tera hard drive, graphics card 2 1 Giga each DSP card and universal Quad Omni 6.0 audio so I don ' have no idea how it works in smaller config, but with me there is no problem, it runs like clockwork and is a perfect stability, integration into Cubase is of the same order.

I use it for over 2 years and I do not count the number of times it has saved mix battery were wrong board (problem of sound quality battery, such as a snare drum that sounds like a pot, kick that did not sound workable or rotten tom ..)

So I do not use it for programming drum beat, but to convert eg a snare signals noon and where there is great is that it takes into account the velocity of the impactor and the volume after adjustment by the user of the conversion sensitivity.
The conversion is done via the settings very intuitive that captures your drummer play with great precision and especially keeping the human side.
The basic version only allows 5 drummagog replaced eg snare live mix, installation on the edge of the snare track and sending the recorded signal in the midi sampler drummagog 5.
It was not practical because I did not take the power of BFD 2 and more live conversion was necessarily intensive computational resource (although I have not really felt or measured on the basis of the power of my config)
The basic version are Features are only snare sound, no need to explain that it is zero.

But the pro version 5 Drummagog allows installation on the track after example of the snare analogically recorded (sorry but I will always take this example) to write a midi track of it and then assign it to the any sampler midi (BFD 2) and allow the advantage of great snare sounds very natural twelve o'clock.

This strengthens the drum mix, make very large dynamic on the kick and snare, tom have much impact with, or even replace the complete unit in the mix of the battery, just awesome everything becomes flexible.
Attention despite everything, because during the conversion live, write latency is clearly visible which requires resychroniser the MIDI track with audio, in this case it is necessary to move the midi track to deliver in line with the mix.
It is also verified that the conversion did not take Tom neck for example (which is very strong in making its micro snare) transcribed in neck snare drum Drummagog 5, in this case, it simply clears necks in the midi track too.

The value for money seems to me honest, I must say that the price I do not care a bit of time (and this is the case) the app works perfectly and it does the job for which I bought no problem.

For me, I have adopted and question me in the past.

Drummagog also proposes Kits Battery sampling high mark in the higher versions, but beware price level that badly off, but considering the quality of the software, but I think I have not tested the quality should be excellent.

According friends with what I have discussed this app and also working in the studio with larger versions of the mine Drummagog 5 is a tool after them very reliable and professional but I've never been able to test myself quietly.
Did you find this review helpful?yesno
»