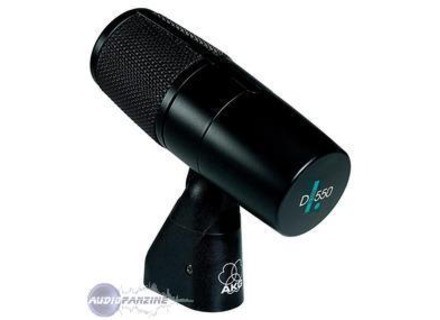 Product replaced by the AKG D 40.

themaddog's review"Picked up for a bargain price, but a great mic!"

AKG D 550
4
I bought this from Guitar Center from one of their closeout sales years ago. It is a dynamic microphone intended on kick drums and bass instruments like tuba. Although I have yet to mic a tuba with it, with the proper placement this mic can make a kick drum sound pretty sweet.

To make a kick drum sound full, this mic requires a little boost around 100-150 hz. Since I only paid $50 for it on a whim, I wasn't expecting it to sound amazing, but like I said, with a little EQ you can get some pretty good results for the money. Just like EQ'ing the low-end, some midrange EQ can bring out a really nice "thwack" out of a kick drum with this mic as well. That being said, I wouldn't spend much more than $50 for it new. Since I bought it 8 years ago, it's held up very well and not given me any problems despite seeing a lot of studio work, which is certainly a tribute to the build quality of AKG products. I've never owned another kick drum mic, having only used Shure SM 57's on the kick in the past. This produces a similar result, but with less emphasis on the high end, which of course you wouldn't want from a kick drum mic either. I've never used it to mic a bass cab, so I can't speak on how positive those results would be. If it finally croaked on me, I don't think I'd buy another one - unless I was able to snatch it up for a deal again - but would instead go for a higher end mic, like one of the Shure kick drum mics. Of course, those mics are much more expensive, but for someone on a budget this is a great kick drum mic!
Did you find this review helpful?yesno
»

miles1981's review (This content has been automatically translated from French)

Qqs use since months now, a peavey bass amp for live sound.
Fixation on a non pb standard microphone stand.
Good quality, a choice to redo in the price range.
Did you find this review helpful?yesno
»

Yjanet's review (This content has been automatically translated from French)

I did that for several days, but the battery of tests that I made him move proved interesting because its performance is very complementary to the rest of my microphones.

- Low tom and bass drum: correct
- Djembe: the sound is great for taking down, unlike the above which are taken flat.
- Alto recorder: to forget immediately
- Trumpet: The result is way too steep for the micro power.

However, I regret the lack of gain (that is probably what makes it does not catch on too quickly?)

The quality / price is right, having bought 50 € nine, knowing that complete my collection in an area where I still had no competitor. If I had to redo the choice, I would without doubt take a ride on the side or Sennheiser Thomann (Tbone) is to find an equivalent rate of interest, or his master.
Did you find this review helpful?yesno
»