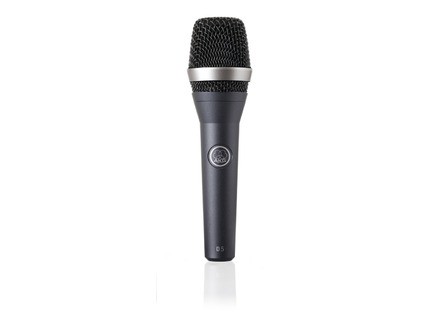 View all offers for AKG D5 »

AKG D5
4
The AKG D5 is a vocal microphone that can be used for our lead and backing vocals. It does a great job of not picking up much external noise from the rear and sides of the microphone. It is a super cardioid microphone with a frequency range of -70Hz to 20kHz. If you have a softer voice you wont have to worry about it with using the D5, it will still bring your voice to the for front with just a little EQ boosting when you mix and master your final track. If you have a deeper toned voice this is where the microphone could use some work, it will really over due your low tone and can make it muddy if you are not careful. It works so much better if you have a “lighter” voice or a female voice it sounds amazing. For the price of the D5 you really can not expect to get a better quality, most of its competitors will charge you almost double what the D5 cost to get the same level of quality. I have only used this microphone for recording purposes and never seen it used live.

My favorite part of the D5 is for the songs or vocals that are not punchy and are more mellow, it will still bring your voice out very clear (with a little EQ boost). But like I said it does need some work on a male voice that is deeper, you will have to do some cutting of the low frequencies in order for it to be clean. The value of this microphone is great for the price which is less than 100 dollars now. I have used a ton of microphones that are use for voice and this one does not stand out, but it doesn’t sound bad either. It is ok, if you only have about 100 dollars to spend for a vocal microphone for your home set up. This one should do the trick with no problems.

AKG D5
4
TThe AKG Acoustics D 5 is a microphone that is designed for hand held vocal use in a live setting. It is AKG’s current entry in the world of these types of microphones. It is a dynamic microphone, as one would expect in this price range and model or line, but the real kicker and appeal of this microphone is its engineering specifically in mind of keeping bleed to a minimum and the reduction of the handling noise and feedback on stage, eliminating many logistical errors from the setup of a show. This is accomplished by the polar pattern. AKG chose to make the D5 a supercardioid microphone, which means that the pickup pattern is far tighter than the typical cardioid pattern that one might expect. This also allows increased gain before feedback. What is particularly special about this microphone is its patented Varimotion diaphragm, which means that the microphone’s diaphragm varies in thickness. This is not a new trait, but the patent is for the manufacturing process that makes these advanced technologies available at a lower cost than would be otherwise. The D 5 has a frequency response from 70 to 20,000 Hz, and it is capable of handling sound pressure levels of up to 147 dB. What makes this microphone very appealing sonically is the gentle low mid presence boost and a bit of air on top, helping it cut in a live situation.

The AKG D 5 ended up sounding quite different from the venerable Shure SM58, and its tone was a bit less crunchy, despite its air. It does not endeavor to smooth anything out, though, which makes the D 5 a bit more suited to certain smaller venues than the SM58 and softer music as well. The SM58 cuts more than this microphone, but often, I find it too aggressive, and that is where the D 5 shines.

What kind of mic? (for vocals, instruments, both...)
Great-looking, sturdy and well-finished mic for vocals
The technology? (electret, condenser...)
Dynamic microphone. See specs on the AKG website

Which feature do you like best?
Its warm presence in the low mids, which is quite surprising for a dynamic mic in this price range!
Its response through the whole frequency range is not bad at all.
Which feature do you like least?
1) You need and EQ in the low mids to control the sound.
2) Handling noise requires a low cut (like many other mics with a similar price tag)
Did you try any of other models before buying this one?
For people who want to emphasize low mids on the vocals on stage, it's better than a SM58!!!
How would you rate its value for money?
Excellent!!!
Based on your experience, would you buy this product again?
Yes
Did you find this review helpful?yesno
»

AKG D5
5
- What type of microphone? (live, recording, mixed...)
Live, but i guess you could use it for recording too...i mean people use SM58's for recording, and this is much better than that...

- What technology? (electret, condenser...)
It's a standard dynamic mic with an on-off switch.

- For how long have you been using it?
I've had it a few months, used it for a rehearsal and a live gig.

- What thing do you like most/least about it?
It's cheaper than an SM58, looks better, feels better and sounds MUCH better. What more could you ask for? Oh: it's better at feedback rejection.

- Did you try many other models before getting this one?
I've owned a Shure SM58 (sold cos it was rubbish) and a Sennheiser BF812 (wasn't much good either so i sold that too). I've tried others too and this was the best.

- What is your opinion about the value for the price?
I paid 90 €, ie less than for an inferior Shure SM58.

- Knowing what you know now, would you make the same choice?...
Of course i would. This is probably the best dynamic hand-held mic in this lower end of the market. I think you'd have to spend a loooooot more to get better. Who said KMS 105 ?

Did you find this review helpful?yesno
»
Read the 11 user reviews on the AKG D5 »

AKG D5 manuals and other files