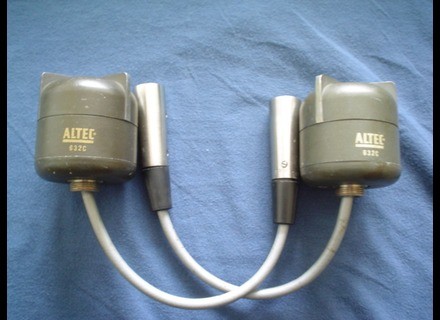 Altec 632c
4
The Altec 632C's are vintage and unique moving coil dynamic microphones. I'm not sure how old these microphones are, but they look like they could be as old as from the 1950's. The mic has a somewhat limited frequency response, starting at 100 Hz to 10 kHz. When these were made this probably wasn't much of an issue, but these days you generally what to be able to capture higher frequencies than this. Having said this, if you use the 632C properly, this probably won't be a huge problem. By properly I just mean using the mic in situations where it's not going to be critical to capture those super high frequencies.

I haven't used the Altec 632C all that much, but I have tried it out for drums - namely on the bottom and top of a snare drum. I've only been to one studio that has this mic and they spoke pretty highly of it there so I decided to try it out. While it wasn't the best fit for the bottom of the snare, I found it worked well on tom toms and the top of the snare. Having said this, I still didn't prefer it to the sound of a Shure SM57 on the top of the snare and I didn't end up using it in the end. While it's certainly not a bad mic by any means as it's actually quite good, the studio had other microphones that I preferred in the end. That's not to say that next time I'm over there I won't try it out again to see if it will work on some drums as it's definitely a cool microphone worthy of use. I don't think that it's worth it to seek out a 632C since they are probably hard to find and not worth all that much, but if you're working in a studio that has one, I'd recommend checking it out if you see an application where it might work.
Did you find this review helpful?yesno
»