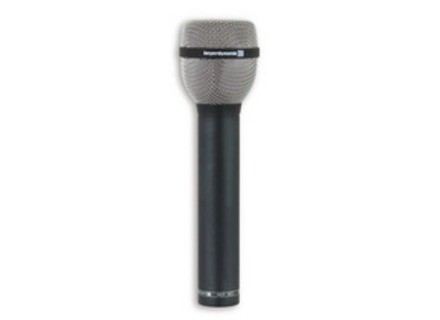 M 69 TG, Dynamic Microphone from Beyerdynamic in the M series.

Beyerdynamic M 69 TG
5
The BeyerDynamic M 69 TG is a dynamic microphone that is designed for use in the studio or for live shows. My experience with the M 69 TG is in the recording studio to record a variety of different applications. Let me start off by saying that I think BeyerDynamic does a great all around job with their microphones, as they are generally reliable and sound great. The M 69 TG in particular is a very impressive microphone for a few different reasons that I'll get into in the next section. In terms of characteristics, the mic will pick up sound in a hypercardioid pick up pattern, meaning that it has more sensitively in front of the microphone and less on the sides. This type of pattern can be useful in situations where you're looking to get a signal dead on and not too much sound directly around where the source of the sound is. The M 69 TG will pick up frequencies between 50 Hz and 16 kHz, which is adequate for the types of applications that I've been using it for. I've never seen a manual for this microphone, but a specs chart would be adequate for it.

For getting an up close and personal sound, the BeyerDynamic M 69 TG does a great job. It's perfect for recording electric guitar, a bass guitar amp or keyboard amp, drums like tom toms or kick, and even things like brass and vocals. It's really just a great all around sounding microphone for recording anything where you would want to capture it's signal directly on. The price definitely isn't unreasonable for a microphone for this caliber with this much versatility. So while it's accessible for home studio owners, it's really a professional's microphone in the end. I'd definitely encourage all studio owners out there to check out the BeyerDynamic M 69 TG to see if it's something you might want to add to your rig.
Did you find this review helpful?yesno
»

PS: The photo is the not the M69TG M69N (The M69N is 10 years older and is no longer marketed it was replaced by the M69TG that the Gill Black).

jerhexa's review (This content has been automatically translated from French)" Mr. stage!"

Beyerdynamic M 69 TG
5
Dynamic type microphone for voice, guitar amp plug and toms.
freq: 50hz to 16 Khz
for the rest, see their file on the site of Beyerdnamique.
The microphone is a correct weight (320 gr) and looks pretty robust.

I use it for two days (one studio and a concert setting):

Studio:
I plugged in to adjust my effects pedal (boss ve prepared 20 concert) and do some comparison tests with the Shure SM 58 (all connected to a sound card EDIROL FA 66 and in front of Fostex PM 2 MK 2 + fostex sub).
I first sang in the Shure Beyer and I plugged the ... and boom! 6 db more!
As a result, I put the same level of volume:
The Beyer is much "cleaner", especially in the bass.
Which is sung at the bottom (test: With or Without you-U2) or High (Show Must Go On-Queen) the sound is warmer than the shure.

In concert:
Good balance and no feedback with distortion effects into the microphone, it's a great test (even a very high level of return ... and I mean very high level ... it's very hard ! I have halved Rock concert ...).
In general, the voice was good in the mix it is a low volume of voice or by pushing a little (compressor pedal set quiet ...)

Apparently taking on guitar amp, it looks nice: I test it soon with an RME.

I did not really find faults (it's been two days that I have). The only permanent use would be very close to the microphone, but this technology is also that there is no feedback and you soon ... all times, watch out for popping, but it's manageable.

I compared as was the Shure SM 58. I have often sung on stage a. The Beta 87 Beta 87 is sharper, but picks up everything that passes is a normal static). For more Rock my world, I prefer the Beyer live.