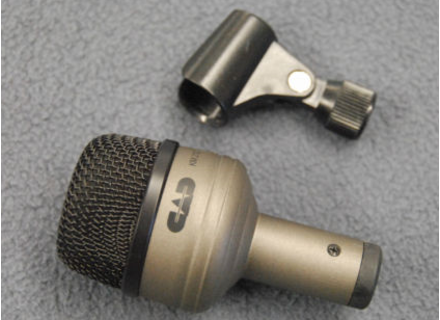 CAD KM212
3
The CAD KM212 is a microphone designed for recording kick drum and other bass instruments, that comes within a few different CAD drum microphone packs. We have one of these CAD drum mic packs at the studio where I work, although I'm not sure exactly which one it is. This mic doesn't really ever see any use at the studio where I work, as we really just have the mic pack as a back up for if we ever were to need a couple of extra cheap microphones. The KM212 has a cardioid polar pick up pattern, with a frequency response ranging from 50 Hz to 16 kHz.

I can't say that I would ever used the CAD KM212 on a session unless I had to. While it's an okay enough microphone for the price and considering that it comes in a drum pack, it's definitely not a professional recording microphone. I've used the KM212 twice in the studio, and have never used it in any other setting, although this mic would probably best be suited for live sound reinforcement. I've only used the microphone as an extra kick drum mic, and haven't used it for anything else, although CAD recommends it's use for bass guitar cabinets and floor toms as well. While on it's own you could probably live with the sound you get from the KM212, once you put it up against something like an AKG D112 or a Shure Beta 52A, you'll instantly notice a difference in low end clarity, and clarity in general. You can't buy the KM212 on it's own, so if you want it you'll have to buy one of CAD's complete drum packs. The only time that I'd really recommend doing this is if you're looking for some extra drum microphones for cheap to have as a back up, or if you're just get started. Even so, there are probably better ways you can spend your money...