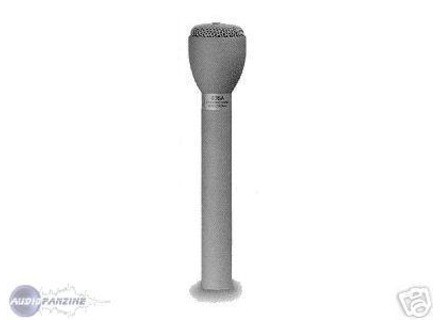 635A, Dynamic Microphone from Electro-Voice.

View all offers for Electro-Voice 635A »

Electro-Voice 635A
5
*Microphones are very subjective. Some microphones that work for some brilliantly may be disastrous on others. It is therefore important to understand the context in which this review is written and take it with a grain of salt, like all reviews on microphones should be treated.*

The Electro-Voice 635a is a vintage omnidirectional dynamic microphone that has one of the most stellar reputations among news crews and older singers. A strange demographic of people that seem to overlook it: yep. You guessed it. Studio owners and recording engineers, from what I've seen at least, appear to be blissfully unaware of this absolute beauty, or have a bit too much money invested in tens of newer microphones to truly appreciate it.

If you look at the specifications sheet, you are not likely to be terribly impressed by what you read. The first thing that will probably pop out at you would likely be the frequency response: 80Hz-13000kHz. Not exactly something that impresses anyone.

Of course, we as mature people, are only going to take specs as reference, and judge the microphone based on, of course, sound. And...wow. You would not believe the sound that comes out of this microphone. Granted, it does have a bit of that low-fi dullness likely caused by the high frequencies ending at 13kHz, but for $50 on the used market and $100 new, there isn't a lot of commitment in buying this microphone. It's nonetheless VERY impressive as it is. What affirmed this microphone for me was when I had to use a single 635a in a pinch to record a string quintet. It wasn't even fair how good the end product was.

And furthermore, while the microphone is omnidirectional, my friend, who works exclusively in live sound with his band, tried it out through his 400W speaker. It was completely devoid of feedback. If you YouTube this microphone, you'll see it being used live all over the place, but I hadn't at the time, so this blew me away. He bought the microphone from me immediately.

*Hint: When using it for studio vocals, boost the bass just a couple dB or so around 200-300Hz and raise the highs above the frequency response to give the sound some air.

If I had one gripe about the Electro-Voice 635a, it would be that it's relatively low-output, so you need to make sure you have a pretty good and quiet preamp to drive it. And there is the issue of noise. It's a little higher than it should be, but it's ultimately nothing to complain about.

Before I go, I also would like to mention that this microphone is almost indestructible. Go on eBay and look for some used, beat-up models that still function perfectly. This quality earned the 635a the nickname "The Buchanan Hammer."

There are newer, more expensive versions of the 635a out, with N/D magnets, going for closer to $200. I would certainly like to own one of these, but quite frankly, I don't think they're worth it when you can find these for $50 on eBay. Give them a shot. You won't be disappointed!

Electro-Voice 635A
4
The Electrovoice 635A is a unique dynamic microphone.  I have only used the mic in the recording studio rather than for live sound, but I would think that it would be useful in both situations.  The mic has an omnidirectional polar pick up pattern and is hand held, which is what makes me think it would be suitable for live shows.

I first used the Electrovoice 635A about two years ago and right off the bat I was a fan of it.  While it isn't anything too special in terms of sound quality, it is a sturdy, well built microphone that I think it suitable for a variety of applications.  I only used it on two instruments in the studio - snare drum and electric guitar, but I think that it would make a good vocal mic in a live situation.  The sound quality is super clean, but is very respectable for a dynamic mic and is also reasonable in price.  While it doesn't beat the value of a Shure SM57, it is in the same price range and does have a similar type of sound.  Electrovoice is known for making some very sturdy microphones, and I think that this is one of the best features concerning the 635A.  While I don't think it would be my first choice in terms of a dynamic mic in the studio, it is still a very good choice and is one that should be explored by those interested in a mic like this.  While I do think it would be a great vocal mic for a live show, I would try it out in this application first as I don't have any experience with it in this setting, it just seems like this mic is catered for this type of use as well as use in the studio.  All in all, the Electrovoice 635A is a very strong microphone that falls right in line with the high quality that Electrovoice has become known for.

Electro-Voice 635A manuals and other files