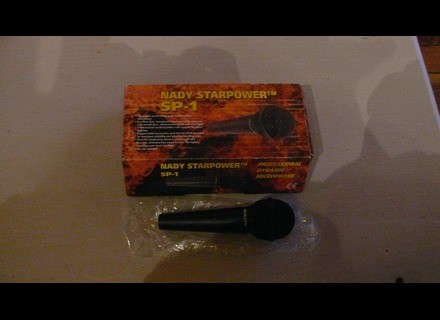 Nady SP-1
3
I needed a mic and boom stand to use for my acoustic guitar in our Praise Band so I was pleased to find this package deal. I wasn't expecting great things for such a bargain price; however, I was really surprised when I tried it out! The Nady SP1 Microphone does an awesome job of picking up my acoustic guitar and the stand and boom is compact yet sturdy and not flimsy at all. The package included a mic clip and 20' mic cable too which was exactly what I needed.


I hardly ever use the Nady, its very rough sounding and sounds muffled, it takes a lot of fiddling with a EQ for it to sound decent. Some good things about this package is, the stand, it's a nice telescoping boom stand that alone usually costs about $25. This is great for musicians on a budget, although It would be a good idea to upgrade. The cable went out within a few months and grill on the mic is starting to break. The material feels like it's good but it breaks down pretty fast. As far as reliability this is a very reliable mic... for a few a years. I'd say this is good for little kids, beginning bands\musicians, or a backup mic. I was very happy with the price, kinda sad to see how it breaks down though. To sum it up, if you are looking for an extremely cheap mic package this is pretty much the cheapest you will find. But don't expect it to deliver or last a long time. If you need a mic fast for cheap this is the one to choose, but you will need to upgrade before to long.

Nady SP-1
1
The Nady SP-1 is a budget oriented dynamic microphone with an on and off switch. Like many handheld vocal microphones, it has a ball grill and uses a cardiod pattern.

OK, for starters, this is a Nady product. Nady makes low end music gear, but the "Star Power 1" (SP1) is low end even for Nady! I've gotten away using Nady products on non-essential stuff, such as their microphone stands. I can't remember why I even bought this mic, maybe I got it for free or as part of a package or something, but this cheap, even for my tastes. It doesn't sound good - at all. If someone is on that much of a budget, he or she would be far better off purchasing a solid used microphone for a few extra dollars, like a Shure SM 57 or SM 58. Those mics are far better sounding and the SM57 is much more versatile.

Still, there has been a few times where having this piece of crap mic around has been beneficial. I've been in a bind where I've been short on mics in the studio so have used it for guide vocals that I know will be re-recorded later. I've also used it as a talkback mic from the console to the talent, and for speaking through headphones in this manner it's not bad; at least my words were audible and quality was not a real concern.

But seriously, even for a middle or high school band… this is a pretty crappy mic. I guess the only reason I’d ever pick one up for a live band is if I truly were on that much of a budget, needed to buy a backup vocal mic (don’t even think about main vocals on this thing), and didn’t have any money to spend at all. At least in this case you’d be making the lead singer sound even better when singing backup through one of these.

Nady SP-1
3
The Nady SP-1 is an extremely inexpensive dynamic microphone designed for live shows and gigging.  While of course it can be used in the studio if you wanted to, I'd strongly recommend only using this for shows.  The mic has an on/off switch and isn't all that well built in general.  The only reason that I got the mic was because it came in a Musicians' Friend pack that also came with a cable and a stand, all at a very low price.  I used the mic for band practice, and shortly after getting it I stopped using it completely.  Getting this microphone was really just a bonus to getting a nice stand for me...

I purchased the Nady SP-1 in the mic/stand/cable combination pack a number of years ago - I actually got two of them.  I figured at the very least I'd have a few new stands and cables, and could use the microphone for band practice as an inexpensive mic to throw around.  For a little while, the mics definitely did the job for me, but this was a while back and before I even had a decent PA system to use, so it was really for the bare bones type of use.  I can't really say that the sound quality of the microphone is good, but within my set up at the time it got the job done for me in my situation.  I'd imagine that there are a lot of people out there who might be looking for an extremely cheaply priced and designed microphone for situations like I had.  However, if you're looking for any microphone halfway decent for practicing or for live shows, I would definitely look elsewhere as there are plenty of cheap microphones out there that sound way better than this and will last a lot longer as well.  I'd only recommend the Nady SP-1 if you're also in the market for a stand and a cable to go along with it, as that is the only way that this microphone would really be worth anything in my opinion...
Did you find this review helpful?yesno
»